A Study on Climate-Driven Flash Flood Risks in the Boise River Watershed, Idaho

Numerical models are key tools to characterize hydrodynamical patterns of coastal environments and anticipate the potential effects of hazardous and extreme events, anthropogenic intervention or climate change. In this work, the openTELEMAC-MASCARET modelling system was selected to represent the dynamics of the Minho estuary, a very shallow estuary located at the Northwestern Iberian Peninsula coast. Calibration and validation results confirm the accuracy of the numerical tool, with small root mean square errors, close to null bias and the close to unit correlation and skill coefficients obtained for water level and currents velocity at several estuarine locations. The obtained results depict a tide dominated estuary with a delay in the tide phase and a marked asymmetry in the tide curve that increases upriver. Additionally, an upstream diminution of M2 and an upstream augmentation of M4 was observed, classifying this estuary as flood-dominated. The represented current patterns show that variations in the intensities of the main driving forces alter the behaviour of the hydrodynamical patterns within the estuary, with a clear dependence on bathymetric and topographic characteristics. During flood events, larger estuarine regions become submerged due to the low margins and the wetland characteristics, highlighting the need for accurate numerical models that can be used as a decision-making support tool for effective and integrated estuarine management. View Full-Text
Keywords: estuarine modelling; hydrodynamics; floods; shallow water estuary; Minho estuary estuarine modelling; hydrodynamics; floods; shallow water estuary; Minho estuary
►▼ Show Figures 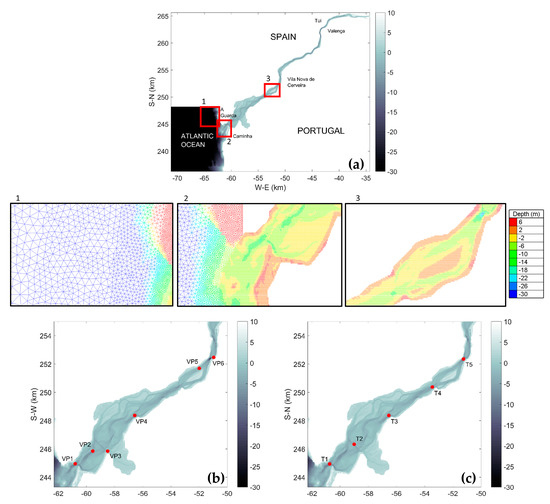