An Overview of Water Markets in Southern Africa: An Option for Water Management in Times of Scarcity

We analyzed the alteration of discharge and water temperature caused by two newly established reservoirs in the lower reaches of the Jinsha River. In comparison to longer-term observations from the pre-impoundment period, the seasonal flow variability was significantly affected by the larger, upstream-located Xiluodu reservoir, with higher discharge in spring and reduced discharge in summer. The smaller, downstream located Xiangjiaba reservoir did not contribute significantly to the total hydrological alteration caused by the reservoir cascade. Thermal stratification occurred in spring and summer in the Xiluodu reservoir, but was not observed in the Xiangjiaba reservoir. The vertical structure and seasonal dynamics of thermal stratification were mainly governed by the water temperature of the inflow and the depth of the water outlet. Despite the different thermal structure, both reservoirs reduced the amplitude of annual temperature variations and delayed the seasonal temperature cycle in the downstream river water. In contrast to discharge variation, thermal effects were cumulative along the cascading reservoirs. Homogenization and delay effects can be expected to increase further with the completion of ongoing reservoir construction upstream of the two studied reservoirs. Based on our findings, we discuss the larger-scale impacts of cascading hydropower developments and emphasize the need for taking water temperature and its variation into account when developing optimized operation or mitigation strategies for these systems. View Full-Text
Keywords: flow alteration; thermal regime; stratification; cascading reservoirs; cumulative effect flow alteration; thermal regime; stratification; cascading reservoirs; cumulative effect
►▼ Show Figures 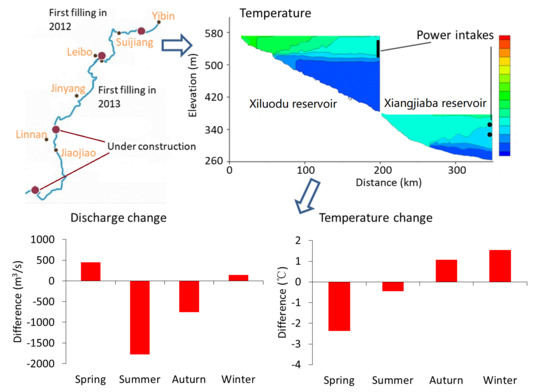