This article illustrates the impact of potential future climate scenarios on water quantity in time and space for an East African floodplain catchment surrounded by mountainous areas. In East Africa, agricultural intensification is shifting from upland cultivation into the wetlands due to year-round water availability and fertile soils. These advantageous agricultural conditions might be hampered through climate change impacts. Additionally, water-related risks, like droughts and flooding events, are likely to increase. Hence, this study investigates future climate patterns and their impact on water resources in one production cluster in Tanzania. To account for these changes, a regional climate model ensemble of the Coordinated Regional Downscaling Experiment (CORDEX) Africa project was analyzed to investigate changes in climatic patterns until 2060, according to the RCP4.5 (representative concentration pathways) and RCP8.5 scenarios. The semi-distributed Soil and Water Assessment Tool (SWAT) was utilized to analyze the impacts on water resources according to all scenarios. Modeling results indicate increasing temperatures, especially in the hot dry season, intensifying the distinctive features of the dry and rainy season. This consequently aggravates hydrological extremes, such as more-pronounced flooding and decreasing low flows. Overall, annual averages of water yield and surface runoff increase up to 61.6% and 67.8%, respectively, within the bias-corrected scenario simulations, compared to the historical simulations. However, changes in precipitation among the analyzed scenarios vary between −8.3% and +22.5% of the annual averages. Hydrological modeling results also show heterogeneous spatial patterns inside the catchment. These spatio-temporal patterns indicate the possibility of an aggravation for severe floods in wet seasons, as well as an increasing drought risk in dry seasons across the scenario simulations. Apart from that, the discharge peak, which is crucial for the flood recession agriculture in the floodplain, is likely to shift from April to May from the 2020s onwards. View Full-Text
Keywords: SWAT model; climate change; scenario analysis; hydrology; return probabilities; hydrological extremes SWAT model; climate change; scenario analysis; hydrology; return probabilities; hydrological extremes
►▼ Show Figures 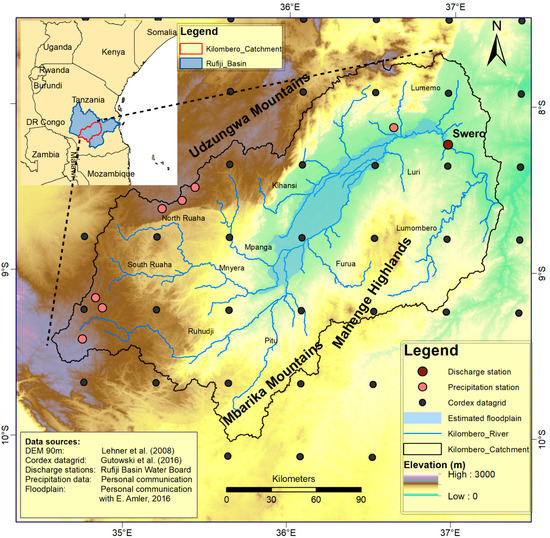