Unpacking the Drivers of Stakeholder Engagement in Sustainable Water Management: NGOs and the Use of Facebook
Previous Article in Journal

Concentration Detection of the E. coli Bacteria in Drinking Water Treatment Plants through an E-Nose and a Volatiles Extraction System (VES)

Water quality control remains an important topic of public health since some diseases, such as diarrhea, hepatitis, and cholera, are caused by its consumption. The microbiological quality of drinking water relies mainly on monitoring of Escherichia coli, a bacteria indicator which serves as an early sentinel of potential health hazards for the population. In this study, an electronic nose coupled to a volatile extraction system (was evaluated for the detection of the emitted compounds by E. coli in water samples where its capacity for the quantification of the bacteria was demonstrated). To achieve this purpose, the multisensory system was subjected to control samples for training. Later, it was tested with samples from drinking water treatment plants in two locations of Colombia. For the discrimination and classification of the water samples, the principal component analysis method was implemented obtaining a discrimination variance of 98.03% of the measurements to different concentrations. For the validation of the methodology, the membrane filtration technique was used. In addition, two classification methods were applied to the dataset where a success rate of 90% of classification was obtained using the discriminant function analysis and having a probabilistic neural network coupled to the cross-validation technique (leave-one-out) where a classification rate of 80% was obtained. The application of this methodology achieved an excellent classification of the samples, discriminating the free samples of E. coli from those that contained the bacteria. In the same way, it was observed that the system could correctly estimate the concentration of this bacteria in the samples. The proposed method in this study has a high potential to be applied in the determination of E. coli in drinking water since, in addition for estimating concentration ranges and having the necessary sensitivity, it significantly reduces the time of analysis compared to traditional methods. View Full-Text
Keywords: E. coli; drinking water; electronic nose; volatiles extraction; data processing E. coli; drinking water; electronic nose; volatiles extraction; data processing
►▼ Show Figures 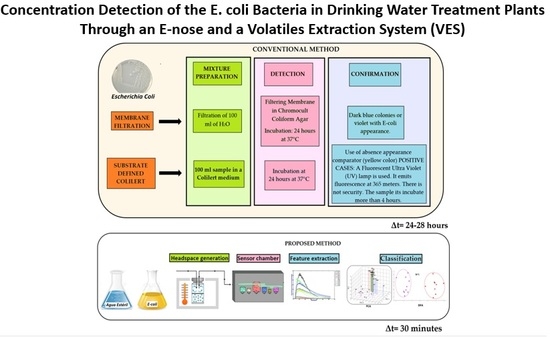