Hydrological models are widely used for many purposes in water sector projects, including streamflow prediction and flood risk assessment. Among the input data used in such hydrological models, the spatial-temporal variability of rainfall datasets has a significant role on the final discharge estimation. Therefore, accurate measurements of rainfall are vital. On the other hand, ground-based measurement networks, mainly in developing countries, are either nonexistent or too sparse to capture rainfall accurately. In addition to in-situ rainfall datasets, satellite-derived rainfall products are currently available globally with high spatial and temporal resolution. An innovative approach called SM2RAIN that estimates rainfall from soil moisture data has been applied successfully to various regions. In this study, first, soil moisture content derived from the Advanced Microwave Scanning Radiometer for the Earth observing system (AMSR-E) is used as input into the SM2RAIN algorithm to estimate daily rainfall (SM2R-AMSRE) at different sites in the Karkheh river basin (KRB), southwest Iran. Second, the SWAT (Soil and Water Assessment Tool) hydrological model was applied to simulate runoff using both ground-based observed rainfall and SM2R-AMSRE rainfall as input. The results reveal that the SM2R-AMSRE rainfall data are, in most cases, in good agreement with ground-based rainfall, with correlations R ranging between 0.58 and 0.88, though there is some underestimation of the observed rainfall due to soil moisture saturation not accounted for in the SM2RAIN equation. The subsequent SWAT-simulated monthly runoff from SM2R-AMSRE rainfall data (SWAT-SM2R-AMSRE) reproduces the observations at the six gauging stations (with coefficient of determination, R2 > 0.71 and NSE > 0.56), though with slightly worse performances in terms of bias (Bias) and root-mean-square error (RMSE) and, again, some systematic flow underestimation compared to the SWAT model with ground-based rainfall input. Additionally, rainfall estimates of two satellite products of the Tropical Rainfall Measuring Mission (TRMM), 3B42 and 3B42RT, are used in the calibrated SWAT- model after bias correction. The monthly runoff predictions obtained with 3B42- rainfall have 0.42 < R2 < 0.72 and−0.06 < NSE < 0.74 which are slightly better than those obtained with 3B42RT- rainfall, but not as good as the SWAT-SM2R-AMSRE. Therefore, despite the aforementioned limitations, using SM2R-AMSRE rainfall data in a hydrological model like SWAT appears to be a viable approach in basins with limited ground-based rainfall data. View Full-Text
Keywords: AMSR-E soil moisture product; SM2RAIN; SWAT hydrological model; Karkheh river basin; Iran AMSR-E soil moisture product; SM2RAIN; SWAT hydrological model; Karkheh river basin; Iran
►▼ Show Figures 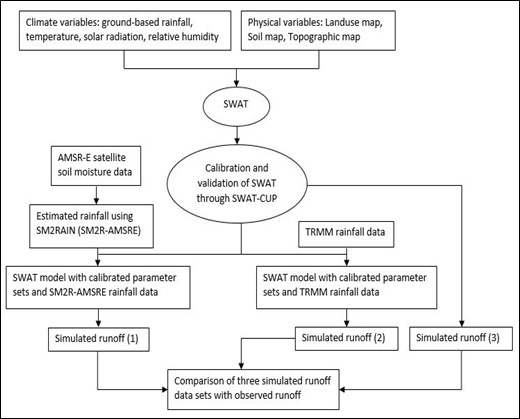