Documenting a Century of Coastline Change along Central California and Associated Challenges: From the Qualitative to the Quantitative
Previous Article in Special Issue

Some techniques, such as the Katerji and Perrier approach, estimate the bulk canopy resistance (rc) as a function of meteorological variables and then calculate the hourly evapotranspiration using the Penman–Monteith equation, so that traditional crop coefficients are not needed. As far as we know, there are no published studies regarding using this method for a maize crop. The objective of this study was to calibrate and validate the canopy resistance for an irrigated continuous maize crop in the Midwestern United States (US). In addition, we determined the effect of derivation year, bowen ratio, and the extent of canopy. In this study we derive empirical coefficients necessary to estimate rc for maize, five years (2001–2005) were considered. A split-sample approach was taken, in which each year’s data was taken as a potential calibration data set and validation was accomplished while using the other four years of data. We grouped the data by green leaf area index (GLAI) and the Bowen ratio (β) by parsing the data into a 3 × 3 grouping: LAI (≥2, ≥3, and ≥4) and |β| (≤0.1, ≤0.2, and ≤0.3). The best fit data indicated reasonably good results for all nine groupings, so that the calibration coefficients derived for the conditions LAI ≥ 2 and |β| ≤ 0.3 were taken in light of the longer span associated with LAI ≥ 2 and the larger number of hours. For the calibrations in this subgroup, the results indicate that the annual empirical coefficients for rc are nearly the same and equally effective, regardless of the year used for calibration. Our validation included all the daytime hours regardless of β. Thus, it was concluded that the calibration at our site was independent of the derivation year. Knowledge of the Bowen ratio was useful in calibration, but accurate ET estimates (validation) can be obtained without knowledge of the Bowen ratio. Validation resulted in hourly ET estimates for irrigated maize that explained 83% to 86% of the variation in measured ET with an accuracy of ± 0.2 mm. View Full-Text
Keywords: evapotranspiration; bulk canopy resistance; eddy covariance; Ithaca; NE evapotranspiration; bulk canopy resistance; eddy covariance; Ithaca; NE
►▼ Show Figures 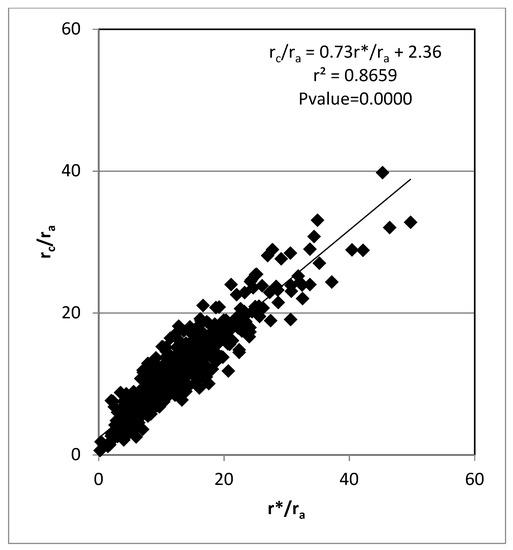