Modelling of Erosion and Transport Processes
Previous Article in Journal

The Role of Debris Cover in Catchment Runoff: A Case Study of the Hailuogou Catchment, South-Eastern Tibetan Plateau

Intratidal Variability of Water Quality in the Damariscotta River, Maine

The Damariscotta River Estuary in midcoast Maine, which houses over forty hectares of American oyster aquaculture, is characterized by several bathymetric sills, constrictions, and headlands. The geography, hydrology, and biochemistry of the estuary are closely intertwined, as its irregular shape contributes to spatially varying patterns of tidal flow, which are in turn responsible for sediment suspension. This project explores the spatial and temporal variability of the water level and current cycles of the estuary and how they are correlated to measures of water quality, such as turbidity, salinity, pH, and oxygen concentration. From July to November 2016, absolute pressure data from twelve sites were collected along the river, from which a tidal elevation time series was computed. In addition, velocity current profiles, water quality data, and wind data were obtained from surface buoys, and transects were collected in three major regions along the river. The lower and mid reaches of the estuary have a vertical shear structure of tidal flow, as high salinity water enters the estuary along the bottom during flood phase, is uplifted during the slack period, and flushed out at the surface during ebb phase. In this region, overtides are relatively weak compared to upstream, dissipation near the bottom is minimal, and turbidity and chlorophyll oscillate out of phase. North of the Glidden Ledges constriction, a headland causes the shear structure to become lateral, where dissipation is elevated during the flood phase throughout the entire water column. Dissipation has a quarter-diurnal harmonic due to increased turbulence during peak ebb and peak flood, which results in disproportionately high intratidal amplitudes in turbidity and chlorophyll. Overall, the bathymetry and tidal patterns of the estuary help to explain why the upper reaches tend to be more viable for shellfish aquaculture. View Full-Text
Keywords: estuaries; aquaculture; constrictions; overtides estuaries; aquaculture; constrictions; overtides
►▼ Show Figures 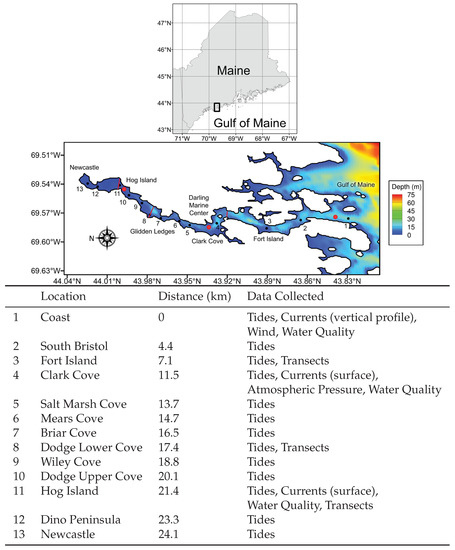