Infiltration is the process of water entering soil from the soil surface [1,2]. This process is one of the most important components in the hydrological cycle and is related to many environmental problems and soil erosion [3]. It is influenced by many internal and external factors, such as rainfall characteristics, slope gradients, soil hydraulic properties, soil properties, and surface sealing, which makes infiltration hard to quantify [4].
Numerous models have been proposed for vertically homogeneous soils with constant initial soil water content and flow over horizontal surfaces for infiltration estimations [5,6], including physically-based models and empirical models [7,8,9,10,11,12,13,14]. However, these models have limited applicability under complex initial factors. Many studies have been conducted to modify the applications of these models under various scenarios and assumptions. The Green–Ampt model is one of the most widely used hydrological and erosion models, as it involves simple expression, uses few parameters, and has a specific physical meaning. The model was initially developed to simulate infiltration under ponding conditions in homogeneous soil [15]. Modifications have continuously been proposed to expand the scope of the model’s application so that infiltration can be simulated under steady rainfall events [16], layered soil [17], or unsaturated soil with different slopes [18,19,20], as well as other conditions. The aforementioned models should be modified and improved based on a variety of scenarios to obtain the most accurate infiltration estimations.
Black soil, classified as a Haplic-Ustic sohumosol in the Chinese Soil Taxonomy and Udic Argiboroll in the U.S. Soil Taxonomy [21], is mainly distributed in Northeastern China. As this soil is rich in organic matter (OM) and appears black, it is referred to as “black soil” and the “black soil region” by local people and researchers alike [22]. The parent material of the soil contains mostly loess clay loam deposits. Due to the fine soil texture, black soil is poor in terms of permeability and is easily eroded. Coupled with the effect of seasonal variation in the region, i.e., freeze–thaw erosion in the winter and spring and rainstorm erosion in the flood season, black soil is impacted by severe runoff erosion. Erosion diminishes the OM content and soil thickness, and even induces decreasing soil productivity and environmental deterioration. It is essential to study black soil infiltration processes to prevent soil erosion.
Leaving field residues on the top of soil is a practical conservation tillage in the black soil region since there is a large annual production of crop residues. It was demonstrated that residue cover had a positive effect on soil infiltration, which increased infiltration into the soil and reduced surface runoff [19]. Although, researchers have paid much attention to the benefits of residue cover in terms of preserving soil and water and maintaining soil productivity, they have so far neglected infiltration estimation under residue cover [22,23]. Moreover, infiltration models have been mostly used for bare soils without the effects of residue cover. It is therefore necessary to modify the existing infiltration models to take into account the effects of residue cover for infiltration estimations of black soil on farmland.
In this study, the infiltration process of black soil under various rainfall intensities and residue coverages was studied with simulated rainfall. The objectives of the paper are:

Rainfall simulation experiments were conducted to study infiltration using spray-nozzle rainfall simulators and soil flumes in the rainfall simulation laboratory of Beijing Normal University, China, in 2015 (Figure 1). Four levels of rainfall intensities (including 30, 60, 90, and 120 mm/h), two soil moistures (8% and 30%, measured by TDR soil moisture sensor (Time domain reflectometry, CAMPBELL TDR200, Campbell Scientific, Inc., U.S.), representing the extremely dry and extremely wet runs), and 7% slope (defined as “intense erosion”, according to the grade scale of soil erosion intensity standard in the experimental field) were designed for the laboratory experiments. Five residue coverages (15%, 35%, 55%, 75%, and bare slope as a control), determined by the digital photograph method, were designed to quantify the residue cover effect. Corn stalks were collected to use in the experiments. Each rainfall event was performed in both dry and wet runs and lasted for 1 h under various rainfall intensities. The interval was 24 h between runs. In total, 80 runs were conducted. All treatments were performed twice for reproducibility and precision.
The experimental black soil used was the top 20 cm of surface soil from farmland and classified by light erosion intensity, collected from the Jiusan Soil Conservation Station. The characteristics of the black soil included an organic matter content of 5.0% and a particle size distribution of 32%, 33%, and 35% for sand, silt, and clay, respectively. The soil was filled into the flume with a depth of 0.25 m (2 m length × 1 m width × 0.35 m depth) and layered with a soil density of 1.07 to 1.25 g/cm3 to model actual field conditions. The upper soil layer was 0.1 m deep and the sublayer was 0.15 m deep, and the contact surface of the two layers was roughened to reduce soil stratification which could affect infiltration [24]. A wooden board was used for the soil surface flatting to reduce the effect of soil roughness.
The precipitation of each rainfall event was controlled by simulators. The runoff was collected into bottles for measurement every 5 min during rainfall, and volumes were recorded after the rain. The infiltration amount was the difference between the rainfall amount and the runoff; evaporation and residue retention during the rainfall events were not measured. The infiltration data obtained were used to determine the hydrological parameters in the models.

Nonlinear regression was used to determine the values of the parameters in the infiltration models with the rainfall data under the bare soil. The observed values beneath the residue cover and the corresponding predicted values were compared to evaluate the simulations of the models using the 1:1 line method. This method pertains to the t-test method to estimate whether the confidence interval of the slope and intercept of the regressed equation included the numbers 1 and 0, respectively [25]. If included, no difference existed between the regressed curve and the 1:1 line.
The root mean square error (RMSE), the Nash–Sutcliffe efficiency (NSE), and the determination coefficient (R2) were used to evaluate the accuracy of the infiltration models [27,28]. The equations of the statistical indexes were as follows: where is the ith observed value, is the average observed value of all of the observed events, is the ith predicted value, and N is the total number of events. The higher the NSE values were, the better the model performed, as it represented the level of agreement between the observed and predicted values [29]. The values of the RMSE showed the opposite result, namely, the lower the RMSE values were, the better the model performed. The closer to 1 the determination coefficient R2 was, the higher the correlation was. The range of the values of R2 was 0–1, while the range of the values of NSE was (−∞)–1. In the present study, represented the observed values and represented the predicted values of the infiltration rates.

3.2. Estimation of the Infiltration Model Parameters

The infiltration rates under the various rainfall intensities on the bare soil were used to fit the four models. The values of each parameter were regressed; these are listed in Table 2. As shown, the S·M parameter in the GAML model was negative (equal to −0.572), which was an invalid value. Therefore, the other three models were used for the infiltration estimation of the black soil, but not the GAML model. The determination coefficient R2 was approximately 0.5, and the regression results passed the significance test at the p = 0.01 level.

3.4. Performance of the Models for the Residue-Covered Black Soil

According to Xin et al. [25], RCFi was used to fit the infiltration rates of the residue-covered black soil. The performances of the three models were evaluated and the results showed that the Kostiakov model performed poorly. As it did not pass the 1:1 line test for the confidence interval of the slope and intercept of the regressed equation, excluding the numbers 1 and 0, respectively. The Horton and Philip models performed well (Figure 5). As is generally accepted, the performance of the Kostiakov model was robust for many soils over short time periods [31]. In our study, the performance of this model was good for the bare black soil, but it did not perform well after adding the effects of the residue cover in the multiplication form (Equation (1)). The multiplication form underestimated the initial infiltration rate under the high residue coverage scenario, which was in accordance with Almeida et al. [32] who used the Kostiakov–Lewis model for estimation, with the results indicating that the Kostiakov–Lewis model underestimated the infiltration rates at the beginning of the rainfall event and overestimated the rates at the end of the rainfall.
The statistical indexes NSE and RMSE were used for the comparison and are shown in Table 3. The performance of the Philip model was better than the Horton model, as the lower the values of the RMSE and the closer the NSE values were to 1, the better the fitting results were. From the above, the Philip equation was optimal for the infiltration estimation of the black soil under the residue cover conditions. The equation was where is the infiltration rate under the residue cover (mm/min).

Four models were compared to evaluate the infiltration of black soil. The GAML model, derived from the Green-Ampt model, demonstrated that infiltration during a steady rainfall event could be simulated. However, the model was not suitable for infiltration estimations of the black soil because of the negative values observed from the hydrological parameters. It might be that the original form was usually applied to initially dry, uniform, coarse-textured soil, such as sands and sand-fraction media [33], whereas the main textural classes of the black soil are silt clay loam and clay loam, according to the USDA (U.S. Department of Agriculture) classification [34]. As with all fine-textured soils, the resistance of soil pores to water flow was higher than in the coarse-textured soils [35]. The permeability of the black soil was poor, which caused the inapplicability of the GAML model.
The infiltration estimations of the Horton and Philip models for the residue-covered black soil performed well, with the Philip model performing better regarding the comparison of the statistical indexes NSE and RMSE. It is worth noting that both models overestimated the initial infiltration rates, especially under high residue coverage.
The average infiltration rates under the four rainfall intensities were used for the model fitting to remove the effects of heavy rain, but only the residue cover was considered, which might have been the reason for the outliers. Considering the physical significance of the Philip model, this derived residue cover infiltration model was suggested for use in estimations of cumulative infiltration amounts.

We are thankful for the valuable comments of anonymous reviewers. 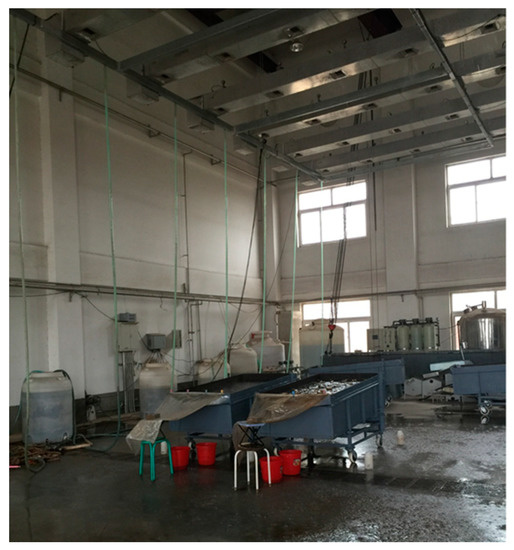 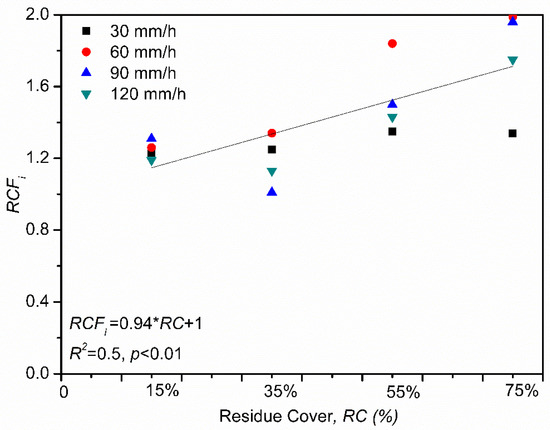 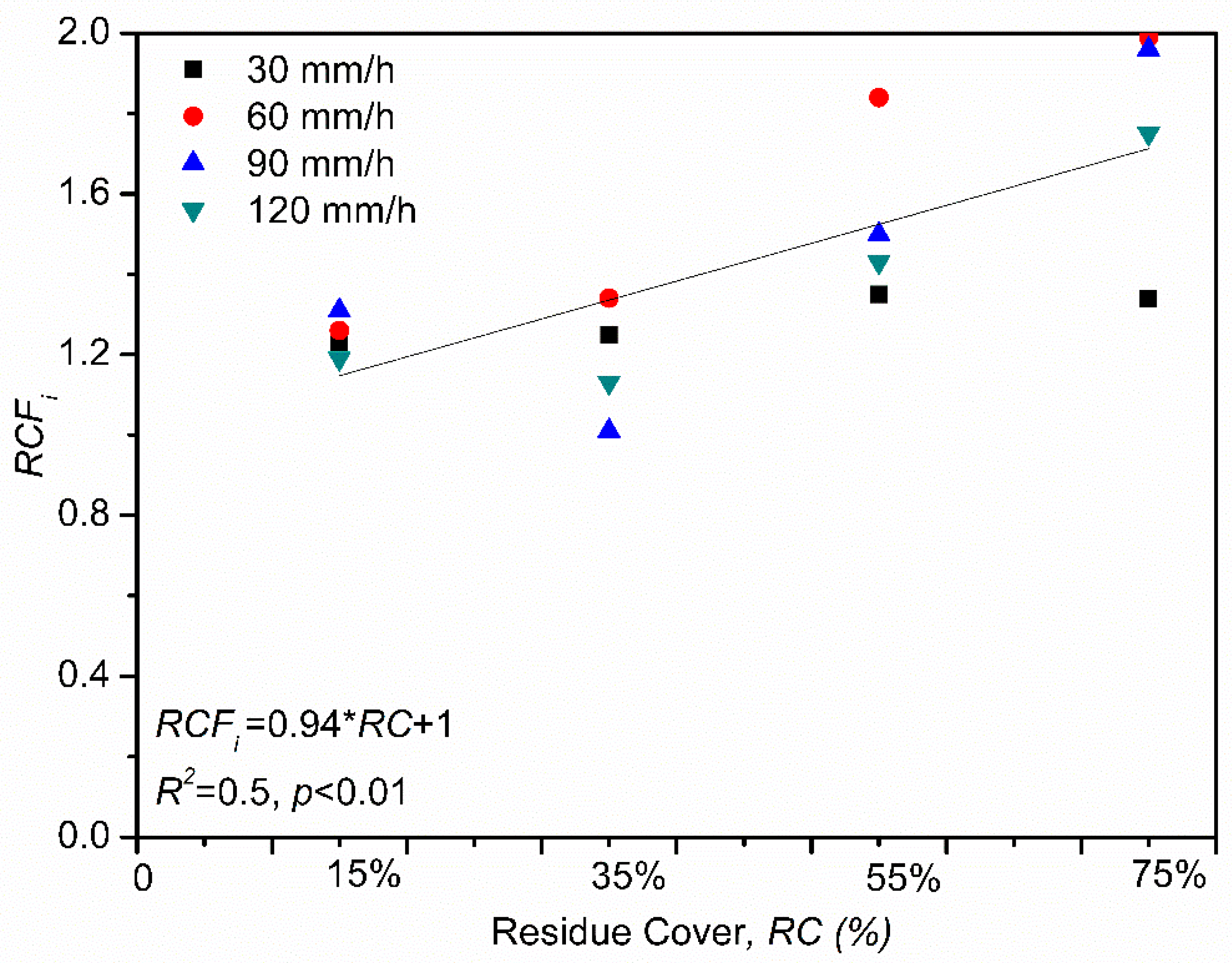 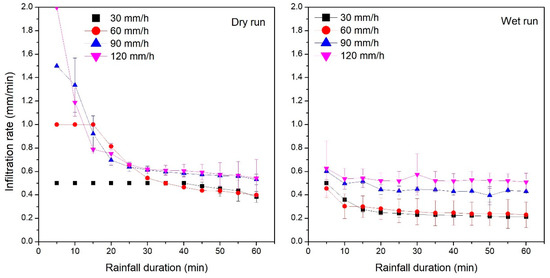 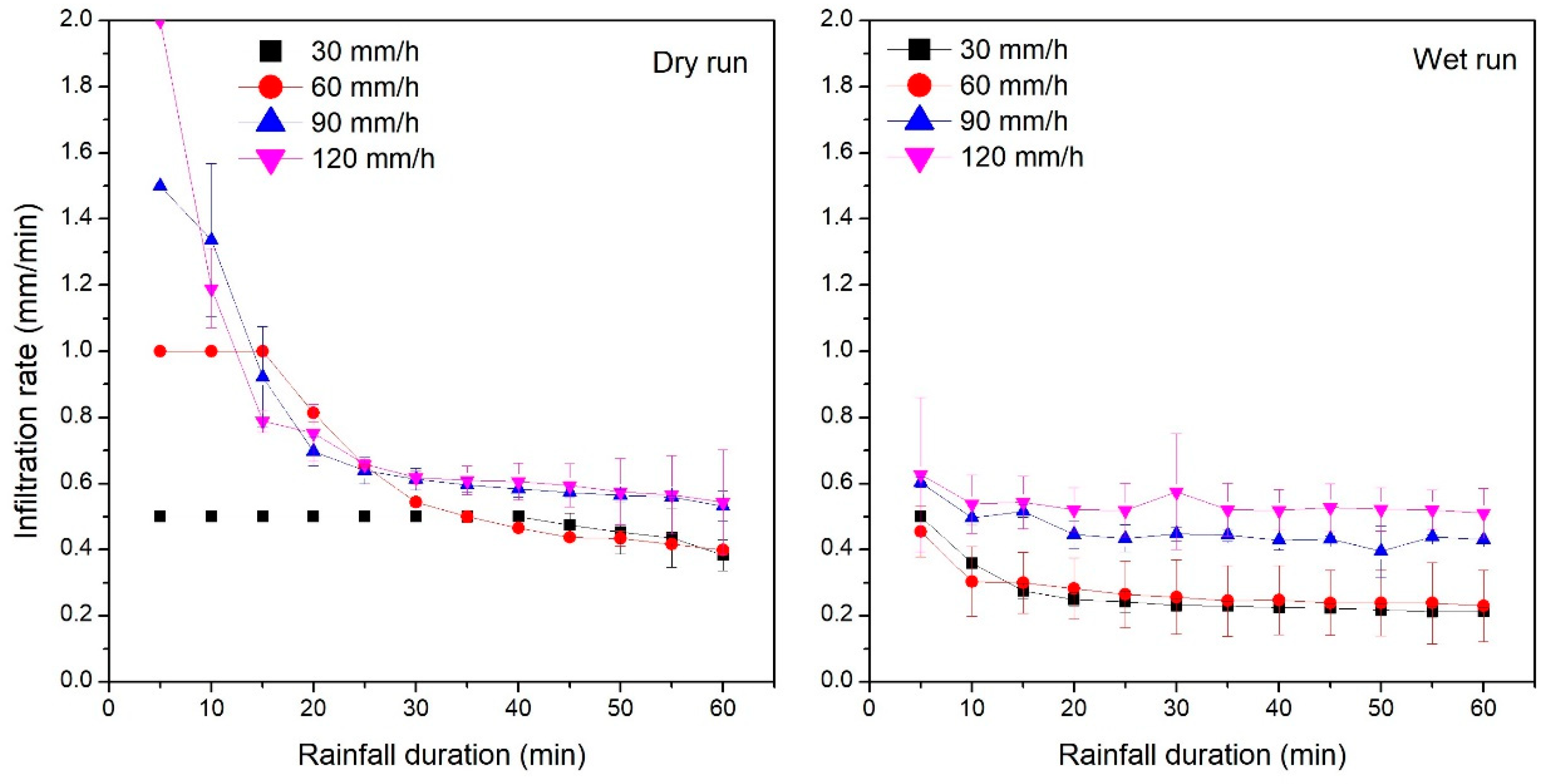 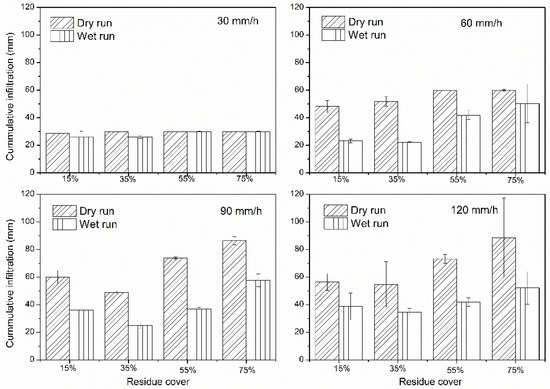 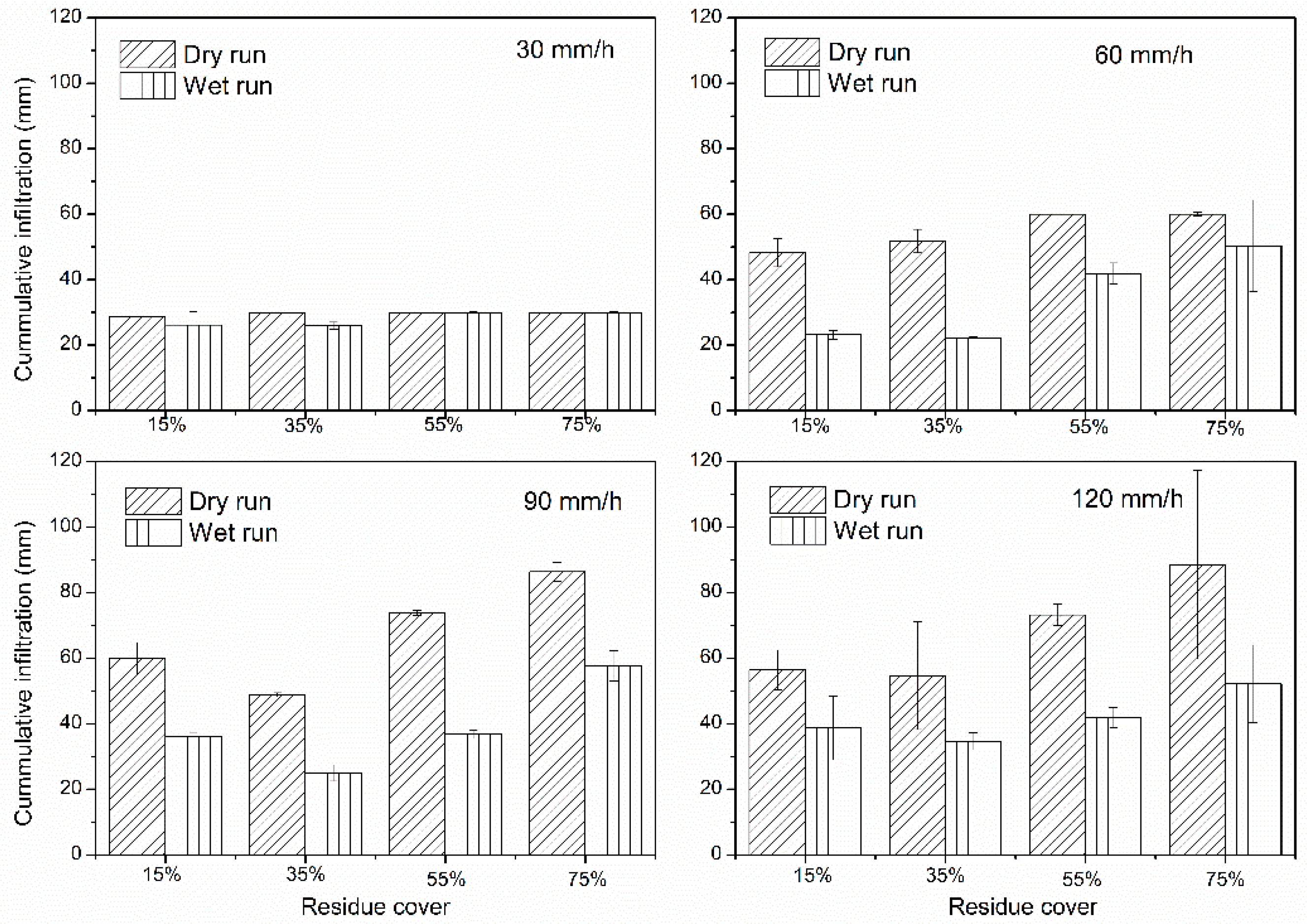 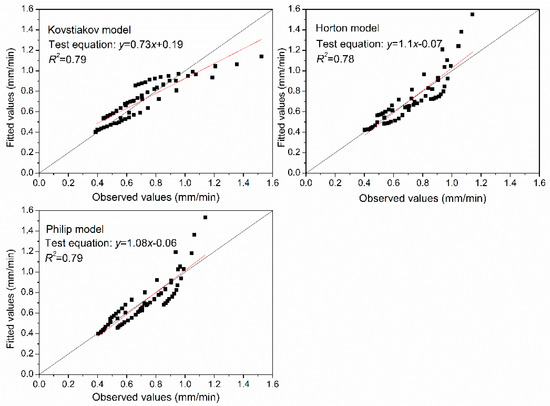