Planning in Democratizing River Basins: The Case for a Co-Productive Model of Decision Making

Several studies have demonstrated the continuum of cooperation on transboundary rivers, but have largely focused on government to government (Track 1) cooperation and formal diplomacy. Formal arrangements like treaties, agreements, joint mechanisms, joint bodies, joint commissions (e.g., river basin organizations), etc., fall within the scope of transboundary waters cooperation. However, in some transboundary rivers, often due to political constraints, Track 1 cooperation might not be a feasible option. When governmental cooperation is a non-starter, effort and progress made outside the government domain through informal dialogues can play a significant role. It is therefore important to re-examine the definition of cooperation as it applies to international rivers, and potentially to broaden its scope. Such an examination raises important questions: What does international cooperation in this context actually mean? Is it formal (Track 1) cooperation related to sharing of water, data, and information only, or does it have a broader meaning? What, precisely, can be the entry point for such cooperation? Are informal transboundary dialogues and water diplomacy itself an entry point for cooperation on international rivers? This paper aimed to answer these critical questions drawing from the “Brahmaputra Dialogue” project initiated in 2013 under the South Asia Water Initiative (SAWI), which involved the four riparian countries of the Brahmaputra Basin. Several important focal points of cooperation emerged through this sustained dialogue, which went beyond sharing hydrological data or signing a basin-level treaty, broadening the definition of “cooperation”. The paper, bringing evidence from the dialogue, argues that the Brahmaputra Dialogue process has led to a broader understanding of cooperation among basin stakeholders, which could influence water resource management of the basin in the future. View Full-Text
Keywords: transboundary waters; cooperation; integrated water resource management; Brahmaputra River Basin; South Asia transboundary waters; cooperation; integrated water resource management; Brahmaputra River Basin; South Asia
►▼ Show Figures 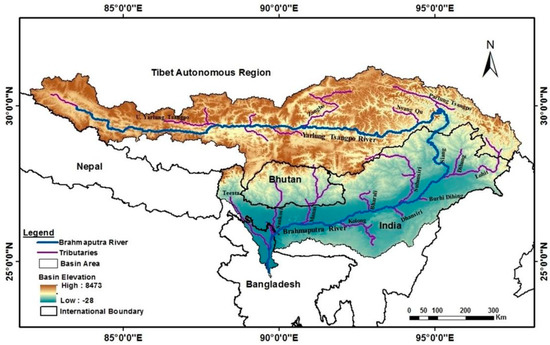