Are We Correctly Using Discharge Coefficients for Side Weirs? Insights from a Numerical Investigation

The wastewater final effluent samples were collected from Li Cun He municipal wastewater treatment plant in Qingdao, Shandong Province, during each season (23 April 2017; 17 August 2017; 24 October 2016; 25 January 2017). The treatment process included an A2O reactor followed by a microfiltration (MF) system, while filtration fabric and chlorine disinfection were used as the disinfection method. This sewage treatment plant treats 1.7 × 105 m3 wastewater every day, on average 70% of which is industrial sewage, and the rest is domestic sewage each year. Samples were taken from the wastewater final effluent after fabric filtration and chlorine disinfection. The wastewater final effluent is discharged into Li Cun He through a ditch with a dimension of 1 meter wide, 0.5 meters deep. Two L wastewater samples were collected from the top 10 cm of the profile (to minimize the impact of disturbances from the biofilm on the ditch wall) and thoroughly mixed immediately. The samples were taken by using sterile sampling bags, were kept at 4 °C, and then sent back to the laboratory immediately for subsequent analyses. The environmental factors were detected during sampling. Biochemical oxygen demand (BOD), chemical oxygen demand (COD), suspended solid (SS), total nitrogen (TN), and total phosphorus (TP) were determined using the titration method described in Standard Methods (APHA, 1995). The values are listed and shown in Table 1.

The 16S rRNA universal bacterial primers 28F (5′-GAGTTTGATCNTGGCTC AG-3′) and 519R (5′-GTNTTACNGCGGCKGCTG-3′) were used to amplify approximately 500 bp of the variable regions V1 to V3. The PCR products were purified by the MiniBest DNA Fragment Purification Kit Ver.4.0 (TaKaRa, Japan). Purified PCR products were mixed and sent to Shanghai Personal Biotechnology Co., Ltd. for pyrosequencing. Pyrosequencing of the PCR products was performed on a GS FLX sequencing instrument using the manufacturer’s suggested methods and reagents. Initial image collection was performed on the GS FLX instrument, in addition to subsequent signal processing, quality filtering, and generation of nucleotide sequences. All filtered sequences were compared with the Silva database [15] by the local BLASTN tool, and the output sequences were then assigned to NCBI taxonomies with MEGAN [16] to profile the bacterial communities. Sequences identified as archaea and eukaryon were filtered out. The 16S rRNA gene database [17] was downloaded from a homepage of the University of Hong Kong (http://web.hku.hk/~zhangt/ZhangT.htm).

Between 24 October 2016 and 17 August 2017, we collected four samples of wastewater final effluents from Li Cun He municipal wastewater treatment plant in Qingdao, Shandong Province. These four samples represent the wastewater final effluents in different seasons. We obtained a total of 57,116 DNA sequences, with an average of 14,279 sequences per sample. Of those sequences, 43,139 sequences were high-quality sequences, and those high-quality sequences were selected using PANGEA and subsequently pooled. Operational taxonomic units (OTUs) were determined at the genus (95%) level. Analysis by weighted Fast UniFrac was used to compare the bacterial communities across different effluent samples (Hamady et al., 2010). In this study, there were 1800 ± 200 OTUs per sample.
To compare the genotypic diversity, the community richness (Chao and Ace indexes) and community diversity (Shannon index) were calculated (Table 2). A greater Chao/ACE index indicates higher community richness, while higher Shannon index indicates higher community diversity. Table 2 shows that the wastewater final effluents sampled in summer and autumn had significantly higher bacterial diversity than the wastewater final effluents sampled in spring and winter, and the samples in autumn displayed the highest diversity, while the lowest bacterial diversity was found in samples collected in winter.

3.2. Identification of the Bacterial Community in the Wastewater Final Effluents

3.3. Seasonal Variability in the Dominant Species in Wastewater Final Effluents

3.4. Functional Profiling of Bacteria in the Wastewater Final Effluents

According to the relative abundances of the OTUs, functional profiling of microbial communities were predicted using 16S rRNA marker gene sequences [21], and the results are shown in Figure 2. These functional genes presented stable distributions with slight seasonal variations. They were mainly related to cellular processes, environmental information processing, genetic information processing, human diseases, metabolism, and organismal systems. Of these, the genes related to metabolism were the most dominant, with relative abundances of more or less than 50% in each season. In addition, genes related to human diseases had relative abundances of approximately 1% in each season, and the main diseases related to the annotated genes were infectious diseases, neurodegenerative diseases, cancers, metabolic diseases, immune system diseases, and cardiovascular diseases.

The authors would like to thank Song-Qing Duan and Qi-Chen Liu for their assistance in the laboratory experiment. 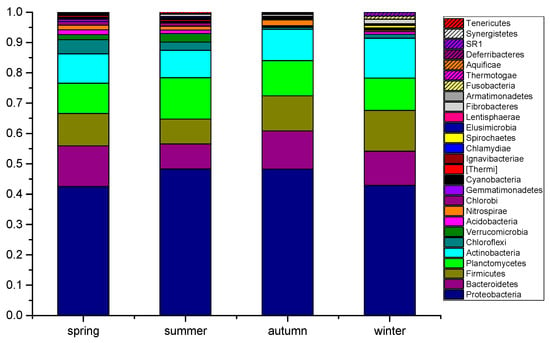 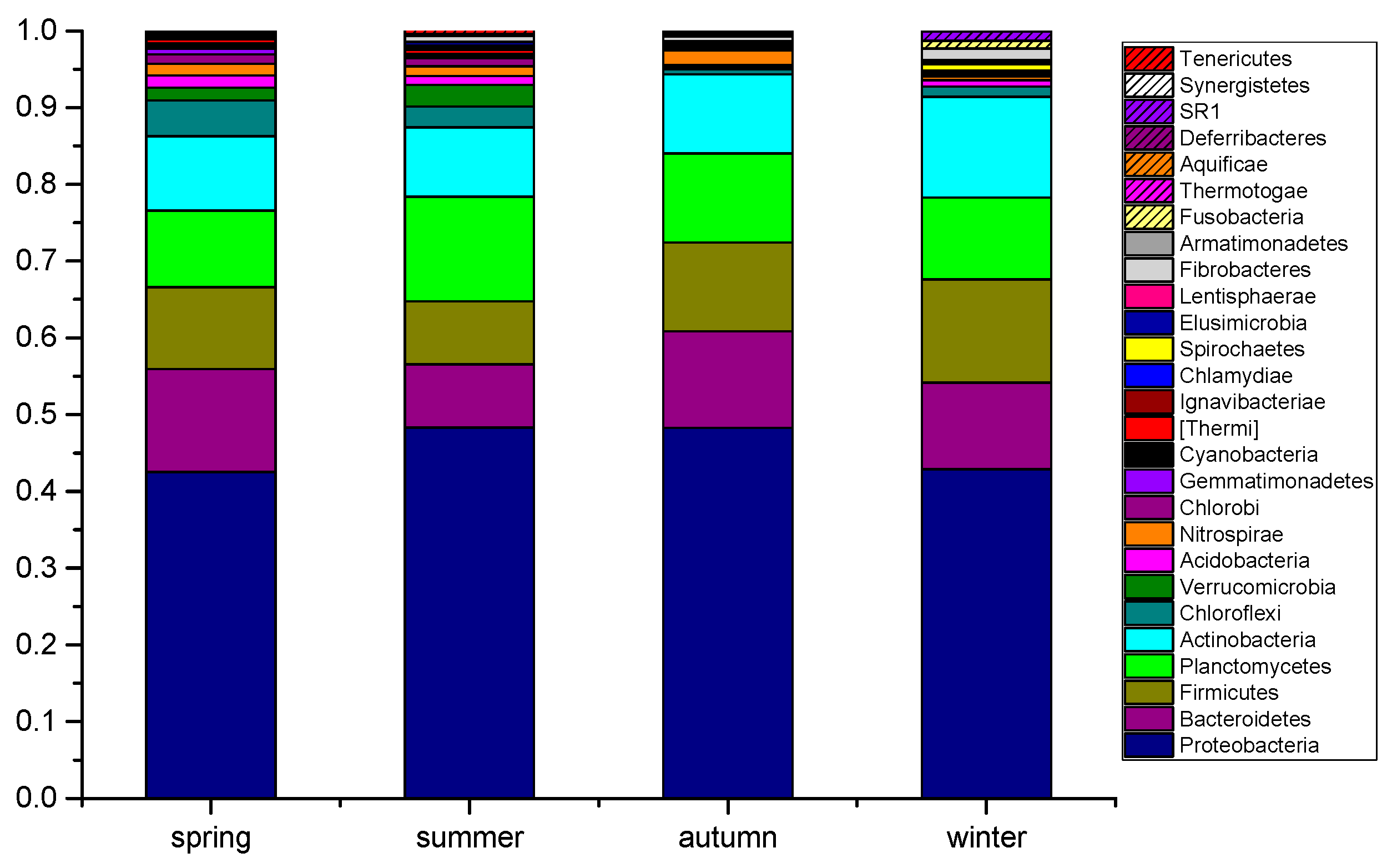