Groundwater communities residing in contaminated aquifers have been investigated mainly through taxonomy-based approaches (i.e., analyzing taxonomic richness and abundances) while ecological traits have been rarely considered. The aim of this study was to assess whether a trait analysis adds value to the traditional taxonomy-based biomonitoring in N-contaminated aquifers. To this end, we monitored 40 bores in the Vomano alluvial aquifer (VO_GWB, Italy) for two years. The aquifer is a nitrate vulnerable zone according to the Water Framework Directive. The traditional taxonomy-based approach revealed an unexpectedly high biodiversity (38 taxa and 5725 individuals), dominated by crustaceans, comparable to that of other unpolluted alluvial aquifers worldwide. This result is in contrast with previous studies and calls into question the sensitivity of stygobiotic species to N-compounds. The trait analysis provided an added value to the study, unveiling signs of impairments of the groundwater community such as low juveniles-to-adults and males-to-females ratios and a crossover of biomasses and abundances curves suggestive of an intermediate alteration of the copepod assemblages. View Full-Text
Keywords: crustaceans; copepods; stygobiotic; traits; groundwater; nitrate; ammonium; nitrite; nitrogen; contamination crustaceans; copepods; stygobiotic; traits; groundwater; nitrate; ammonium; nitrite; nitrogen; contamination
►▼ Show Figures 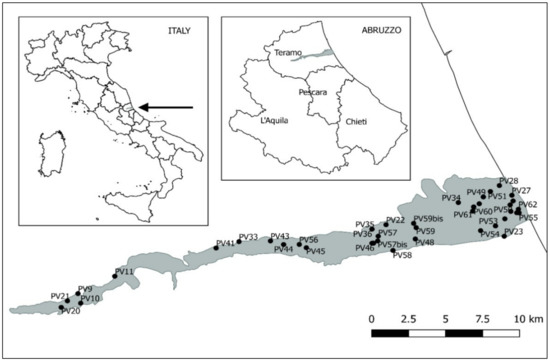 
Di Lorenzo T, Murolo A, Fiasca B, Tabilio Di Camillo A, Di Cicco M, Galassi DMP. Potential of A Trait-Based Approach in the Characterization of An N-Contaminated Alluvial Aquifer. Water. 2019; 11(12):2553.