Removal of Organic Micropollutants in Wastewater Treated by Activated Sludge and Constructed Wetlands: A Comparative Study

The aim of this study is to compare the removal of organic micropollutants (OMPs) in wastewater by activated sludge (AS) and constructed wetlands (CWs). This analysis was carried out in a wastewater treatment plant (WWTP) of a rural community where they implemented two technologies in parallel: AS and a pilot plant of horizontal subsurface flow (HSSF) constructed wetlands. In this case, these systems were fed by the same influent and the removal efficiencies of 14 OMPs, including analgesics/anti-inflammatories, anticonvulsants, stimulants, antifungals, fragrances, plasticizers, and transformation products, were evaluated in each system. Regarding the presence of OMPs in the wastewater, the concentrations of these compounds in the influent ranged from 0.16 to 7.75 µg/L. In general, the removal efficiencies achieved by the AS system were between 10%–95% higher than those values reported by HSSFs with values above 80% for naproxen, ibuprofen, diclofenac, caffeine, triclosan, methyl dihydrojasmonate, bisphenol-A, 2-hydroxyl ibuprofen, and carboxy ibuprofen (p < 0.05). This behavior can be related to the aerobic conditions that promote the AS system with oxidation-reduction potential (ORP) and dissolved oxygen (DO) values above −281 mV and 0.24 mg/L, respectively. However, the removal of galaxolide was greater in HSSF system than in AS with significant difference of 70% (p < 0.05). Despite these results, this study reveals that comparing both technologies, AS had the best removal performance of these OMPs studied. View Full-Text
Keywords: organic micropollutants; activated sludge; horizontal subsurface flow constructed wetlands organic micropollutants; activated sludge; horizontal subsurface flow constructed wetlands
►▼ Show Figures 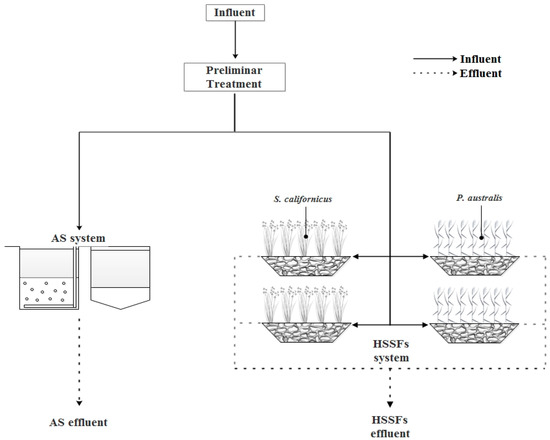