Article
The Origin of Major Ions of Groundwater in a Loess Aquifer
by Tianming Huang 1,2,*

:
When groundwater represents most of the world’s reserves of unfrozen freshwaters, water quality is commonly a limiting factor in quantifying usable fresh groundwater storage, especially in arid and semi-arid areas. Tracing the origin of major ions is important to the understanding of hydrochemical evolution and water–rock interaction. Strontium (Sr) and calcium (Ca) are geochemically similar in terms of ionic radius and ionic charge and can substitute for each other in mineral lattices such as in carbonates and silicates. This allows the use of Sr as a proxy for Ca during water–rock interaction. Geochemical mass balance and carbon and strontium isotope techniques were employed to study the origin of each major ion (such as Na, Ca, Mg, Cl, and SO4) in a loess aquifer (there is 10% to 20% of carbonate in the loess). Geochemical mass balance between atmospheric deposition and groundwater shows that the Cl (average concentration of 5.5 mg/L) and SO4 (average concentration of 6.8 mg/L) in groundwater originated from atmospheric deposition. The dissolution of loess using acetic acid was used to analyze the 87Sr/86Sr ratio of carbonate (mainly deposited in continental environments). Groundwater 87Sr/86Sr ratios (0.710677 to 0.712319) are consistent with 87Sr/86Sr ratios in carbonate (0.710329 to 0.711085) but are significantly lower than the whole-rock (0.715136 to 0.717155) and residue (0.719091 to 0.720438), suggesting that Ca and Mg mainly originated from the dissolution of carbonate in the loess aquifer. However, Na originated from the dissolution of albite, suggesting saturation controls the ability of dissolution. There are cation exchanges between Ca + Mg and Na, resulting in Na concentration increases and Ca + Mg concentration decreases in groundwater. This study is important to the understand of the origin of the major ions in groundwater and the geochemical processes in silicate-carbonate aquifers.
Keywords:
groundwater; strontium; isotopes; geochemical methods; acetic acid; 87Sr/86Sr

Groundwater represents about 96% of the world’s reserves of unfrozen freshwaters [1]. Groundwater is of fundamental significance for human development to meet the rapidly expanding urban, industrial, and agricultural water requirements, especially in arid and semi-arid areas [2], and more than two billion people in the world depend on groundwater for their daily supply [3]. Meanwhile, water quality is a limiting factor for usable fresh groundwater utilization [4,5]. Poor water quality can be caused by a natural condition (such as strong aridity or many soluble salts in an aquifer) and by human activities (such as fertilizer utilization and drainage of waste waters). The impact of human activities on water quality were only recognized in the past half-century before which time, pristine conditions reflecting natural processes controlled the hydrochemistry [6]. The impact of diffuse pollution from intensive agriculture, waste disposal, and point source pollution from urban and industrial sources, relied on geochemistry to solve questions of origin and attenuation. In semi-arid regions facing water scarcity, geochemical approaches have been vital in the assessment of renewability [6,7] and characterizing water–rock interaction.
The Cl, SO4, HCO3/CO3, Na, K, Ca, and Mg are the major ions in groundwaters [4,8], which reflect the geochemical evolution and water–rock interaction. Their sources vary from different sites and become more complex when they are affected by human intervention. Strontium (Sr) and calcium (Ca) are geochemically similar in terms of ionic radius and ionic charge and can substitute for each other in mineral lattices such as in carbonates and some silicates [9]. Therefore, Sr has been used as a proxy for Ca in many studies [10,11,12]. In most cases, carbonate rocks have higher contents of strontium but lower 87Sr/86Sr as compared to strontium derived from silicate rocks with lower contents of strontium and higher 87Sr/86Sr [12,13]. Marine carbonate commonly has a 87Sr/86Sr value that is less than 0.709 [12]. The difference in 87Sr/86Sr makes it possible to identify the water–rock interaction from carbonate or silicate. For example, based on the 87Sr/86Sr, the chemical composition of the Wujiang River (Guizhou Province, SW China) waters are characterized mainly by limestone weathering, while those of the adjacent Qingshuijiang River waters are characterized mainly by dolomite and silicate weathering [14]. The pore waters extracted from the matrix from the Cretaceous Chalk of southern England were intermediate between the calcite matrix (acetic acid soluble, low 87Sr/86Sr ratios) and clay component (high 87Sr/86Sr ratios), suggesting groundwater is strongly influenced by the weathering or exchange with clays [15].
Most studies over the world have focused on carbonates deposited in marine environments in aquifers and the 87Sr/86Sr ratios for the marine carbonates have been well constructed [12,15]. However, for carbonates deposited in continental environments, the 87Sr/86Sr ratios [16,17,18] and δ13C values vary largely [19,20,21] because of changes in deposition environments. This study aims to determine the origin of the major ions in the Xifeng loess aquifer, in NW China, mainly using major ion chemistry and C isotopes along with Sr isotopes to study the natural geochemical processes for groundwater. The calcites in the loess were deposited in continental environments (i.e., loessification) [22,23]. The aquifer was chosen for several reasons which include: (1) there are typically 10% to 20% carbonate in loess [22,24], presenting a relatively complex matrix of aquifer; (2) the hydrogeological condition is relatively simple and the groundwater cycle has been well recognized [21,25]; and (3) groundwaters are all old water [21], presenting a natural groundwater quality level with little human interference. The chemical (temperature, EC, pH, TDS, Cl, SO4, NO3, HCO3, F, Br, Na, K, Ca, and Mg) and isotopic composition (δ2H-H2O, δ18O-H2O, δ15N-NO3, δ18O-NO3, δ13C-DIC, 3H, and 14C-DIC) of groundwater and isotopic composition (δ13C and δ18O) of carbonate of loess have been reported in our previous study [21]. In this study, we further analyzed Sr concentration and 87Sr/86Sr in groundwater samples, and 87Sr/86Sr in loess as whole-rock and conducted dissolution experiment using acetic acid to determine the 87Sr/86Sr ratios of carbonate in loess.

The Xifeng loess tableland is located in the central part of the Loess Plateau of China (LPC) and is the largest tableland in the LPC with a loess depth of 150 to 200 m [25]. The horizontal Cretaceous mudstone (K1lh) is covered by Quaternary loess (Figure 1) composed of lower Pleistocene (Q1), middle Pleistocene (Q2), and upper Pleistocene (Q3) deposits. The Q1 Loess, with a thickness of 40 to 50 m, commonly crops out at the bottom of the upper and middle reaches of gullies. The hard and compacted Q1 Loess has low permeability and is usually considered as an aquitard [25]. The Q2 Loess has a thickness of 120 to 170 m and commonly crops out on the sides of valleys and at the heads and cliffs of gullies. The Q2 Loess is unconsolidated and has relatively large porosity and is considered to be a good aquifer. The Q3 Loess has a thickness of 10 to 15 m and is distributed above the Q2 Loess as the topsoil in the area (Figure 1).
The depth of the water table is in the range of 40–75 m with an increasing trend from the center of the plain to its surrounding areas. The discharge of groundwater is mainly in the form of suspension gravity springs in gullies (Figure 1). The average annual precipitation is 546 mm/year, approximately 68% of which falls between June and September during the Asian monsoon. The average annual temperature is 9.2 °C according to data reported from 1956 to 2010. The main crops are winter wheat and maize, with one crop each per year.
According to our recent study [21], diffuse recharge through the thick unsaturated zone is the only recharge source to the aquifer. The recent infiltrated recharging water, since the 1950s, is still retained in the upper 10 m of the unsaturated zone with a recharge rate in the range of 37–41 mm/year. Therefore, the groundwater is all old water (tritium free) with the corrected 14C ages in the range of 220–19,220 years.
Twenty-six shallow groundwater samples, with well depths in the range of 55–180 m, were sampled in 2018 (Figure 1). Meanwhile, loess samples were collected from two deep profiles (XZ1 with a depth of 55 m and XZ2 with a depth of 45 m) by using an engineering geological survey drill. There were no fluids added during drilling. The bulk samples of ~2000 g were collected, at 0.25 m intervals at 0 to 20 m and 0.50 m intervals below 20 m (280 samples in total). The samples were immediately sealed in polyethylene bags after collection.

Loess is a kind of aeolian deposit and has been deposited in succession since 2.4 Ma [22]. Under different deposition environments (such as temperature and precipitation), particle sizes and geochemical compositions for loess with different ages change but with limited variations [19,22]. The loess samples in this study contain a significant proportion of silt-sized particles (2 to 50 µm), accounting for 70% to 84%, and less clay (<2 µm and <12%) and sand (>50 µm and ~12%). Loess is composed of quartz, potassium feldspar, plagioclase, clay, and carbonate (calcite and dolomite) (Table 1). The illite-smectite, illite, kaolinite, and chlorite are the main components for clay (Table 2). The loess samples are enriched in carbonate ranging from 9.1% to 22.1% (Table 1). The CaCO3 in loess mainly originated from secondary deposit (accounting for 90%) that occurs during the loessification processes [17,22,23,24,28]. Secondary carbonates originate from the vertical, horizontal, or in situ resettlement of carbonates during pedogenesis in the soil-sedimentary environment [28]. Table 3 shows the element composition for the four loess samples.
The carbon isotopic composition (δ13C) for marine carbonate is 0.6‰ ± 1.6‰ [29] and it typically ranges from −10‰ to −2‰ for continental carbonate [20] with an average value of −4.9‰ ± 2.8‰ [29]. The δ13C values for carbonate in loess in the study area range from −8.3‰ to −3.3‰ (Table 4), showing the continental origin of the carbonate. The values are consistent with that in the Luochuan tableland ranging from −9‰ to −4‰ [23].
The strontium isotopic composition (87Sr/86Sr) for the whole loess ranges from 0.715136 to 0.717155 (Table 4). Because the whole loess includes silicate, evaporite (if there was), and carbonate minerals, the values are the mixed results for the two kinds of minerals.

4.3. Characteristics of Carbonate in Loess

The work is supported by the National Natural Science Foundation of China, grant numbers 41672254 and 41877207, and the Youth Innovation Promotion Association CAS, grant number 2018087.

The authors thank Zhenbin Li for his help in field sampling and Yiman Li for her help in conducting the experiment. The authors also wish to express their appreciation to the editor and three anonymous reviewers whose detailed comments were very helpful in improving the clarity and focus of the manuscript. 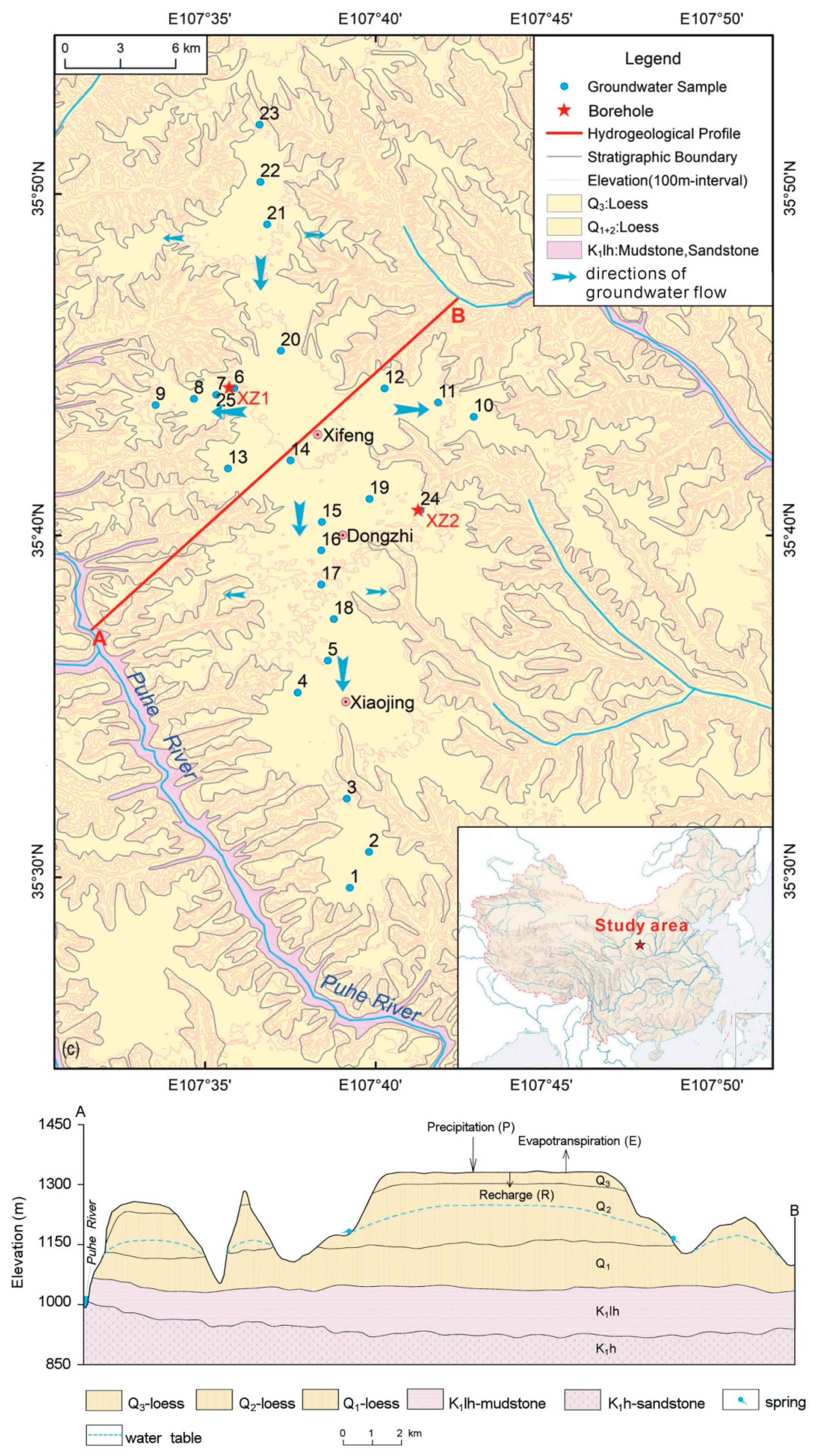 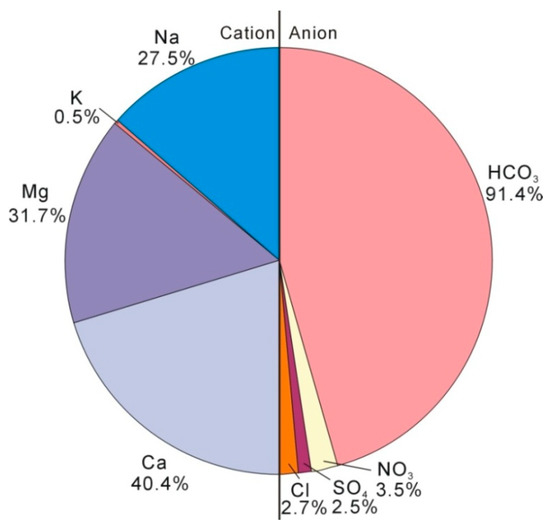 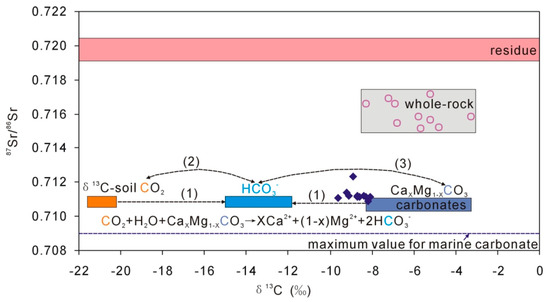