Solid phase extraction using magnetic nanoparticles has represented a leap forward in terms of the improvement of water quality, preventing the contamination of industrial effluents from discharge in a more efficient and affordable way. In the present work, superparamagnetic iron oxide nanoparticles (MNP) with different surface charges are tested as nanosorbents for the removal of chromium(VI) in aqueous solution. Uniform magnetic nanoparticles (~12 nm) were synthesized by a microwave polyol-mediated method, and tetraethyl orthosilicate (TEOS) and (3-aminopropyl) triethoxysilane (APTES) were grafted onto their surface, providing a variation in the surface charge. The adsorptive process of chromium was evaluated as a function of the pH, the initial concentration of chromium and contact time. Kinetic studies were best described by a pseudo-second order model in all cases. [email protected] barely removed the chromium from the media, while non-grafted particles and [email protected]@MNP followed the Langmuir model, with maximum adsorption capacities of 15 and 35 mgCr/g, respectively. The chromium adsorption capacities abruptly increased when the surface became positively charged as the species coexisting at the experimental pH are negatively charged. Furthermore, these particles have proven to be highly efficient in water remediation due their 100% reusability after more than six consecutive adsorption/desorption cycles. View Full-Text
Keywords: water treatment; iron oxide nanoparticles; magnetic nanoparticles; magnetic harvesting; adsorption; chromium removal water treatment; iron oxide nanoparticles; magnetic nanoparticles; magnetic harvesting; adsorption; chromium removal
►▼ Show Figures 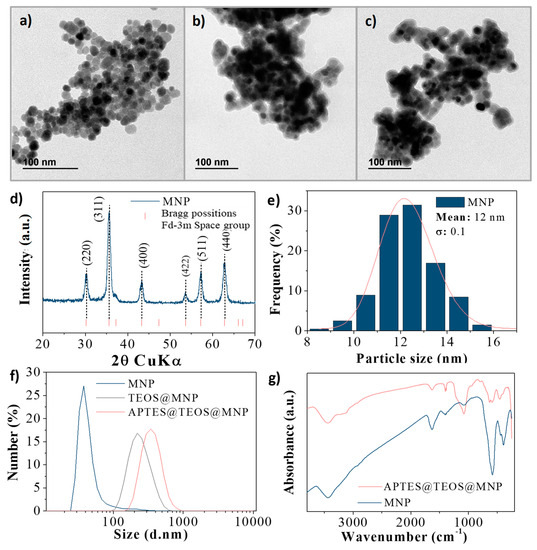