Comparing Meteorological Data Sets in the Evaluation of Climate Change Impact on Hydrological Indicators: A Case Study on a Mexican Basin
Next Article in Special Issue

Effect of Climate Change on Maize Yield in the Growing Season: A Case Study of the Songliao Plain Maize Belt
Previous Article in Special Issue

Carbon Transfer from Cyanobacteria to Pelagic and Benthic Consumers in a Subtropical Lake: Evidence from a 13C Labelling Experiment

Sudden increases in temperature and turbidity in aquatic ecosystems are expected for different regions in the future, as a result of the more frequent extreme climatic events that are predicted. The consequences of these abrupt changes in the outcomes of predator–prey interactions are unknown. Here, we tested the effects of a heat wave and a turbidity pulse on the foraging success of a subtropical cichlid fish (Gymnogeophagus terrapurpura) on amphipods (Hyalella curvispina). We carried out a short-term experiment combining treatments of turbidity (3 and 100 nephelometric turbidity units [NTU]) and water temperature (19.2, 22.2, 25.2 and 27.0 °C), considering potential differences given by fish length. Changes in water temperature did not promote significant changes in prey consumption. Higher turbidity, in contrast, decreased prey consumption. Also, we found that fish with different body lengths consumed a similar amount of prey under clear waters, but, in turbid waters, bigger individuals were more efficient than the smaller individuals. This finding is an empirical demonstration that the effect of increased turbidity on predation rate depends upon predator body size, and it suggests that bigger body sizes may help overcome turbidity-associated limitations in finding and capturing prey. Our short-term results suggest that, if turbidity pulses and heat waves become more frequent in the future, the outcome of fish–invertebrate interaction can be affected by local characteristics such as fish population size distribution. View Full-Text
Keywords: water transparency; warming; predation; predator–prey interaction water transparency; warming; predation; predator–prey interaction
►▼ Show Figures 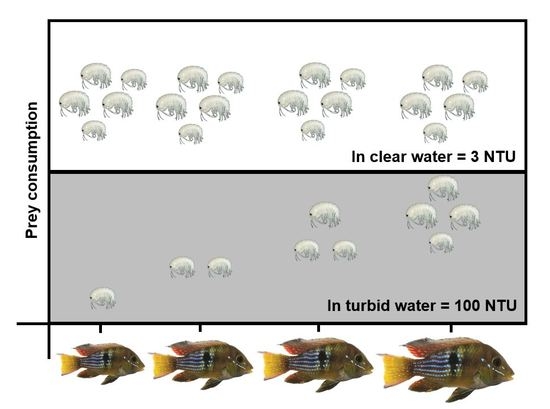