Effect of Climate Change on Maize Yield in the Growing Season: A Case Study of the Songliao Plain Maize Belt
Next Article in Special Issue

Soil organic carbon (SOC) is strongly influenced by climate change, and it is believed that increased temperatures might enhance the release of CO2 with higher emission into the atmosphere. Appropriate models may be used to predict the changes of SOC stock under projected future scenarios of climate change. In this investigation, the RothC model was run for a period of 36 years under climate scenarios namely: P (no climate change) as well as CCH1 and CCH2 (climate change scenarios) in the arid rangelands of Ghir–O-Karzin’s BandBast in southern Iran. Model results have shown that after 11 years (2014–25), SOC stock decreased by 3.05% under the CCH1 scenario (with a projected annual precipitation decrease by 6.69% and mean annual temperature increase by 9.96%) and by 0.23% under the P scenario. In CCH2, with further decreases in rainfall (10.93%) and increase in temperature (12.53%) compared to CCH1, the model predicted that the SOC stock during the 25 years (2025–50) was reduced by 2.36% and 3.53% under the CCH1 and CCH2 scenario respectively. According to model predictions, with future climatic conditions (higher temperatures and lower rainfall) the decomposition rate may increase resulting in higher losses of soil organic carbon from the soil matrix. The result from this investigation may also be used for developing management techniques to be practiced in the other arid rangelands of Iran with similar conditions. View Full-Text
Keywords: global warming; soil carbon model; rangelands of southern Iran global warming; soil carbon model; rangelands of southern Iran
►▼ Show Figures 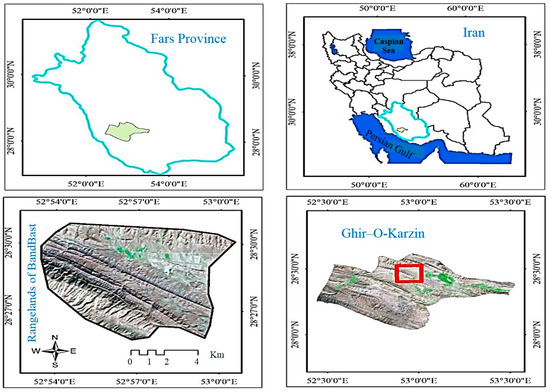