Application of a Fuzzy Two-Stage Chance Constrained Stochastic Programming Model for Optimization of the Ecological Services Value of the Interconnected River System Network Project in the Western Jilin Province, China

The operation of pump stations should be integrated considering the levels of monitoring nodes and urban streams within the target watershed. RTC in this study means the operation/control of urban drainage facilities considering real-time rainfall data per minute. This approach was applied to each drainage area. Monitoring nodes were selected using the method described by Lee et al. [16], and integrated operation was based on the level of urban streams. When the stream level is high, the freeboard of levees on one or both sides may not be enough to prevent flood risk. In this case, pump stations on the stream do not operate drainage pumps as early as expected; however, they reserve a certain amount of water as the operating level in the centralized reservoirs (CRs) of the pump station increases. The CR in urban drainage systems is located in the downstream of the network in a single drainage area. It receives all inflow from the network, and the inflow in the CR is discharged by drainage pumps in pump stations.
The objective of integrated operation in urban areas is to ensure rapid and safe drainage and to secure additional storage capacity. In addition, it can prevent the backwater effect that is caused by high water levels in the CR and reduce the risk of overflow in urban streams. Moreover, this operation system allows for the effective management of urban streams when the system does not have sufficient capacity. This study looks at the development of an integrated operation system considering sustainable urban management, which applies the revised system resilience index and focuses on Korean urban areas. In Korea, it is difficult to expand the width of streams or increase the height of levees because the tops of levees are used as roads. The integrated operation can balance the spare capacity between urban drainage facilities and urban streams. A schematic of the integrated operation is shown in Figure 1. The proposed approach consists of three schemes: (1) integrated pump operation, (2) the revised system resilience index, and (3) the selection of monitoring nodes.

This study consisted of five parts, as shown in Figure 5. First, synthetic rainfall data were generated for the selection of monitoring nodes. Second, monitoring nodes in each drainage area were selected to operate drainage pumps in the CR. Third, a monitoring node in an urban stream was selected for integrated operation in each CR. Fourth, the integrated operation of pump stations was conducted using the level of a monitoring node in an urban stream. Finally, a revised resilience index was suggested and applied to urban drainage systems in a target watershed.
A storm water management model (SWMM) was used for the rainfall runoff simulation of the target watershed [32]. Evaporation and losses can be simulated in the SWMM. In Korea, the evaporation data are generally provided per month and not per minute. Monthly averages in evaporation can be applied to the SWMM, which is only used during dry periods. For infiltration among losses, Horton’s infiltration equation was used. Each parameter was changed during calibration. Other losses were considered using the percentage of impervious area at each sub-catchment.

For each drainage area and urban stream, synthetic rainfall data were generated using the Huff distribution [49], and monitoring nodes were selected by means of a rainfall runoff simulation. The synthetic rainfall data were used for the selection of monitoring nodes, and the historical rainfall data were selected to verify the effect of the integrated operation. The Huff distribution was used because its third quartile is appropriate for the design and operation of drainage facilities in Korea [50]. The design of Korean urban drainage facilities is based on this distribution. Equation (4) shows the regression equation for the third quartile of the Huff distribution in Seoul [51]. where y is the ratio of cumulative rainfall, and x is the ratio of the total rainfall duration. The process of generating synthetic rainfall data from the Huff distribution consists of three steps. First, a cumulative distribution is generated using the regression equation of the Huff distribution. Second, the separated ratio is produced by the cumulative distribution. Third, the rainfall amount and duration are applied to the separated ratio [51]. This process is illustrated in Figure 9.
Moreover, the sewer network in the target watershed was manually calibrated using the 2010 and 2011 rainfall events. After the calibration of each sub-watershed in each CR, the total runoff was calibrated downstream of each drainage area. The peak discharge, peak time, total runoff volume, and minimization of the root mean square error were focused on the calibration of the model. The percentage of impervious area, width, and percentage of slope in each sub-catchment were used to calibrate the model. In addition, the maximum infiltration rate, minimum infiltration rate, and decay constant in Horton’s infiltration equation were used to calibrate the model.

3.1. Selecting Monitoring Nodes in Each Drainage Area and Stream

3.2. Results of the Rainfall Runoff Simulation 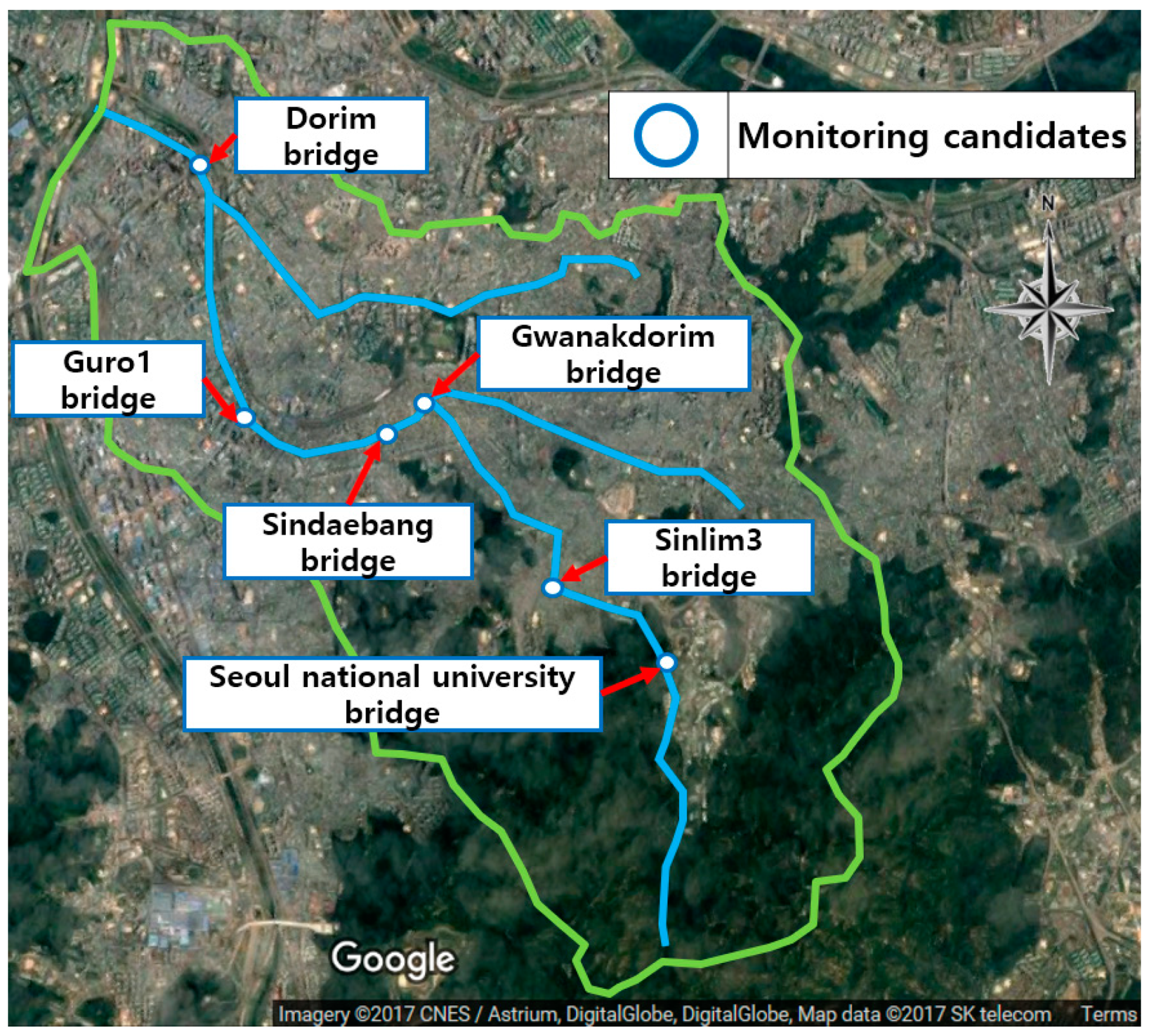