During the past two decades, hydraulic jumps have been investigated using Computational Fluid Dynamics (CFD). The second part of this two-part study is devoted to the state-of-the-art of the numerical simulation of the hydraulic jump. First, the most widely-used CFD approaches, namely the Reynolds-Averaged Navier–Stokes (RANS), the Large Eddy Simulation (LES), the Direct Numerical Simulation (DNS), the hybrid RANS-LES method Detached Eddy Simulation (DES), as well as the Smoothed Particle Hydrodynamics (SPH), are introduced pointing out their main characteristics also in the context of the best practices for CFD modeling of environmental flows. Second, the literature on numerical simulations of the hydraulic jump is presented and discussed. It was observed that the RANS modeling approach is able to provide accurate results for the mean flow variables, while high-fidelity methods, such as LES and DES, can properly reproduce turbulence quantities of the hydraulic jump. Although computationally very expensive, the first DNS on the hydraulic jump led to important findings about the structure of the hydraulic jump and scale effects. Similarly, application of the Lagrangian meshless SPH method provided interesting results, notwithstanding the lower research activity. At the end, despite the promising results still available, it is expected that with the increase in the computational capabilities, the RANS-based numerical studies of the hydraulic jump will approach the prototype scale problems, which are of great relevance for hydraulic engineers, while the application at this scale of the most advanced tools, such as LES and DNS, is still beyond expectations for the foreseeable future. Knowledge of the uncertainty associated with RANS modeling may allow the careful design of new hydraulic structures through the available CFD tools. View Full-Text
Keywords: hydraulic jump; two-phase flow; computational fluid dynamics; turbulent free surface flows; numerical simulation accuracy hydraulic jump; two-phase flow; computational fluid dynamics; turbulent free surface flows; numerical simulation accuracy
►▼ Show Figures 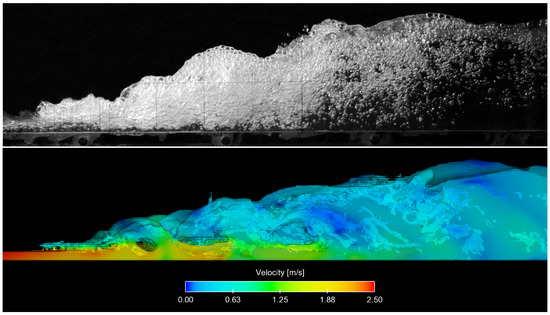