Effect of Soil Texture on Water Movement of Porous Ceramic Emitters: A Simulation Study
Next Article in Special Issue

The tableland-gully region is one of the main topographic-ecological units in the Chinese Loess Plateau (CLP), and the soil in this region suffers from serious water erosion. In recent years, much work has been conducted to control soil erosion in this area. This paper summarized the development of soil and water conservation researches in the CLP from the bibliometric perspective based on the Science Citation Index (SCI) and Chinese National Knowledge Infrastructure (CNKI) databases. The quantity of SCI literatures has increased rapidly since 2007, with an average annual growth rate of 21.4%, and the quantity of CNKI literatures in the last decade accounted for 62% of the past 30 years. The development trends showed that early SCI research was related to loess geology in the context of ecological remediation, while the CNKI literature focused on agricultural production under comprehensive management. Over time, the research themes of the two databases gradually became unified, i.e., the management of sloping farmland and the improvement of agricultural productivity. Subsequently, the themes gradually extended to the disposition of comprehensive control measures for soil erosion and the environmental effect of agro-fruit ecosystems. The highly cited papers mainly focused on soil reservoir reconstruction, soil erosion factors, and environmental effects of vegetation restoration. Two aspects need further study, including (i) the effect of soil erosion control under different ecological remediation patterns; and, (ii) the ecosystem maintenance mechanism and regulation approaches that are based on the sustainable utilization of soil and water resources in the tableland-gully region of the Loess Plateau. View Full-Text
Keywords: bibliometric analysis; soil erosion; soil and water conservation; the Chinese Loess Plateau bibliometric analysis; soil erosion; soil and water conservation; the Chinese Loess Plateau
►▼ Show Figures 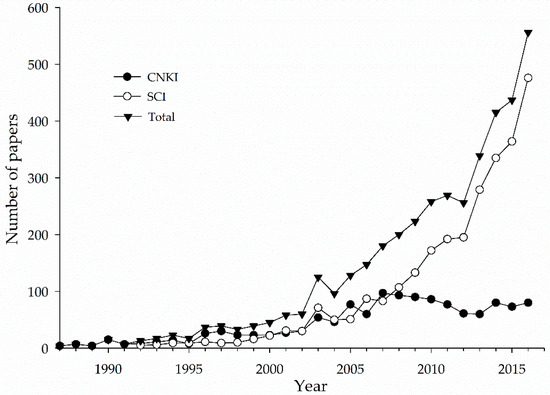