The year 2017 was anomalously warm and dry across the whole Italian Peninsula, and the paucity of precipitation was emphasized during the extreme summer drought of the main Italian river, i.e., the Po river, which was characterized by a discharge persistently below 600 m3/s (in spite of the average discharge of 1500 m3/s). During these extreme conditions, the Po river oxygen and hydrogen stable isotopes (δD, δ18O) displayed a relation (δD = 6.1*δ18O − 6.6) significantly different from that recorded in the previous investigation of the years 2012–2014 (δD = 7.5*δ18O + 6.5). The lowering of the slope and the negative intercept clearly reflect the transition toward arid conditions that characterized the investigated period. The difference is expressed by the derivative parameter Line-Conditioned excess (LC-exc), which better describes the compositional difference of Po river water in the year 2017 with respect to that of the period 2012–2014, when the system was less affected by warm or dry conditions and the river discharge was more similar to the historical trends. The isotopic anomaly observed in 2017 throughout the river is even greater in the terminal part of the river, where in the meanders of the deltaic branches, the river flow progressively slows down, suffering significant evaporation. The isotopic signature of the water appears, therefore, an appropriate tool to monitor the watershed response to evolving environmental conditions. These sensitive isotopic parameters could be interpreted as “essential climate variables” (ECV) that are physical, chemical, or biological geo-referenced parameters that critically contribute to the characterization of Earth’s climate. Future research needs to find relationships between ECV (including the water stable isotopes) and the evolution of ecosystems, which especially in the Mediterranean area, appear to be fragile and severely affected by natural and anthropogenic processes. View Full-Text
Keywords: Po river; Large-scale catchment; drought; hydro-archive; water stable isotopes Po river; Large-scale catchment; drought; hydro-archive; water stable isotopes
►▼ Show Figures 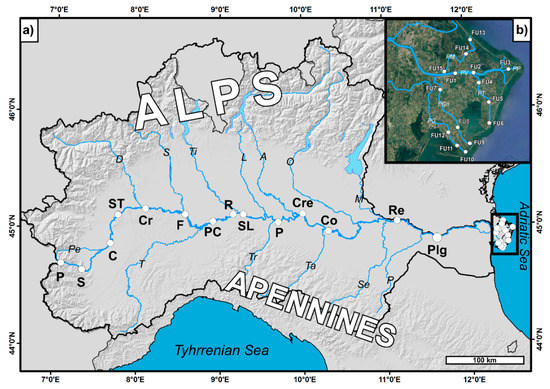