Assessing the Potential Impact of Rising Production of Industrial Wood Pellets on Streamflow in the Presence of Projected Changes in Land Use and Climate: A Case Study from the Oconee River Basin in Georgia, United States
Previous Article in Special Issue

Extreme rainfall events, larger than 500-year floods, have produced a large number of flooding events in the land and also close to the shore, and have resulted in massive destruction of hydraulic infrastructures because of scour. In light of climate change, this trend is likely to continue in the future and thus, resilience, security and sustainability of hydraulic infrastructures has become an interesting topic for hydraulic engineering stakeholders. In this study, a physical model experiment with a geometric similarity of the bridge embankments, abutments, and bridge deck as well as river bathymetry was conducted in a laboratory flume. Flow conditions were utilized to get submerged orifice flow and overtopping flow in the bridge section in order to simulate extreme hydrologic flow conditions. Point velocities of the bridge section were measured in sufficient details and the time-averaged velocity flow field were plotted to obtain better understandings of scour and sediment transport under high flow conditions. The laboratory study concluded that existing lateral flow contraction as well as vertical flow contraction resulted in a unique flow field through the bridge and the shape of velocity profile being “fuller”, thereby increasing the velocity gradients close to the bed and subsequently resulting in a higher rate of bed sediment transport. The relationships between the velocity gradients measured close to the bed and the degree of flow contraction through the bridge are suggested. Furthermore, based on the location of maximum scour corresponding to the measured velocity flow field, the classification of scour conditions, long setback abutment scour and short setback abutment scour, are also suggested. View Full-Text
Keywords: abutment; overtopping flow; pressure flow; physical hydraulic modeling; scour and velocity field abutment; overtopping flow; pressure flow; physical hydraulic modeling; scour and velocity field
►▼ Show Figures 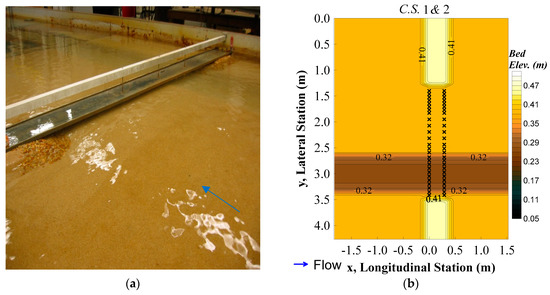