Evapotranspiration of the Brazilian Pampa Biome: Seasonality and Influential Factors

The dry drainage system (DDS) is an alternative technique for controlling salinization. To quantify its role in soil salinity control, a five-year field observation from 2007 to 2011 was completed in a 2900 ha experimental plot in Yonglian Experimental Station, Hetao Irrigation District, China. Results showed that the groundwater table depth in the fallow areas quickly responded to the lateral recharge from the surrounding croplands during irrigation events. The groundwater electrical conductivity (GEC) of fallow areas increased from 5 mS·cm−1 to 15 mS·cm−1, whereas the GEC below croplands produced small fluctuations. The analysis of water and salt balance showed that the excess water that moved to fallow was roughly four times that moved by an artificial drainage system and with 7.7 times the corresponding salt. The fallow areas act as a drainage repository to receive excess water and salt from surrounding irrigated croplands. Slight salt accumulation occurred in irrigated croplands and salts accumulated, with an accelerating trend over the final two years. The evaporation capability weakened, partly due to the salt crust in the topsoil, and the decrease in soil permeability in the soil column, which was almost impermeable to water. Using halophytes may be an effective method to remove salts that have accumulated in fallow areas, having great economic and ecological value. A DDS may be effective and sustainable in situations where the fallow areas can sustain an upward capillary flux from planted halophytes. View Full-Text
Keywords: dry drainage system; water and salt balance; groundwater; evaporation; salinity dry drainage system; water and salt balance; groundwater; evaporation; salinity
►▼ Show Figures 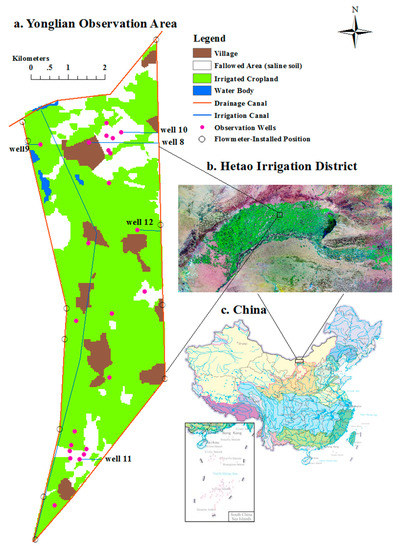