Dokan is a multipurpose dam located on the Lesser Zab River in the Iraq/Kurdistan region. The dam has operated since 1959, and it drains an area of 11,690 km2. All reservoirs in the world suffer from sediment deposition. It is one of the main problems for reservoir life sustainability. Sustainable reservoir sediment-management practices enable the reservoir to function for a longer period of time by reducing reservoir sedimentation. This study aims to assess the annual runoff and sediment loads of the Dokan Dam watershed using the soil and water assessment tool (SWAT) model to evaluate the relative contributions in comparison with the total values delivered from both watershed and Lesser Zab River and to identify the basins with a high sediment load per unit area. These help in the process of developing a plan and strategy to manage sediment inflow and deposition. The SUFI-2 program was applied for a model calibrated based on the available field measurements of the adjacent Derbendekhan Dam watershed, which has similar geological formations, characteristics and weather. For the calibration period (1961–1968), the considered statistical criteria of determination coefficients and Nash–Sutcliffe model efficiency were 0.75 and 0.64 for runoff while the coefficients were 0.65 and 0.63 for sediment load, respectively. The regionalization technique for parameter transformation from Derbendekhan to Dokan watershed was applied. Furthermore, the model was validated based on transformed parameters and the available observed flow at the Dokan watershed for the period (1961–1964); they gave reasonable results for the determination coefficients and Nash–Sutcliffe model efficiency, which were 0.68 and 0.64, respectively. The results of SWAT project simulation for Dokan watershed for the period (1959–2014) indicated that the average annual runoff volume which entered the reservoir was about 2100 million cubic meters (MCM). The total sediment delivered to the reservoir was about 72 MCM over the 56 years of dam life, which is equivalent to 10% of the reservoir dead storage. Two regression formulas were presented to correlate the annual runoff volume and sediment load with annual rain depth for the studied area. In addition, a spatial distribution of average annual sediment load was constructed to identify the sub basin of the high contribution of sediment load. View Full-Text
Keywords: Dokan Dam; runoff; sediment load; SWAT Dokan Dam; runoff; sediment load; SWAT
►▼ Show Figures 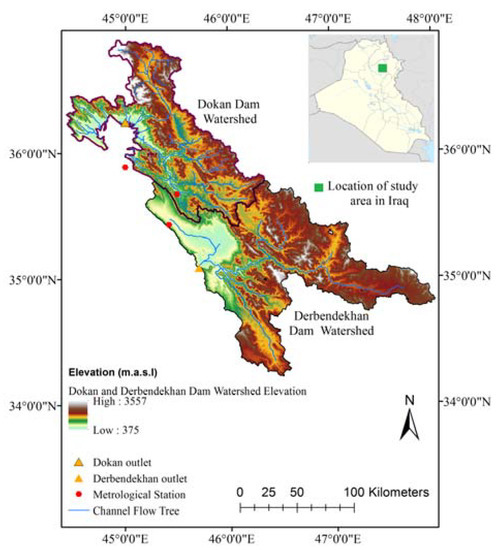