David A. Polya 2 and

The Choygan area of southern Siberia, Russia hosts a variety of CO2-rich thermal mineral and other waters emerging from springs at temperatures between 7 °C and 39 °C. Chemical analyses of the spring waters (n = 33) were carried out to characterise the waters and determine their origin. A continuum of compositions was observed between relatively lower temperature (7 °C) HCO3-Ca-Na dominated waters with relatively low amount of total dissolved solids (TDS) and high Eh, and higher temperature (39 °C) HCO3-Na-Ca dominated waters with higher TDS and lower Eh—this reflects largely conservative mixing of these components between near surface low temperature, oxidising groundwaters and higher temperature, more reducing thermal waters derived from a deeper geothermal reservoir. Stable isotopic data are consistent with all the water ultimately being derived from meteoric water that has undergone varying degrees of isotopic fractionation following evaporation. The inferred δ18O and δ2H isotopic composition of the unfractionationed meteoric waters is lighter than that expected that of mean annual local precipitation, which together with a strong negative correlation between δ18O and the elevation of the sampled discharging springs, suggests recharge at higher elevations (1600 m to 3000 m; average 2600 m). Reservoir temperature, calculated using geothermometers and an analysis of saturation indices of plausible reservoir minerals, ranged from 70 °C to 100 °C at an inferred depth of 2 to 3 km. Not all chemical components were found to follow conservative mixing behaviour. In particular, (i) the CO2 contents of the waters were highly variable, suggesting either varying degrees of degassing and/or near discharge admixture with air, and (ii) SO4 concentrations in the lower temperature thermal CO2-rich waters were highly variable, suggesting a role of near surface oxidation processes, for example of pyrite, in modifying the concentration of redox sensitive components. Limited δ13C data are consistent with the CO2 predominately being derived from dissolution of metamorphic/igneous carbonate minerals in the reservoir. Based on geological conditions, isotope and chemical data, a conceptual circulation model of the Choygan hydrothermal system is proposed. View Full-Text
Keywords: hydrochemistry; thermal waters; CO2; geothermometry; stable isotopes; fluid–mineral equilibria hydrochemistry; thermal waters; CO2; geothermometry; stable isotopes; fluid–mineral equilibria
►▼ Show Figures 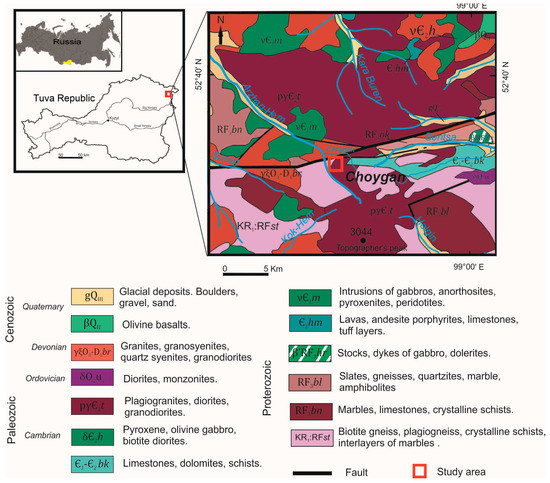