On Strong Nearshore Wind-Induced Currents in Flow-Through Gulfs: Variations on a Theme by Csanady

Csanady’s (1973) model, used to explain the development of strong, wind-induced nearshore currents in long lakes, has been extended to explain the same phenomenon in flow-through semi-enclosed gulfs. As in the original theory, it is predicted that the depth-averaged velocities move with the wind in regions shallower than the characteristic depth and upwind in deeper parts of the basin. The characteristic depth in the modified theory, however, is shown to be larger than the characteristic depth of the original theory, which is the basin mean depth, by a parameter λ, which can be calculated using the wind stress, the cross-section area and the volumetric inflow into the gulf. The theory is further used to examine in detail the scaling of the flow and identify the dimensional parameters underlying the formulation of the Csanady model. By expanding in an appropriately-defined inverse, Rossby number, which can be made arbitrarily large for small times, it is shown that under the influence of the Coriolis force, the free surface assumes a characteristic S-like shape and the shorewise volume flux an M-like shape. It is suggested that the shorewise flux might be of interest in environmental applications. The predictions of both variations of the original model of Csanady have been illustrated by numerical simulations, in pertinent idealized geometries, and have been also used to explain salient features of the wind-induced circulation in the Gulf of Patras in Western Greece. View Full-Text
Keywords: flow-through gulfs; wind-induced flow acceleration; return upwind flow; Coriolis effect; free-surface shape; shorewise exchange currents; cross-flow bathymetry flow-through gulfs; wind-induced flow acceleration; return upwind flow; Coriolis effect; free-surface shape; shorewise exchange currents; cross-flow bathymetry
►▼ Show Figures 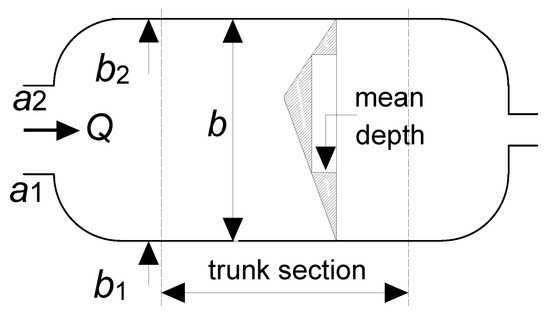