An Investigation on Performance and Structure of Ecological Revetment in a Sub-Tropical Area: A Case Study on Cuatien River, Vinh City, Vietnam
Next Article in Special Issue

Gravity currents generated by lock release are studied in the case of initially quiescent ambient fluid and oscillating ambient fluid (regular surface waves). In particular, the dynamics of the density currents are investigated by means of CFD numerical simulations. The aim is to evaluate the influence of the ambient fluid velocity field on the observed mixing and turbulent processes. Results of two different turbulence closure models, namely the standard turbulence model and the LES model, are analyzed. Model predictions are validated through comparison with laboratory measurements. Results show that the model is able to catch the main current propagation parameters (e.g., front velocity at the different phases of the evolution of the current, gravity current depth, etc.), but that a LES model provides more realistic insights into the turbulent processes (e.g., formation of interfacial Kelvin–Helmholtz billows, vortex stretching and eventual break up into 3D turbulence). The ambient fluid velocity field strongly influences the dynamics of the gravity currents. In particular, the presence of an oscillatory motion induces a relative increase of mixing at the front (up to 25%) in proximity of the bottom layer, and further upstream, an increase of the mixing process (up to 60%) is observed due to the mass transport generated by waves. The observed mixing phenomena observed are also affected by the ratio between the gravity current velocity and the horizontal orbital velocity induced by waves , which has a stronger impact in the wave dominated regime (< 1). View Full-Text
Keywords: CFD; Kelvin–Helmholtz; billow; lobe; cleft; gravity current; surface waves CFD; Kelvin–Helmholtz; billow; lobe; cleft; gravity current; surface waves
►▼ Show Figures 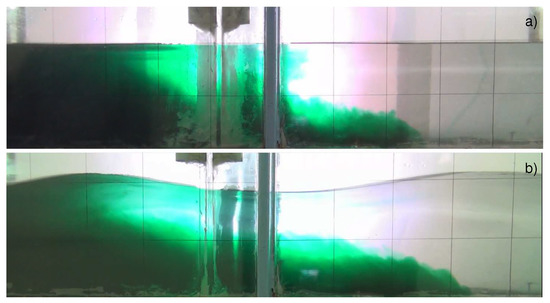