In 1983, the North Cascade Glacier Climate Project (NCGCP) began the annual monitoring of the mass balance on 10 glaciers throughout the range, in order to identify their response to climate change. Annual mass balance (Ba) measurements have continued on seven original glaciers, with an additional two glaciers being added in 1990. The measurements were discontinued on two glaciers that had disappeared and one was that had separated into several sections. This comparatively long record from nine glaciers in one region, using the same methods, offers some useful comparative data in order to place the impact of the regional climate warmth of 2015 in perspective. The mean annual balance of the NCGCP glaciers is reported to the World Glacier Monitoring Service (WGMS), with two glaciers, Columbia and Rainbow Glacier, being reference glaciers. The mean Ba of the NCGCP glaciers from 1984 to 2015, was −0.54 m w.e.a−1 (water equivalent per year), ranging from −0.44 to −0.67 m w.e.a−1 for individual glaciers. In 2015, the mean Ba of nine North Cascade glaciers was −3.10 m w.e., the most negative result in the 32-year record. The correlation coefficient of Ba was above 0.80 between all North Cascade glaciers, indicating that the response was regional and not controlled by local factors. The probability of achieving the observed 2015 Ba of −3.10 is 0.34%. View Full-Text
Keywords: glacier mass balance; North Cascade Range; climate change glacier mass balance; North Cascade Range; climate change
►▼ Show Figures 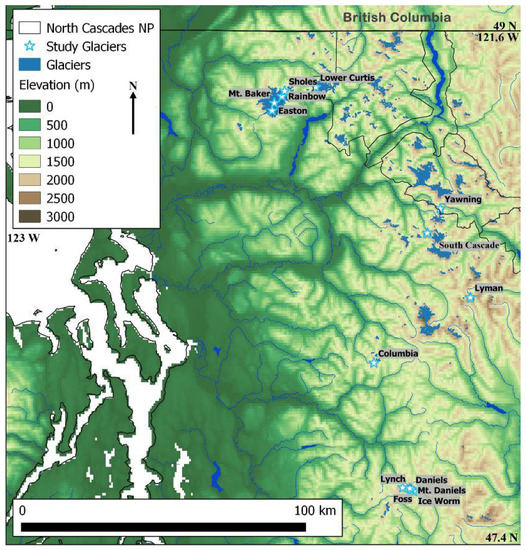