Changing land-use associated with urbanization has resulted in shifts in riparian assemblages, stream hydraulics, and sediment dynamics leading to the degradation of waterways. To combat degradation, restoration and management of riparian zones is becoming increasingly common. However, the relationship between flora, especially the influence of invasive species, on sediment dynamics is poorly understood. Bank erosion and turbidity were monitored in the Tookany Creek and its tributary Mill Run in the greater Philadelphia, PA region. To evaluate the influence of the invasive species Reynoutria japonica (Japanese knotweed) on erosion, reaches were chosen based on their riparian vegetation and degree of incision. Bank pins and turbidity loggers were used to estimate sediment erosion. Erosion calculations based on bank pins suggest greater erosion in reaches dominated by knotweed than those dominated by trees. For a 9.5-month monitoring period, there was 29 cm more erosion on banks that were also incised, and 9 cm more erosion in banks with little incision. Turbidity responses to storm events were also higher (77 vs. 54 NTU (nephelometric turbidity unit)) in reaches with knotweed, although this increase was found when the reach dominated by knotweed was also incised. Thus, this study linked knotweed to increased erosion using multiple methods. View Full-Text
Keywords: urban hydrology; bank pins; turbidity; knotweed urban hydrology; bank pins; turbidity; knotweed
►▼ Show Figures 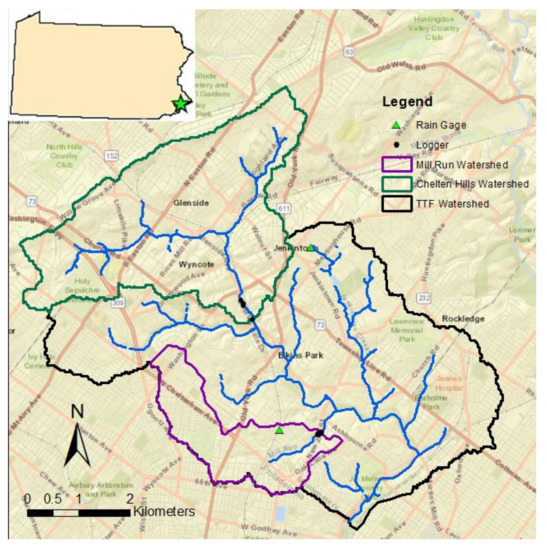