Inorganic phosphorus (P)-solubilizing bacteria (IPSB) and organic P-mineralizing bacteria (OPMB) were isolated from bacteria that were first extracted from the rhizosphere soil of a natural wetland and then grown on either tricalcium phosphate or lecithin medium. The solubilizing of inorganic P was the major contribution to P availability, since the isolated bacteria released much more available P from inorganic tricalcium phosphate than lecithin. IPSB No. 5 had the highest P release rate, that is, 0.53 mg·L−1·h−1 in 96 h, and R10′s release rate was 0.52 mg·L−1·h−1 in 10 days. The bacteria were identified as Pseudomonas sp. and Pseudomonas knackmussii, respectively. R10 released as much as 125.88 mg·L−1 dissolved P from tricalcium phosphate medium, while R4 released the most dissolved P from organic P medium among the isolates, with a concentration of 1.88 mg·L−1 and a releasing rate of 0.0078 mg·L−1·h−1 in ten days. P releasing increased with a pH decrease only when it was from inorganic P, not organic lecithin, and there was no significant correlation between the culture pH and P solubilizing. High-throughput sequencing analysis revealed that the dominant phylum in the studied wetland rhizosphere consisted of Acidobacteria, Proteobacteria, Bacteroidetes and Chloroflexi, accounting for 34.9%, 34.2%, 8.8% and 4.8%, respectively. View Full-Text
Keywords: wetland; rhizosphere bacteria; available phosphorus; pH wetland; rhizosphere bacteria; available phosphorus; pH
►▼ Show Figures 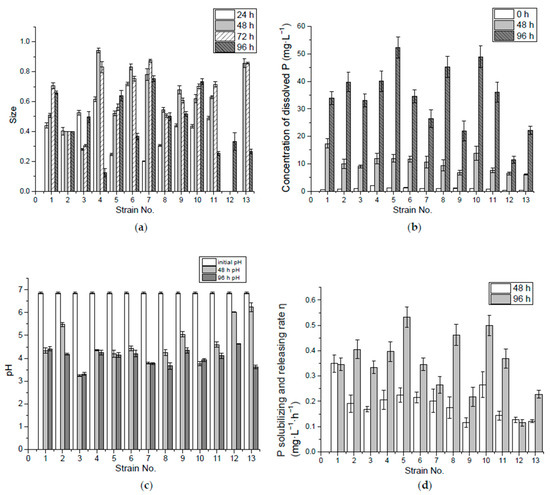