Analysis of Intra and Interseasonal Rainfall Variability and Its Effects on Pearl Millet Yield in a Semiarid Agroclimate: Significance of Scattered Fields and Tied Ridges
Previous Article in Journal

In the context of a growing population in West Africa and frequent yield losses due to erratic rainfall, it is necessary to improve stability and productivity of agricultural production systems, e.g., by introducing and assessing the potential of alternative irrigation strategies which may be applicable in this region. For this purpose, five irrigation management strategies, ranging from no irrigation (NI) to controlled deficit irrigation (CDI) and full irrigation (FI), were evaluated concerning their impact on the inter-seasonal variability of the expected yields and improvements of the yield potential. The study was conducted on a maize crop (Zea mays L.) at a representative site in northern Togo with a hot semi-arid climate and pronounced dry and wet rainfall seasons. The OCCASION (Optimal Climate Change Adaption Strategies in Irrigation) framework was adapted and applied. It consists of: (i) a weather generator for simulating long climate time series; (ii) the AquaCrop model, which was used to simulate the irrigation system during the growing season and the yield response of maize to the considered irrigation management strategies; and (iii) a problem-specific algorithm for optimal irrigation scheduling with limited water supply. We found high variability in rainfall during the wet season which leads to considerable variability in the expected yield for rainfed conditions (NI). This variability was significantly reduced when supplemental irrigation management strategies (CDI or FI) requiring a reasonably low water demand of about 150 mm were introduced. For the dry season, it was shown that both irrigation management strategies (CDI and FI) would increase yield potential for the local variety TZEE-W up to 4.84 Mg/ha and decrease the variability of the expected yield at the same time. However, even with CDI management, more than 400 mm of water is required if irrigation would be introduced during the dry season in northern Togo. Substantial rainwater harvesting and irrigation infrastructures would be needed to achieve that. View Full-Text
Keywords: AquaCrop model; maize; deficit irrigation; crop-water production function; West Africa AquaCrop model; maize; deficit irrigation; crop-water production function; West Africa
►▼ Show Figures 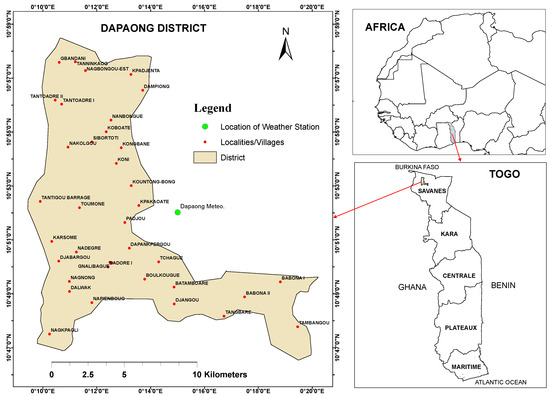