All of the rainfall temporal distribution models considered in this study—the Yen and Chow model, Mononobe model, alternating block method, Huff model, and Keifer and Chu model—were fitted to each of the annual maximum rainfall events observed in Seoul, Korea. Six rainfall events were excluded in this application, as their durations were less than three hours. The third quantile was considered for the Huff model, which is recommended in Korea [29]. The third quantile is also the most probable quantile of the observed annual maximum rainfall events.
Somewhat different information was used for the fitting of each rainfall temporal distribution model. For example, the Yen and Chow model and Mononobe model require the total rainfall depth, but the alternating block method and Keifer and Chu model require the rainfall intensity from the rainfall I-D-F curve. The estimated return period of a rainfall event is also needed to handle the rainfall I-D-F curve. In this study, the rainfall I-D-F curve developed for the Seoul rain gauge station was used for this purpose [29]. For example, the return period of the annual maximum rainfall in 1984 was estimated to be about 11 years, and that in 2001 to be about three years.
With the estimated return period along with the total rainfall depth and rainfall duration, the rainfall temporal distribution models could be fitted for each annual maximum rainfall event. For example, Figure 2 shows the fitting results of the models to the annual rainfall events in 1984 and 2001. This figure shows that, basically, the peak time of a model is not coincident with that of the observed. This result is quite natural, considering the randomness of the peak time. Concerning the rainfall peak, the Huff model derived a smaller rainfall peak than the observed, which was also the same for the Yen and Chow model. The rainfall peak of the alternating block method and that of the Keifer and Chu model were found to be quite similar to the observed, while that of the Mononobe model was found to be much higher than the observed.

5. Sensitivity of the Runoff Peak to the Rainfall Temporal Distribution

5.1. Preparation of the Rainfall–Runoff Model

5.3. Preparation of the Rainfall–Runoff Model

C.Y. conceived and designed the idea of this research and wrote the manuscript. W.N. collected the data and conducted estimation of rainfall temporal distribution models using that data.

This work was supported by the Korea Agency for Infrastructure Technology Advancement (KAIA) grant funded by the Ministry of Land, Infrastructure and Transport (Grant 18AWMP-B083066-05). 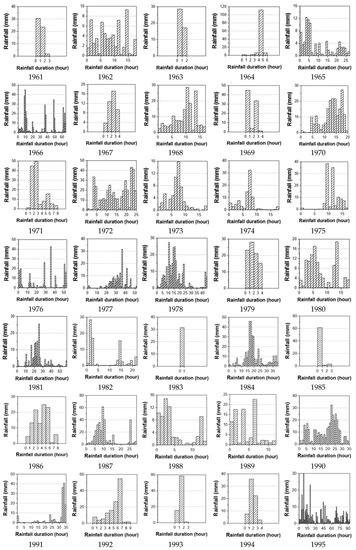 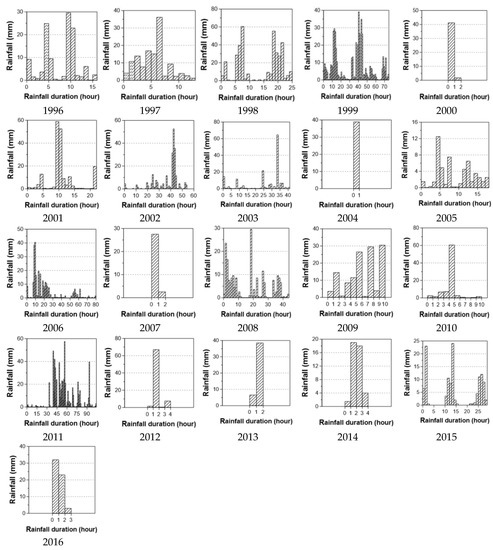 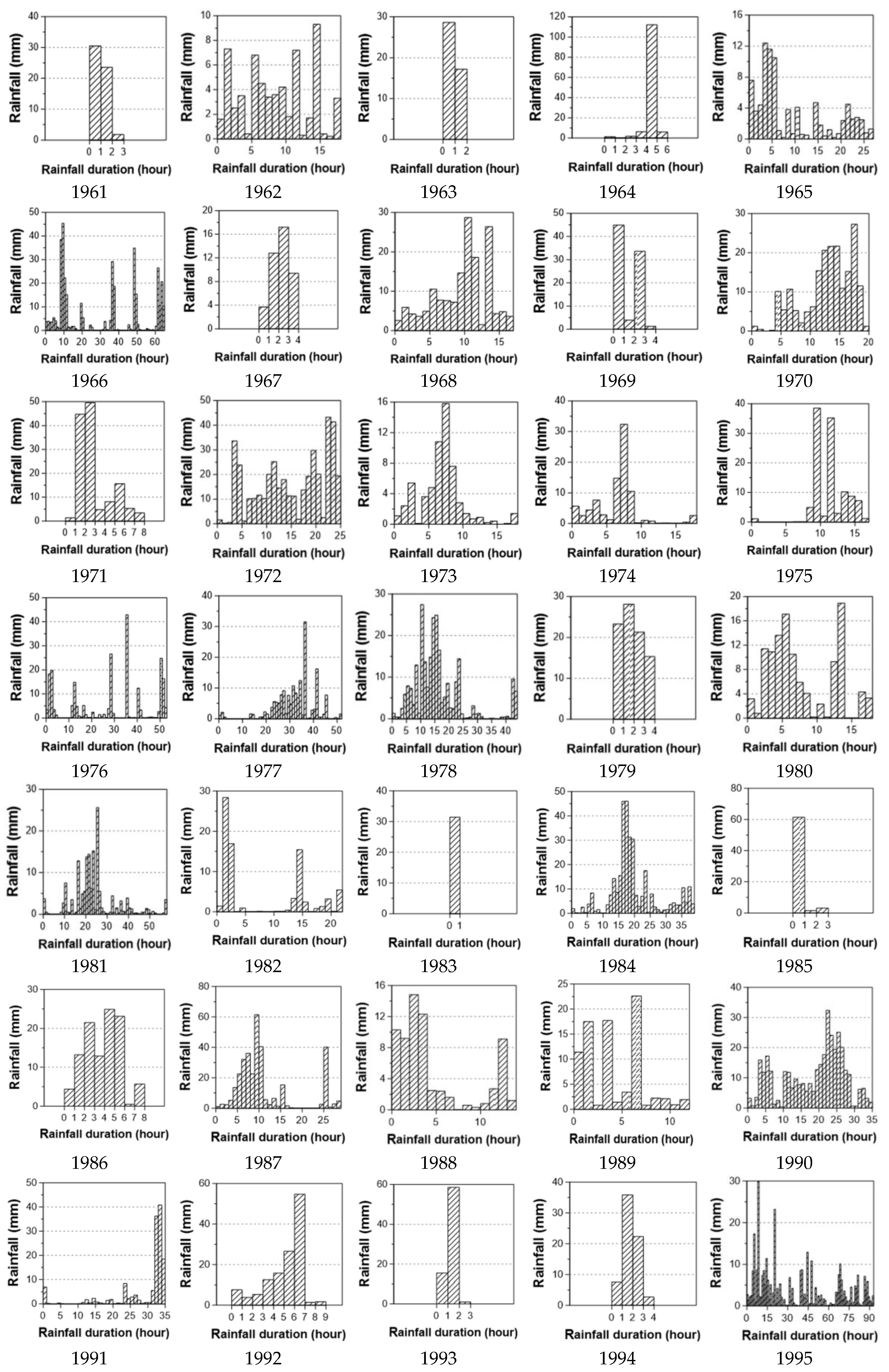 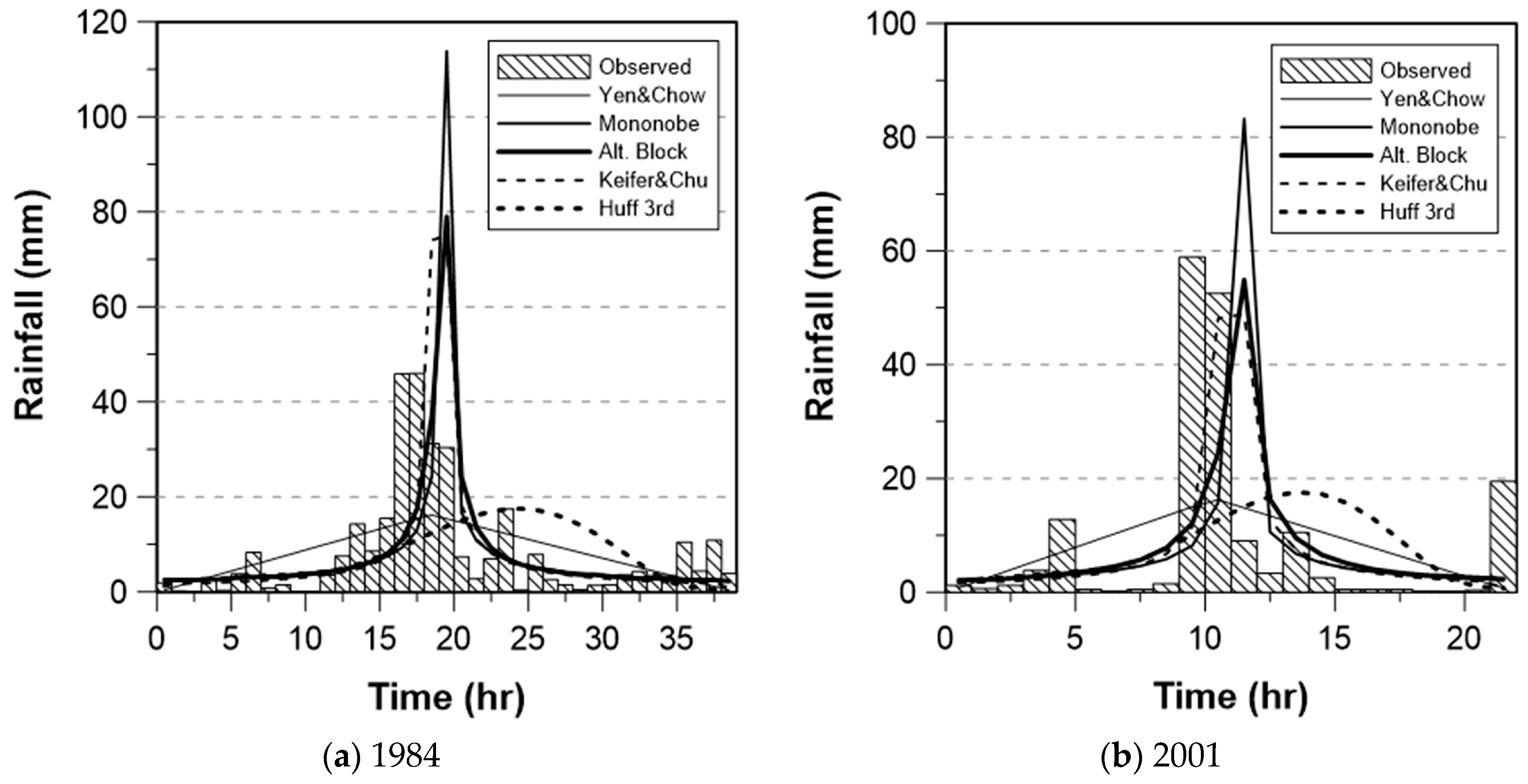 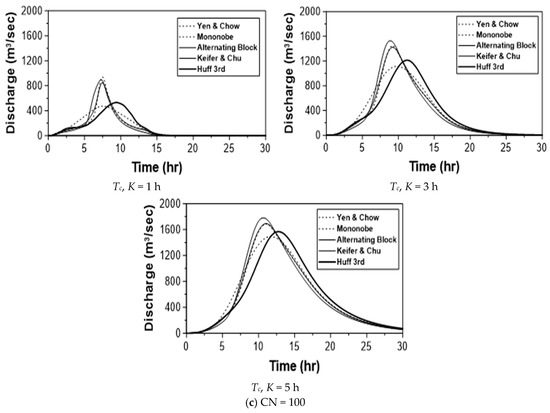 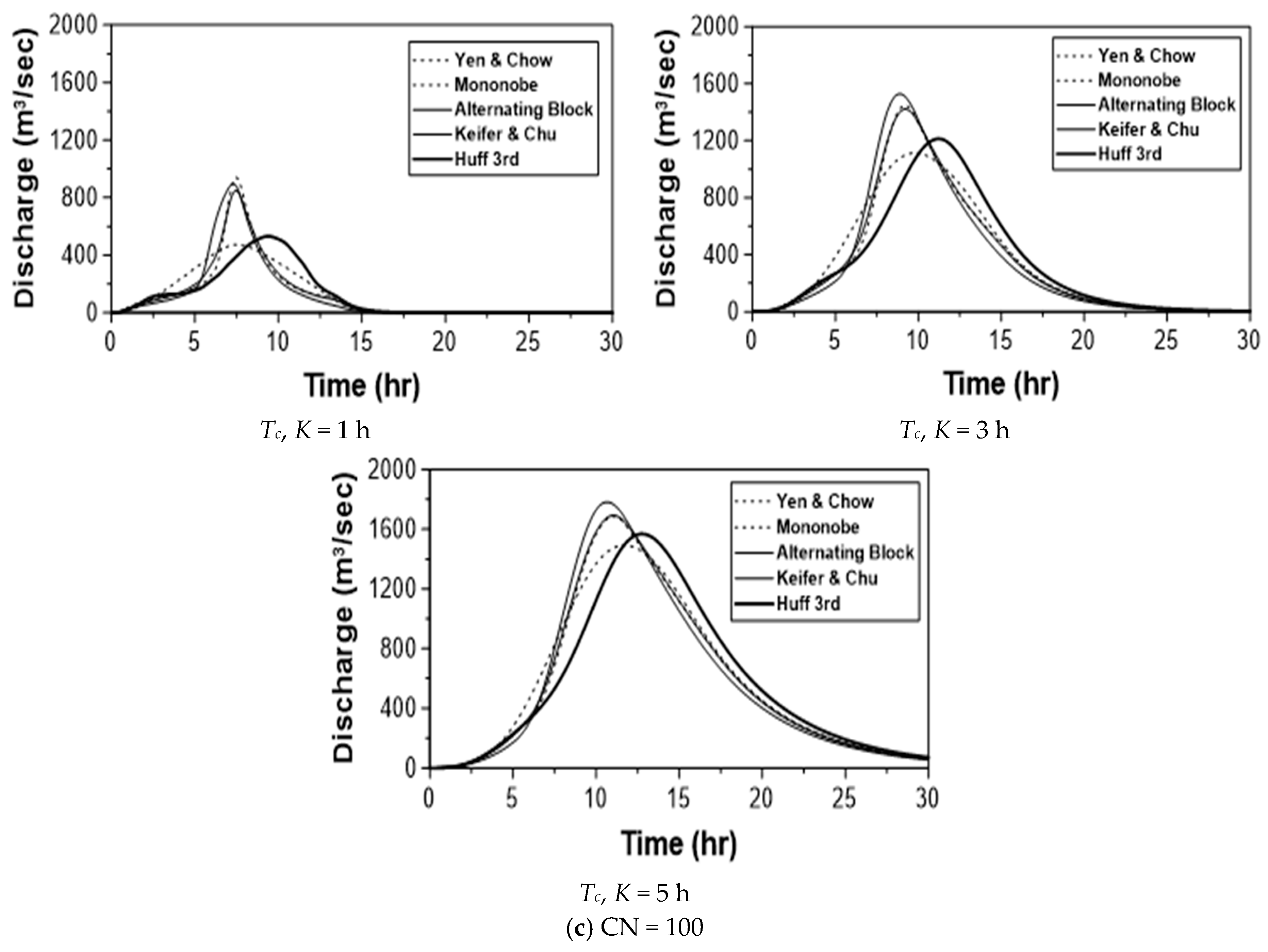 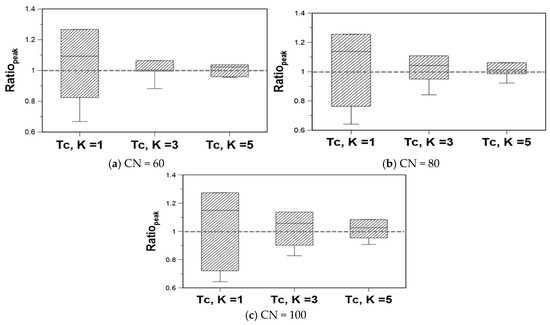 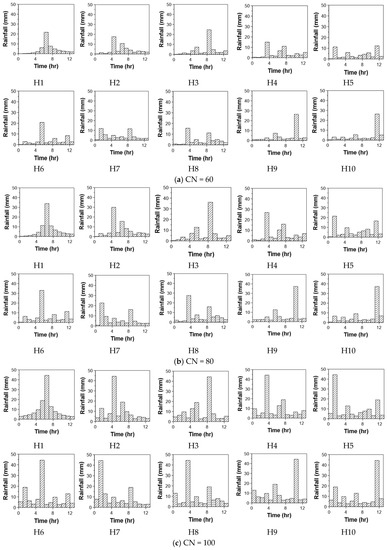 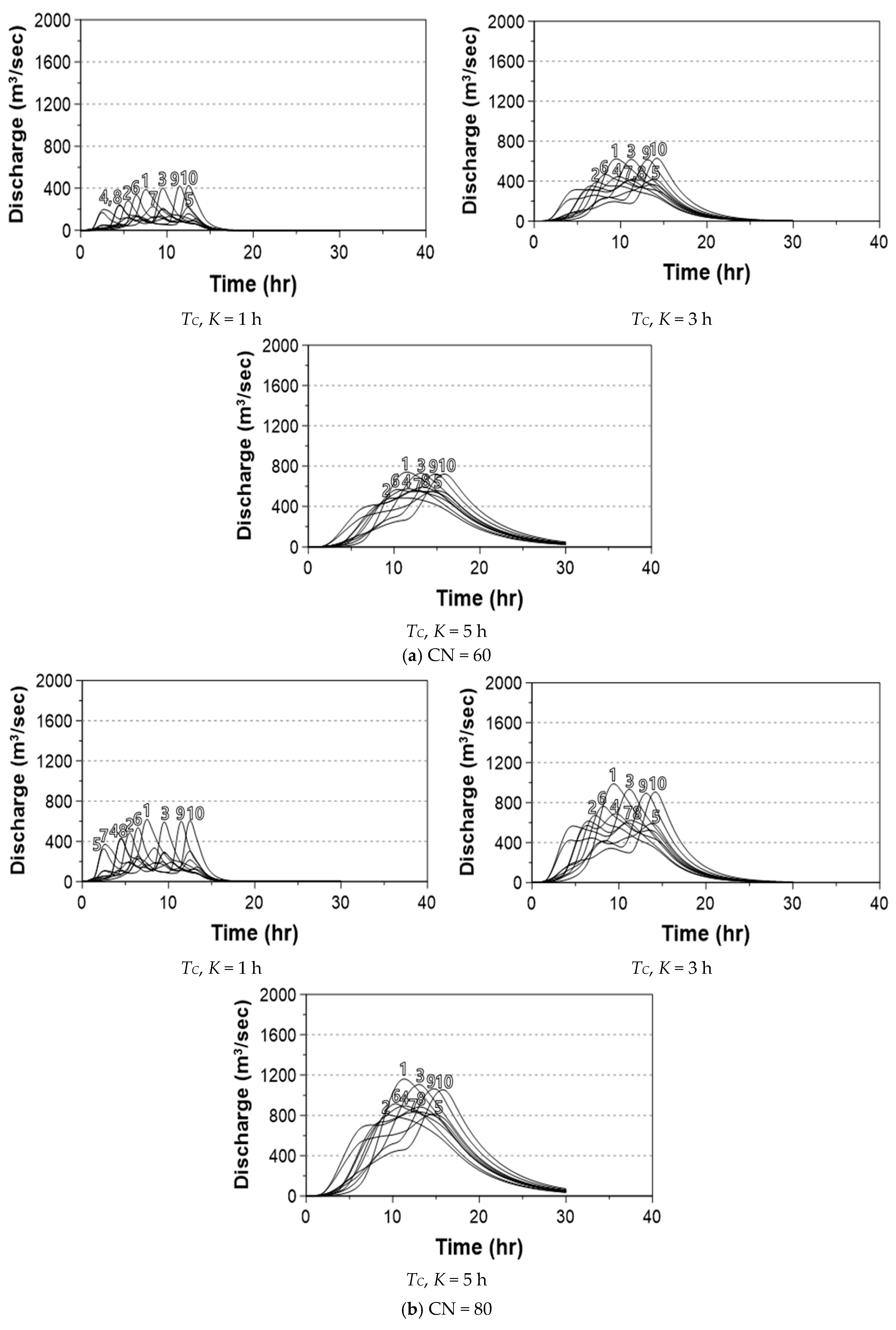