The Interrelations between a Multi-Layered Coastal Aquifer, a Surface Reservoir (Fish Ponds), and the Sea

This research examines the interrelations in a complex hydrogeological system, consisting of a multi-layered coastal aquifer, the sea, and a surface reservoir (fish ponds) and the importance of the specific connection between the aquifer and the sea. The paper combines offshore geophysical surveys (CHIRP) and on land TDEM (Time Domain Electro Magnetic), together with hydrological measurements and numerical simulation. The Quaternary aquifer at the southern Carmel plain is sub-divided into three units, a sandy phreatic unit, and two calcareous sandstone (‘Kurkar’) confined units. The salinity in the different units is affected by their connection with the sea. We show that differences in the seaward extent of its clayey roof, as illustrated in the CHIRP survey, result in a varying extent of seawater intrusion due to pumping from the confined units. FEFLOW simulations indicate that the FSI (Fresh Saline water Interface) reached the coastline just a few years after pumping has begun, where the roof terminates ~100 m from shore, while no seawater intrusion occurred in an area where the roof is continuous farther offshore. This was found to be consistent with borehole observations and TDEM data from our study sites. The water level in the coastal aquifer was generally stable with surprisingly no indication for significant seawater intrusion although the aquifer is extensively pumped very close to shore. This is explained by contribution from the underlying Late Cretaceous aquifer, which increased with the pumping rate, as is also indicated by the numerical simulations. View Full-Text
Keywords: seawater intrusion; multi-layered coastal aquifer; offshore geophysics; numerical model; tidal signal; sea–aquifer relations; fish ponds seawater intrusion; multi-layered coastal aquifer; offshore geophysics; numerical model; tidal signal; sea–aquifer relations; fish ponds
►▼ Show Figures 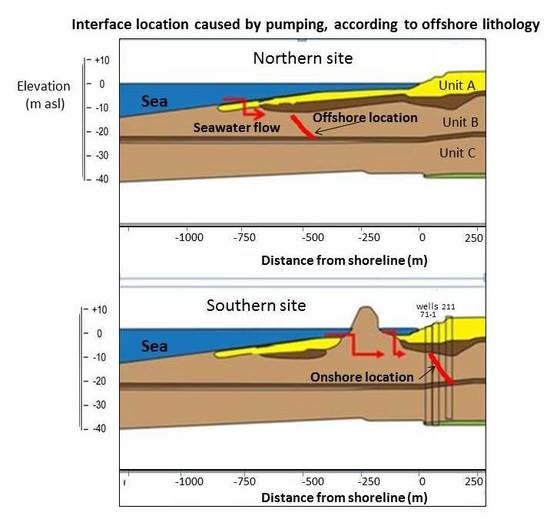