Characteristics and Sources of Heavy Metals in PM2.5 during a Typical Haze Episode in Rural and Urban Areas in Taiyuan, China
Previous Article in Journal

Concentration and Size Distribution of Culturable Bacteria in Ambient Air during Spring and Winter in Gliwice: A Typical Urban Area

Primary biological aerosol particles (PBAP) encompass many particle types that are derived from several biological kingdoms. These aerosol particles can be composed of both whole living units such as pollen, bacteria, and fungi, as well as from mechanically formed particles, such as plant debris. They constitute a significant proportion of the overall atmospheric particle load and have been linked with adverse health issues and climatic effects on the environment. Traditional methods for their analysis have focused on the direct capture of PBAP before subsequent laboratory analysis. These analysis types have generally relied on direct optical microscopy or incubation on agar plates, followed by time-consuming microbiological investigation. In an effort to address some of these deficits, real-time fluorescence monitors have come to prominence in the analysis of PBAP. These instruments offer significant advantages over traditional methods, including the measurement of concentrations, as well as the potential to simultaneously identify individual analyte particles in real-time. Due to the automated nature of these measurements, large data sets can be collected and analyzed with relative ease. This review seeks to highlight and discuss the extensive literature pertaining to the most commonly used commercially available real-time fluorescence monitors (WIBS, UV-APS and BioScout). It discusses the instruments operating principles, their limitations and advantages, and the various environments in which they have been deployed. The review provides a detailed examination of the ambient fluorescent aerosol particle concentration profiles that are obtained by these studies, along with the various strategies adopted by researchers to analyze the substantial data sets the instruments generate. Finally, a brief reflection is presented on the role that future instrumentation may provide in revolutionizing this area of atmospheric research. View Full-Text
Keywords: PBAP; WIBS; UV-APS; BioScout; fluorescence; real-time; bioaerosols PBAP; WIBS; UV-APS; BioScout; fluorescence; real-time; bioaerosols
►▼ Show Figures 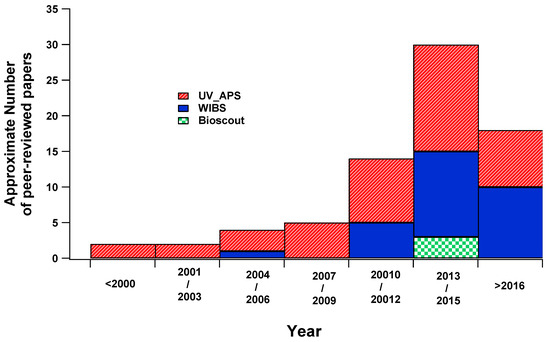