CCN Activity, Variability and Influence on Droplet Formation during the HygrA-Cd Campaign in Athens

The formation of ice in clouds occurs by homogeneous and heterogeneous ice nucleation [1]. Droplets in clouds nucleate on aerosol particles, some of which freeze to form ice crystals. A variety of ice-nucleating particles have been identified in clouds and implicated in precipitation, including soot, mineral dust, pollen, bacteria, and fungi [2,3]. There has been a resurgence in ice nucleation research within the last decade [4], largely because of the pressing need to understand the impact of aerosols on precipitation and climate. A recent AMS monograph on the topic has produced reviews in 11 chapters, covering topics including cirrus and contrail ice, ice fog, mixed-phase clouds, formation of precipitation, secondary ice production, and measurement methods [5]. In addition to atmospheric issues, there are a number of important commercial applications for ice nucleation research, including the production of artificial snow [6], the freezing and preservation of water-containing food products [7], the freeze protection of infrastructure [8], and the potential modulation of weather [9]. Many of these fields need new research to fill important gaps in fundamental knowledge of ice nucleation processes and their impacts.
Here, we identify and discuss six major research needs and unanswered research questions in atmospheric ice nucleation research, many of which have received only cursory attention in the past. The major research topics in need of further work came out of the two international workshops held in Vienna in 2015 and 2016, and are briefly outlined in Section 2 through 7 of this manuscript. The workshops were held 11–12 April, 2015 and 16–17 April, 2016 at the Italian Cultural Institute in Vienna, Austria. The workshop programs were designed around breakout discussions, where workshop attendees had engaging conversations with presenters immediately following each of the sessions. Some discussions concerned fundamental questions about ice nucleation, while others discussed engaging stakeholders with various topics presented throughout the workshop. Many of the attendees of the workshops were early career scientists actively engaged in ice nucleation research, introducing new ideas and concepts and the current state-of-the-art in ice nucleation. At different points throughout the 2015 workshop, speakers and other workshop attendees formed small groups to develop a list of hot topics and research priorities. At the 2016 workshop, this list was reduced after additional discussion to six topics, which are presented here as the basis of this manuscript.
This manuscript is not meant to be review paper, a monograph, or an overview article. Rather, this document represents a commentary on research needs and unanswered questions at the frontier of ice nucleation research. There are many unanswered questions which we hope to ‘nucleate’ by interacting closely as a growing interdisciplinary scientific community.

3. The Importance of Molecular Modeling for the Understanding of Heterogeneous Ice Nucleation

4. Identifying and Quantifying Contributions of Biological Ice Nuclei from Natural and Managed Environments

Biological ice nuclei (cells of microorganisms such as bacteria [91], pollen [92,93], or biogenic particles produced from organic matter [94,95]) have the potential to initiate heterogeneous ice nucleation in clouds and create precipitation. Moreover, they likely are the most abundant atmospheric ice nuclei covering nucleation temperatures between −2 °C and −10 °C [3], a temperature range critical for secondary ice formation [96]. It should be noted that recent studies examined feldspar samples of which some were ice active at a high temperature range [97,98], but it remains to be seen which role these particles play in the atmosphere, since their abundance is unclear. The plant pathogenic bacterium, Pseudomonas syringae, is an important microbial ice nucleator that has been found in clouds, rain, and snow [9,99,100,101,102,103]. A handful of fungi have also been reported to be ice nucleators, including species of Fusarium and Mortierella [104,105,106]. Representatives of these fungal genera can be found in soils throughout the globe, and very recent research showed that they can serve as a reservoir of biological ice nuclei transferred to mineral particles [107]. Other genera of ice-nucleating microorganisms have been reported [108], but their relative abundance in the atmosphere and their potential role in atmospheric processes is presently unknown. Even more poorly understood are biological ice nuclei from aquatic sources. About 70 percent of the Earth’s surface is covered with water—a huge reservoir for biological ice nuclei. Droplets containing biological ice nuclei can aerosolize from the water surface, liberating them into the atmosphere [109] where they can mediate pathogen dispersal, affect cloud formation as cloud condensation nuclei, and influence the earth’s radiation budget. Research is needed to understand the relative contributions of aquatic and terrestrial sources of ice nuclei [95,110,111,112,113], and environmental conditions that trigger their release into the atmosphere [114].
Future work under Section 4 should address the following three main questions:
Question 4.1: What is the taxonomic, genetic, and functional diversity of biological ice nuclei in nature?
Question 4.2: What are the ecological roles of ice-nucleating organisms in terrestrial and aquatic environments?
Question 4.3: What are the contributions of biological ice nuclei from aquatic environments to atmospheric processes?
Question 4.1 addresses our need to explore and discover the range of diversity of biological ice nuclei in natural environments [2]. Most of the previous reports of biological ice nuclei have focused on culturable microbes (e.g., Pseudomonas syringae and Fusarium avenaceum) (e.g., [91,105]) or ubiquitous components of plant matter, such as pollen grains from common tree species [92] or decaying leaf litter [115]. Understudied are the unculturable microbial ice nucleators, biogenic macromolecules serving as ice nuclei [94,116,117], microorganisms in harsh environments producing ice nuclei, and potential biogenic compounds produced by ice-nucleating plankton [24,95,118,119,120]. With new and improved taxonomic tools leveraging next generation sequencing [121], we can begin to probe the range of potential taxa that might act as ice nuclei or produce ice nuclei in different environments. Moreover, basic research is needed to describe the ice-nucleating processes by means of thermodynamics (see also 2.3 and 2.4) and to identify the chemical composition of biological ice nuclei, whose chemical nature is highly complex and poorly understood.
Question 4.2 is focused on a potential ecological advantage conferred by the ice-nucleation phenotype. Ice nucleation plays an important role in frost injury in crops ([122,123,124,125,126]; reviewed by [127]), and bacteria expressing ice-nucleating proteins may have a selective advantage as plant pathogens [108]. Ice-nucleating strains of Fusarium avenaceum [105] occupy a similar ecological niche (overwintering in cereal residues, and causing disease in small grains [128]) as non ice-nucleating strains of Fusarium graminearum [105], but the ecological role of the persistence of the ice-nucleating phenotype in these strains are presently unknown. Pollen from the same birch species (Betula pendula) was observed to be more ice active for Swedish than for Czech samples [116]. Some plants are able to acclimate to cold temperatures by expressing cold-induced genes, which likely serve to protect membranes from frost-induced injury (reviewed by [129]). Unknown is whether these anti-freezing mechanisms have played a unique role in the colonization of plants in cold environments, such as ecological zones of trees spanning altitudinal gradients along major mountain ranges. Schnell and Vali [95] described an increasing abundance of biological ice nucleating particles from terrestrial and marine sources from warmer to colder climate zones. Perhaps some environmental cues could cause some microbes to express ice-nucleating proteins in clouds [130,131], which could in turn provide a selective advantage for the microbes in returning to surface of the Earth via precipitation [99].
Question 4.3 addresses important knowledge gaps in our understanding of aquatic sources of biological ice nuclei. Though terrestrial environments are often considered to be the main source of biological ice nuclei, research is needed to understand aquatic sources of ice nuclei in both freshwater [111,112] and marine systems [24,95,113] (Figure 3). Recent work has been conducted in marine environments to find the connections between seawater properties and the composition of sea spray aerosol, and to examine the contribution of sea spray to atmospheric ice nucleating particles [24,95,113,132,133]. Unknown are potential seasonal fluctuations associated with aquatic ice nuclei (e.g., blooms in the spring and summer), and the contributions of melting glacial ice loaded with microbes [134]. Droplets containing biological ice nuclei have the potential to aerosolize from the water surface [109].

5. Examining the Role of Aging of Biological and Biogenic Ice Nuclei

7. Designing Lab and Field Experiments to Increase Our Understanding of the Role of Ice-Nucleating Particles in the Atmosphere

8. Conclusions: From Workshop Ideation to Action and Implementation

In this perspectives paper, we identified 17 unanswered questions in the study of ice nucleation. Now, our task as a research community is to find answers to these questions, and translate our ideas into action. There was general agreement among the workshop attendees that: (1) public relations must shed light on the research, education, and outreach being done by the ice nucleation community; (2) resources should be allocated to support ongoing and future research on ice nucleation; and (3) young scientists should be supported and mentored to ensure the future of the discipline. We need to build interdisciplinary teams of atmospheric scientists, chemists, physicists, biologists, engineers, hydrologists, meteorologists, and political scientists. These teams should include both senior and early career scientists developing new cutting-edge methods and unique approaches. These teams need to work together to establish and maintain a common, unified language for ice nucleation research. Vali et al. [15] started introducing such a common language by defining important terms and proposing acronyms. Despite this valuable incentive, there is still work to do to unify the language among the different communities dealing with ice nucleation.

The authors thank the many workshop participants for their ideas and constructive criticisms in the development of this document. We also like to thank the Italian Cultural Institute in Vienna (Ernst Kanitz) for hosting both workshops. The workshops were supported in part by contributions to H. Grothe from the ESF research networking Programme on the Micro-Dynamics of Ice (http://microdice.eu/) and the DFG funded Ice Nuclei research UnIT (INUIT, FOR 1525), WE 4722/1-2 (http://www.ice-nuclei.de/the-inuit-project/), and small grants from a number of companies (LH Vakuum Technik—Oerlikon Leybold Vaccum, Pfeiffer Vacuum Austria GmbH, Bruker Austria GmbH, and Droplet Measurement Technologies). Additional support for the workshops was provided to H. Grothe in the form of travel grants through the EGU. I. Coluzza and V. Bianco were supported in part from the Austrian Science Fund (FWF) project P26253-N27. Writing of this manuscript was supported in part by grants to D.G. Schmale through the National Science Foundation (NSF) under Grant Numbers DEB-1241068 (Dimensions: Collaborative Research: Research on Airborne Ice-Nucleating Species (RAINS)) and DGE-0966125 (IGERT: MultiScale Transport in Environmental and Physiological Systems (MultiSTEPS)) and to H. Grothe by the Austrian Research Fund FWF under grant number P26040 (The Ice Nucleation Activity of Carbonaceous Particles). J. Fröhlich-Nowoisky and U. Pöschl acknowledge support from the Deutsche Forschungsgemeinschaft (DFG, FR3641/1-2, FOR 1525 INUIT). Any opinions, findings, and conclusions or recommendations expressed in this material are those of the authors and do not necessarily reflect the views of the sponsors.

The authors declare no conflict of interest. The sponsors of this work had no role in the design of the study; in the collection, analyses, or interpretation of data; in the writing of the manuscript, and in the decision to publish the results. 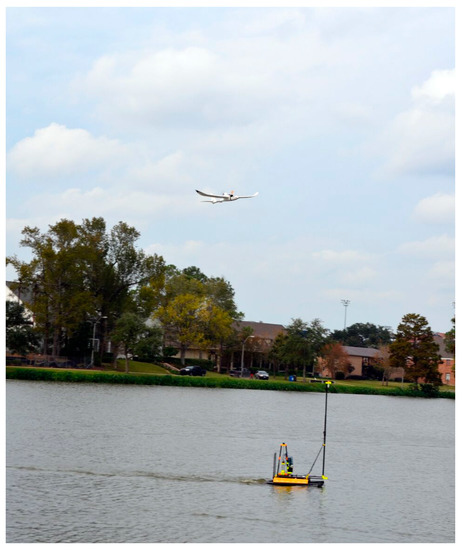 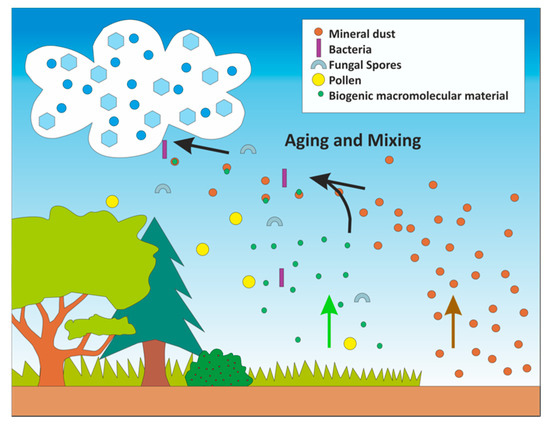 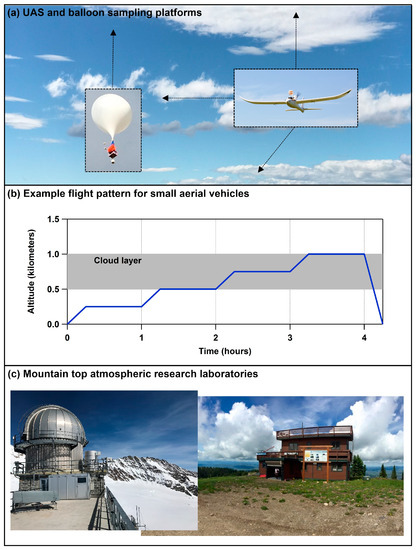 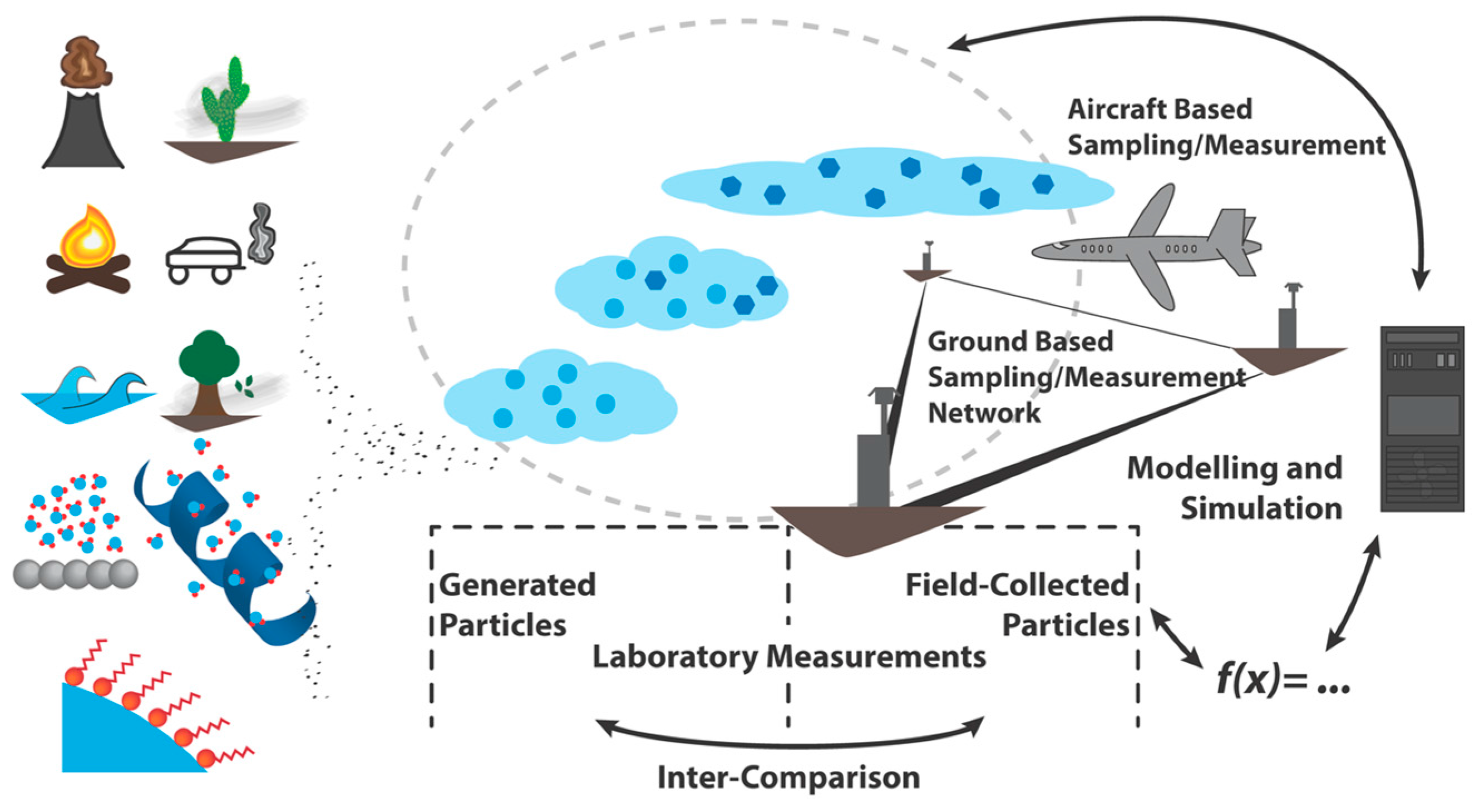