Extension Agrometeorology as the Answer to Stakeholder Realities: Response Farming and the Consequences of Climate Change

We investigate the reasons for the opposite climate change signals in precipitation between the regional climate model REMO and its driving earth system model MPI-ESM over the greater Congo region. Three REMO simulations following three RCP scenarios (RCP 2.6, RCP 4.5 and RCP 8.5) are conducted, and it is found that the opposite signals, with REMO showing a decrease and MPI-ESM an increase in the future precipitation, diverge strongly as we move from a less extreme to a more extreme scenario. It has been shown that REMO simulates a much higher number of extreme rainfall events than MPI-ESM. This results in higher surface runoff and thus less soil infiltration, which leads to lower amounts of soil moisture in REMO. This further leads to less moisture recycling via evapotranspiration, which in turn results in less precipitation over the region. In the presence of a strong radiative forcing, the hydrological cycle becomes less intense in REMO and a downward trend in hydrological variables is observed. Contrary to this, the higher amounts of soil-moisture due to the lack of extreme rainfall events in MPI-ESM enhance the hydrological cycle. In the presence of strong radiative forcing, higher amounts of soil moisture result in increased evapotranspiration which in turn results in the higher amount of precipitation. It is concluded that the land-atmosphere coupling over the Congo region is very sensitive to the change in soil moisture amounts, which is likely to play a major role in global warming conditions. Therefore, adequate and improved representation of soil processes in climate models is essential to study the effects of climate change. However, the better representation of extreme rainfall events in REMO compared to MPI-ESM can be regarded as an added value of the model. View Full-Text
Keywords: REMO; MPI-ESM; extreme rainfall events; hydrological cycle; land-atmosphere coupling REMO; MPI-ESM; extreme rainfall events; hydrological cycle; land-atmosphere coupling
►▼ Show Figures 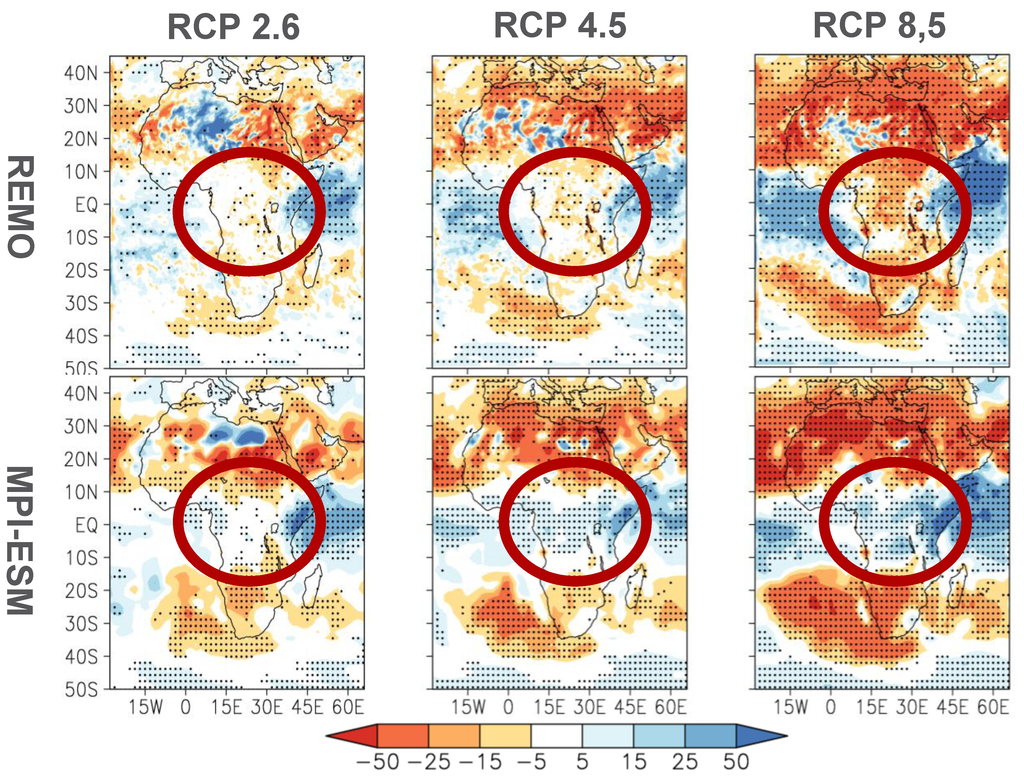