Natural daylight is recognized as an important variable in the energy performance of buildings. A method that estimates the global illuminance received on a horizontal surface at ground level and its direct component at normal incidence under cloudless conditions is presented. The method uses the k-distribution method and the correlated-k approximation to compute a set of clearness indices integrated over 13 spectral bands covering the range 380–780 nm. A spectral resampling technique, including a spectral disaggregation and a spectral linear interpolation, is applied to these indices for providing a detailed set of solar irradiances at 1 nm in spectral resolution over the whole range. Then, these are weighted by the standardized CIE action spectrum for human eye for assessing the illuminance. Inputs to the method include the total column contents of ozone and water vapor as well as aerosol optical properties produced by the Copernicus Atmosphere Monitoring Service. Estimates of illuminance were compared to high-quality 1 min measurements of illuminance that were collected from two experimental sites located in two different climatic zones. A slight overestimation is observed for the global illuminance: the bias is between +1 klx and +3 klx, i.e., between +1% and +4% in relative value. The root mean square error varies between 5 klx (8%) and 6 klx (9%). The squared correlation coefficient ranges between 0.95 and 0.97. At the site providing the direct illuminance at normal incidence, the performance of the method is lower compared to global illuminance with a lower squared correlation coefficient of 0.53. The bias, relative bias, RMSE, and rRMSE are +7 klx, +9%, 12 klx, and 15%, respectively. The uncertainty of the method is of the order of the uncertainty of the measurements. The method offers accurate estimates of illuminance in cloudless conditions at high spatial and temporal resolutions useful for construction industries and operators as well as thermal simulation tools for optimal building design strategies. View Full-Text
Keywords: illuminance; the k-distribution method and the correlated-k approximation; spectral resampling technique; Copernicus Atmosphere Monitoring Service; cloudless conditions; clearness index illuminance; the k-distribution method and the correlated-k approximation; spectral resampling technique; Copernicus Atmosphere Monitoring Service; cloudless conditions; clearness index
►▼ Show Figures 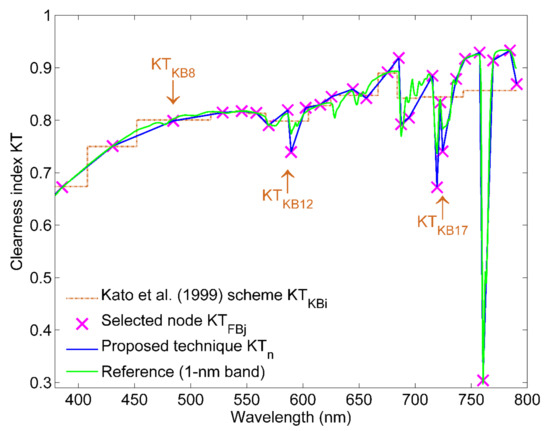