In this study, forecast skill over four different periods of global climate change (1982–1999, 1984–1996, 2000–2018, and 2000–2014) is examined using the hindcasts of five models in the North American Multimodel Ensemble. The deterministic evaluation shows that the forecasting skills of the Niño3.4 and Niño3 indexes are much lower during 2000–2018 than during 1982–1999, indicating that the previously reported decline in forecasting skill continues through 2018. The decreases in skill are most significant for the target months from May to August, especially for medium to long lead times, showing that the forecasts suffer more from the effect of the spring predictability barrier (SPB) post-2000. Relationships between the extratropical Pacific signal and the El Niño-Southern Oscillation (ENSO) weakened after 2000, contributing to a reduction in inherent predictability and skills of ENSO, which may be connected with the forecasting skills decline for medium to long lead times. It is a great challenge to predict ENSO using the memory of the local ocean itself because of the weakening intensity of the warm water volume (WWV) and its relationship with ENSO. These changes lead to a significant decrease in the autocorrelation coefficient of the persistence forecast for short to medium lead months. Moreover, for both the Niño3.4 and Niño3 indexes, after 2000, the models tend to further underestimate the sea surface temperature anomalies (SSTAs) in the El Niño developing year but overestimate them in the decaying year. For the probabilistic forecast, the skills post-2000 are also generally lower than pre-2000 in the tropical Pacific, and in particular, they decayed east of 120° W after 2000. Thus, the advantages of different methods, such as dynamic modeling, statistical methods, and machine learning methods, should be integrated to obtain the best applicability to ENSO forecasts and to deal with the current low forecasting skill phenomenon. View Full-Text
Keywords: forecast skill change; multimodel ensemble; SSTA variability; extratropical forecast skill change; multimodel ensemble; SSTA variability; extratropical
►▼ Show Figures 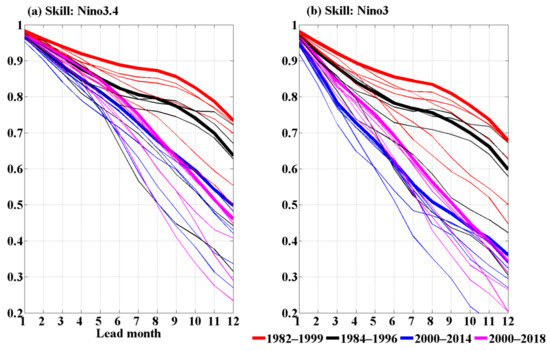