Observations of Emissions and the Influence of Meteorological Conditions during Wildfires: A Case Study in the USA, Brazil, and Australia during the 2018/19 Period

Atmospheric new particle formation (NPF) events taking place over large distances between locations, featuring similar characteristics, have been the focus of studies during the last decade. The exact mechanism which triggers NPF still remains indefinable, so are the circumstances under which simultaneous occurrence of such events take place in different environments, let alone in environments which are parted by over 1200 km. In this study, concurrent number size distribution measurements were conducted in the urban environments of Athens (Greece) and Amman (Jordan) as well as the regional background site of Finokalia, Crete, all located within a distance of almost 1300 km for a 6-month period (February–July 2017). During the study period Athens and Finokalia had similar occurrence of NPF (around 20%), while the occurrence in Amman was double. When focusing on the dynamic characteristics at each site, it occurs that formation and growth rates at Amman are similar to those at Finokalia, while lower values in Athens can be ascribed to a higher pre-existing particle number at this urban site. By comparing common NPF events there are 5 concomitant days between all three sites, highly related to air masses origin. Additionally, for another 19 days NPF takes place simultaneously between Finokalia and Amman, which also share common meteorological characteristics, adding to a total of 60% out of 41 NPF events observed at Finokalia, also simultaneously occurring in Amman. View Full-Text
Keywords: NPF; Eastern Mediterranean; particle number size distributions; concurrent regional events NPF; Eastern Mediterranean; particle number size distributions; concurrent regional events
►▼ Show Figures 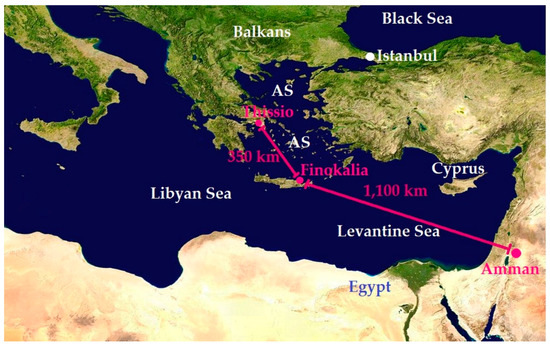