(1) Background: In agro-ecosystems, the success of the crops has a strong connection to biodiversity in the landscape. In the face of climate change, it is important to understand the response to environmental variation of weed species by means of their distribution. In the last century, biodiversity has been impacted due to a variety of stresses related to climate change. Although the composition of vegetation tends to change at a slower rate than climate change, we hypothesize species present in weed communities are distributed in diverse patterns as a response to the climate. Therefore, the general aim of this paper is to investigate the effect of temperature, using latitude as an indicator, on the composition and distribution of weed communities in agro-ecosystems. (2) Methods: Weeds were monitored in georeferenced cereal fields which spanned south and central Spanish regions. The graphic representation according to latitude allowed us to identify groups of weeds and associate them to a temperature range. We classified weeds as generalist, regional, or local according to the range of distribution. (3) Results: The monitoring of species led to the classification of weeds as generalist, regional or local species according to latitude and associated temperature ranges. Three weed species that were present in all latitude/temperature regions, were classified as generalist (Linaria micrantha (Cav) Hoffmanns & Link, Sonchus oleraceous L., and Sysimbrium irium L.). The species were classified as regional or local when their presence was limited to restricted latitude/temperature ranges. One weed, Stellaria media (L.) Vill., was considered a local species and its distribution dynamics can be considered an indicator of temperature. (4) Conclusions: The novel methodology used in this study to assign weed distribution as an indicator of climatic conditions could be applied to evaluate climate gradients around the world. View Full-Text
Keywords: agro-ecosystems; biodiversity; climate change; weed communities agro-ecosystems; biodiversity; climate change; weed communities
►▼ Show Figures 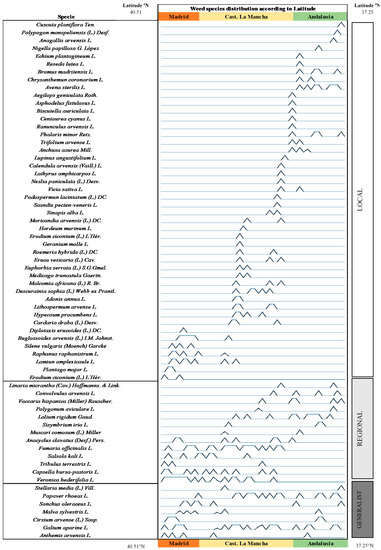