Relationships between Low-Level Jet and Low Visibility Associated with Precipitation, Air Pollution, and Fog in Tianjin

This study explored the spatio-temporal patterns of meteorological drought change and the mechanisms of drought occurrence in Yulin City of the northern Shaanxi by using Standardized Precipitation Index (SPI), Empirical Orthogonal Function (EOF) analysis and composite analysis based on the meteorological observation data and NCEP/NCAR reanalysis data from 1961 to 2015. The main findings of the research are as follows: (1) In the annual and seasonal drought series, there is a non-significant trend toward drought in summer, while there are non-significant trends toward wetness for the other series. Overall, the frequency of drought is low in the southeast and high in the west and the north of the study area. (2) EOF1 is characterized by a uniform pattern in the whole region, i.e., there is a feature of consistent drought or flood in Yulin City. EOF2, EOF3 and EOF4 mainly indicate opposite characteristics of the changes of floods and droughts in the eastern/western parts and the southeast/other parts in the study area. (3) In the summer of the typical drought (flood) years, the study area is controlled by the northwest airflow behind the trough (zonal airflow at the bottom of low-pressure trough), and the meridional circulation (zonal circulation) is distributed in the mid-latitudes, which is conducive to the intrusion of cold air into the south (north) of China. The cold and warm air intersection area is to the south (to the north). The water vapor flux is weak (strong) and the water vapor divergence (convergence) prohibits (enhances) the precipitation process in the study area. View Full-Text
Keywords: meteorological drought; spatio-temporal pattern; circulation characteristics; northern Shaanxi; standardized precipitation index meteorological drought; spatio-temporal pattern; circulation characteristics; northern Shaanxi; standardized precipitation index
►▼ Show Figures 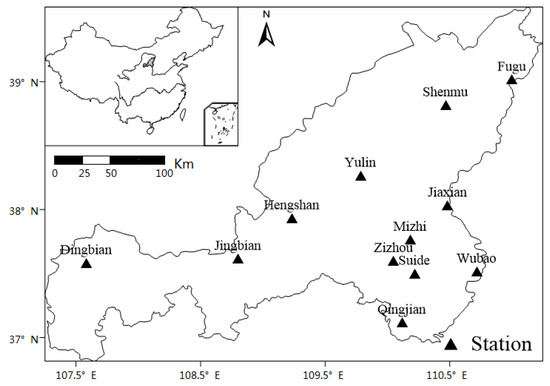