Impact of Desert Dust on Air Quality: What is the Meaningfulness of Daily PM Standards in Regions Close to the Sources? The Example of Southern Tunisia

It is well known that air pollution has many adverse effects on health [1,2], and recent research suggests substantially higher health impacts than previously assumed, with a near doubling of the global mortality rate attributable to ambient air pollution to 8.8 million [3]. Air pollution has been classified as the biggest environmental risk to health [4], and a recent review highlights how children are uniquely vulnerable to air pollution due to physiological, behavioural, and environmental factors and how exposure to air pollution in early years can lead to a life-long health burden [5]. The World Health Organisation (WHO) sets Air-Quality Guidelines (AQGs) for particulate matter (PM and PM), sulphur dioxide (SO), nitrogen dioxide (NO), and ozone (O) [6]. Globally, 91% of the world’s population and 93% of children live in environments with air-pollution levels exceeding the WHO guidelines [4,7].
Desert dust outbreaks contribute directly to air pollution by increasing particulate matter concentrations, often by orders of magnitude [8,9,10]. Airborne desert dust impacts air quality on both local and global scales as dust can be transported thousands of km in the atmosphere [11]; airborne desert dust also has impacts on climate and biogeochemistry [8]. The most active global dust source regions are located in a broad band or “dust belt” extending from the west coast of North Africa through the Middle East to central Asia [9]. North Africa alone accounts for 55% of global dust emissions while North Africa, the Middle East, and Asia together account for ∼87% of global emissions [9].
The health effects of desert dust are more uncertain than those of, for example, carbonaceous particulate matter, as most of the epidemiological studies of health effects of air pollution have been conducted in urban areas dominated by anthropogenic particles [11,12]. However, various studies have found associations between mortality and coarse particles and/or PM during dust outbreaks in urban areas [13,14,15,16]. Recent studies in Tenerife found that exposure to Saharan dust may be a precipitating factor of hospital admision due to heart failure [17], while a study in the capital cities of both Tenerife and Gran Canaria (Canary Islands) found that fine and coarse particles and NO were associated with an increased risk of emergency hospital admission for respiratory diseases [18]. The processes involved in the adverse health effects of desert dust outbreaks are still being investigated. Desert dust has been shown to be mixed with particulate pollutants as the dust plume encounters polluted air masses, for example, on its way from North Africa to the Western Mediterranean [19] and as it travels westward from North Africa to the North Atlantic [20]. The results of a study in two regions of contrasting African influence found that the mechanism of pollution scavenging by dust was more effective in the wet mode at sites further away from the desert dust source [19].
In addition to direct health effects of desert dust and the increasing particulate concentrations from transport of desert dust, recent studies have indicated there are also indirect health effects of dust outbreaks. For example, the adverse health effects or toxicity of the locally produced particulate matter was also found to increase during dust outbreaks [21]. Studies in southern Europe (Barcelona and Madrid, Spain) have found that the mixing layer height significantly decreased with increasing intensity of Saharan dust events [22,23] and that an increased risk of mortality was observed with the reduction in mixing layer height [22]. This thinning of the mixing layer leads to an accumulation of local anthropogenic pollutants and may favour new particle formation or new species formed from condensation of gaseous precursors on the surface of dust particles [22,24]. A study of PM chemical composition in Seville (Spain) reported that, as well as the expected natural PM load increase during Saharan dust outbreaks, the anthropogenic load also increased to twice the concentration observed in non-dust outbreak days [25].
One of the challenges of investigating the health effect of dust outbreaks is having adequate air-quality observations in dust outbreak regions [11,16,26]. In this study, we use air-quality observations from Santa Cruz de Tenerife (Canary Islands, Spain) as an illustrative case of a city located close to Saharan dust sources. The proximity of Santa Cruz de Tenerife to the west coast of North Africa (∼300 km) in the desert dust export pathway to the North Atlantic (Figure 1) causes it to be frequently subjected to dust outbreaks, which increase the particulate concentrations and affect the air quality. This desert dust export from western Africa to the North Atlantic establishes a dry, warm, and dust-laden air layer that is referred to as the Saharan Air Layer (SAL), which can expand westward to the Americas [27,28,29,30]. In winter and early spring, the Saharan Air Layer intrusions over the North Atlantic occur at low altitude (0–3 km) [29,31,32], while in summer, the SAL and dust transport occurs at higher altitudes (1–5 km) [29,33]. However, although the dust transport largely take place at altitude in the summer, the impact on concentrations at lower altitudes can occur through gravitational settlement of the dust [34].
Santa Cruz de Tenerife is a medium-size coastal city, and in addition to the impact of desert dust particles, it has a mixture of anthropogenic sources of pollutants. Here, we combine air-quality observations and data of the vertical structure of the atmosphere from 2012 to 2017, obtained from both observations and a numerical weather prediction model, to investigate the direct and indirect influence of desert dust outbreaks on air quality in urban areas.

Santa Cruz de Tenerife is the capital city of Tenerife (Canary Islands) and has 203,700 inhabitants. It is a coastal city of complex topography, boarded by the Anaga peninsula to the NE (1024 m a.s.l.) and built on a slope ranging up to 624 m a.s.l. in the NW direction (Figure A1). It has a mixture of anthropogenic sources of pollutants (both on-road and maritime traffic and industrial emissions from an oil refinery) [35,36,37]. In 2014, the Santa Cruz de Tenerife refinery ceased crude oil refining operations; however, some industrial activity (water vapour production) continues at the refinery. A strong and stable temperature inversion layer is present for most of the year in the Canary Islands and in Tenerife due to quasi-permanent subsidence conditions in the dry free troposphere (FT) coupled with frequent humid trade winds flow in the marine boundary layer (MBL) [38].

Dust outbreaks have a direct effect on air quality by increasing the particulate concentrations. Although dust outbreaks contribute more in mass percentage terms to the particulate coarse mode fraction (PM), they do also increase the particulate fine fraction (PM). We compared daily (24-h mean) PM and PM concentrations at the three urban measurement sites in Tenerife for 2012–2017 with the record of desert dust outbreaks affecting the Canary Islands for the same period. Data for 2015 illustrates how all episodes of increased PM and PM concentrations and all the exceedances of the WHO 24-h mean PM (50 g m) and PM (25 g m) Air-Quality Guideline occur during dust outbreak days (Figure 2a,b). On average, 38% of days during 2012 to 2017 were affected by dust outbreaks, with a maximum of 55% of days (201 days) in 2017. To assess the indirect influence of desert dust outbreaks on air quality in urban areas, we use data of the marine BLH obtained from radiosonde observations and from a numerical weather prediction model (see Section 2.3 for more details). We see that that, during dust outbreak days, the BLH generally decreases (Figure 2c). Further analysis on this thinning of the marine boundary layer during dust outbreak days is conducted in Section 3.3.

3.4. Increase of Particulate and Gaseous Pollutants during Dust Outbreaks

C.M. designed the study, analysed the data, and wrote the manuscript. E.C., C.L.M., V.G., S.R. and C.T. contributed to interpretation of the data. V.G. provided air-quality data, while C.L.M., J.J.B. and P.M.R.-C. obtained and analysed meteorological data. All authors have read and agreed to the published version of the manuscript.

The authors would like to thank the Canary Islands Government for data from their Air-Quality Monitoring Network. This activity has been undertaken in the framework of the World Meteorological Organisation Global Atmosphere Watch Urban Research Meteorology and Environment (GURME) project. Analyses and visualizations of MERRA-2 data used in this paper were produced with the Giovanni online data system and developed and maintained by the NASA GES DISC at http://disc.sci.gsfc.nasa.gov/giovanni. We would also like to thank E. Nemitz for his comments on the manuscript. In addition, we wish to thank the Spanish Ministry for the Ecological Transition (MITECO) for data provided as a result of the collaboration agreement for the study and evaluation of air pollution by suspended particulate matter in Spain between MITECO and the Spanish National Research Council (CSIC). 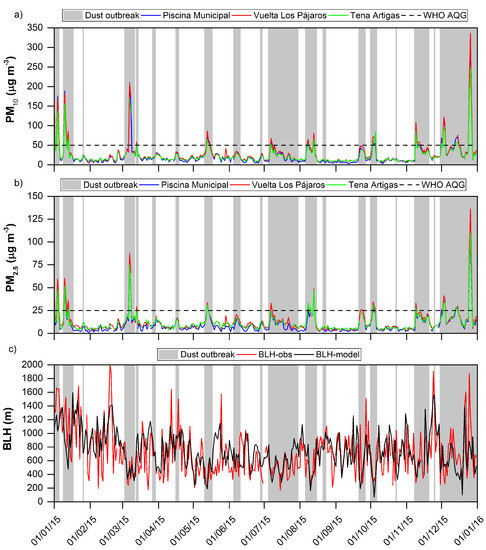 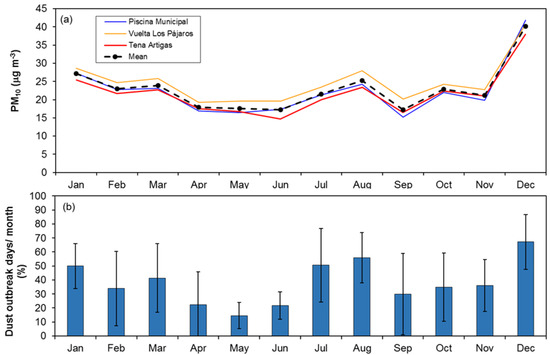 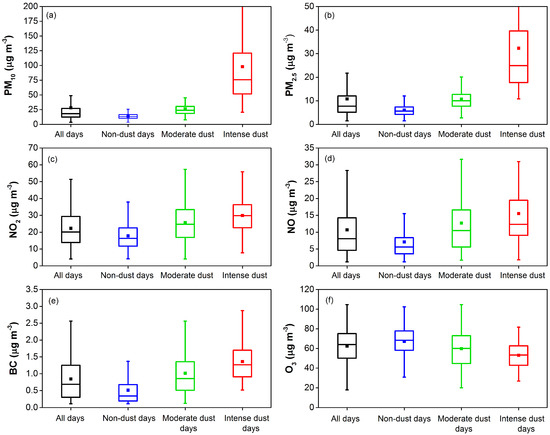 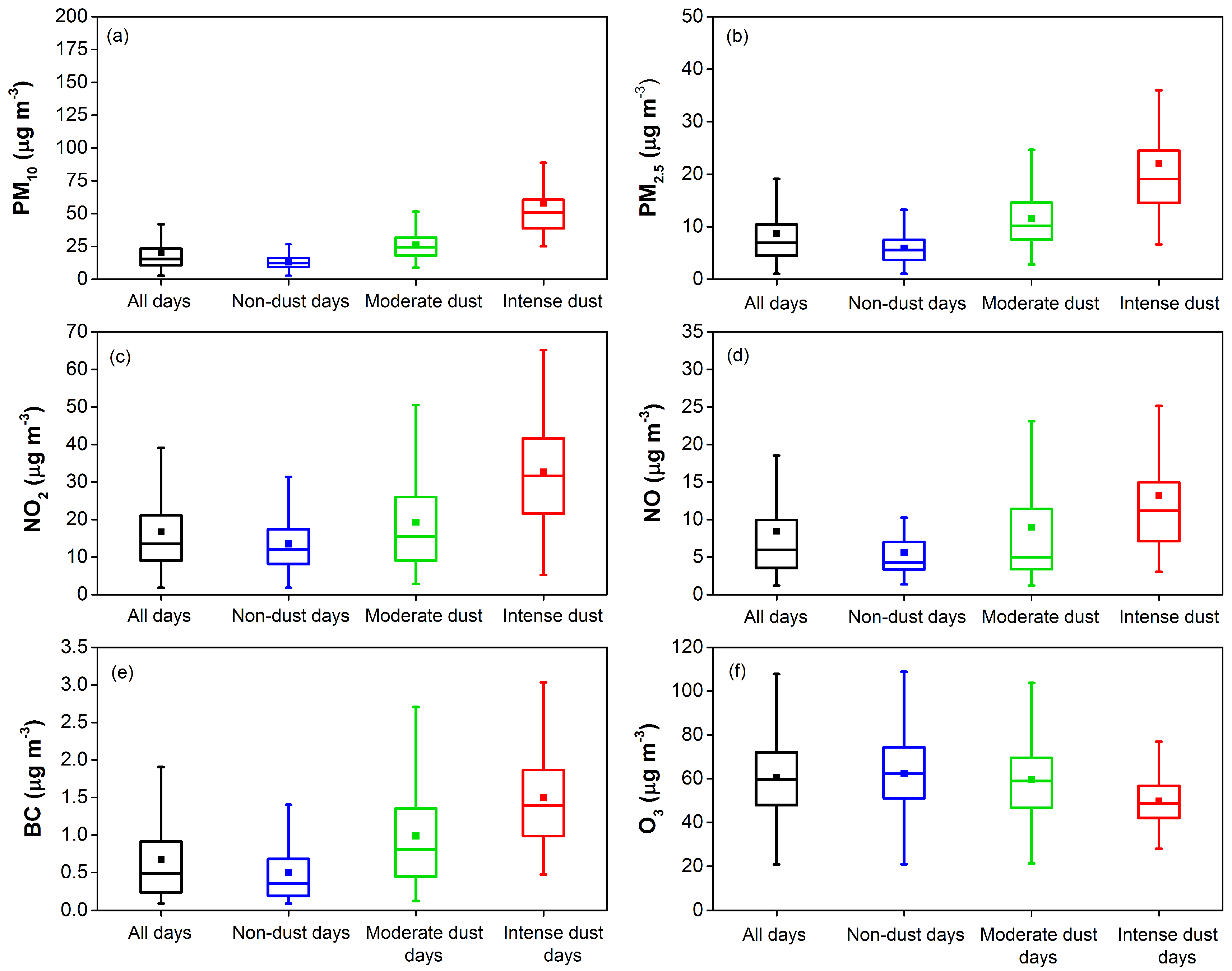