Evaluation of the Sea-Ice Simulation in the Upgraded Version of the Coupled Regional Atmosphere-Ocean- Sea Ice Model HIRHAM–NAOSIM 2.0
Previous Article in Special Issue

Analysis of a Mediterranean Tropical-Like Cyclone. Sensitivity to WRF Parameterizations and Horizontal Resolution

The dominant large-scale interannual modes in the tropical Pacific and Indian Oceans—El Niño southern oscillation (ENSO) and the Indian Ocean Dipole (IOD)—dominate seasonal rainfall patterns in Ethiopia. However, there is a clear interaction between ENSO and the IOD, and it is unclear whether the IOD has an independent influence on seasonal monsoon patterns in Northern Ethiopia. We use monthly rainfall records from 15 stations from two drought–prone regions in Northern Ethiopia (Afar and Amhara) for the period 1966–2006 to explore relationships between rainfall and circulation patterns and sea surface temperature (SST) anomalies over the tropical Indo-Pacific region. Our analysis confirms that regional summer monsoon (Kiremt) rainfalls in these regions are predominantly modulated by ENSO. Warm and cold ENSO episodes (El Niño/La Nina) are associated with below and above average summer monsoon rainfall, respectively. Lagged relationship between the IOD and Kiremt rainfall shows that positive/negative phases of the IOD are generally conducive to Kiremt rainfall increases/decreases over large parts of Ethiopia. Regression models based on the large-scale circulation indices NINO3.4 and a Dipole Mode Index (DMI)NO-ENSO representing the “ENSO-free IOD” also highlight the role of ENSO. However, the relative-weights for the models with DMINO-ENSO, calculated using Akaike Information Criteria (AIC), were 1.5 and 1.1 times the weights for the ENSO only models for the Afar and Amhara regions, respectively. This suggests that the IOD has an independent regional influence. This is in line with the conception of the IOD as a unique coupled-mode in the tropics, and may have important implications in boosting seasonal forecasting skills in the regions. No statistically significant trends were found in the regional and modeled rainfall time-series. View Full-Text
Keywords: ENSO-free IOD; IOD; ENSO; monsoon ENSO-free IOD; IOD; ENSO; monsoon
►▼ Show Figures 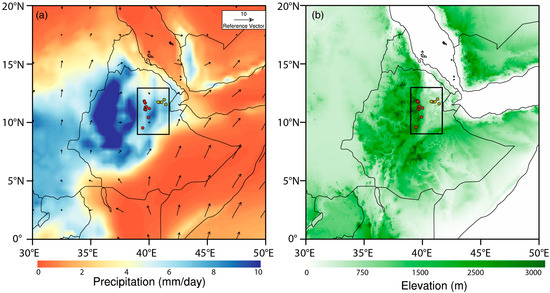