Analysis of a Severe PM2.5 Episode in the Seoul Metropolitan Area in South Korea from 27 February to 7 March 2019: Focused on Estimation of Domestic and Foreign Contribution

Influence of the Anthropogenic Fugitive, Combustion, and Industrial Dust on Winter Air Quality in East Asia

We estimate the effects of the anthropogenic fugitive, combustion, and industrial dust (AFCID) on winter air quality in China and South Korea for November 2015–March 2016 using the Comprehensive Regional Emissions inventory for Atmospheric Transport Experiment (KU-CREATE) monthly anthropogenic emission inventory in conjunction with a nested version of GEOS-Chem. Including AFCID emissions in models results in a better agreement with observations and a reduced normalized mean bias of −28% compared to −40% without AFCID. Furthermore, we find that AFCID amounts to winter PM10 concentrations of 17.9 μg m−3 (17%) in eastern China (30−40° N, 112−120° E) with the largest contribution of AFCID to winter PM10 concentrations of up to 45 μg m−3 occurring in eastern China causing a significant impact on air quality to downwind regions. Including AFCID in the model results in an increase of simulated winter PM10 concentrations in South Korea by 3.1 μg m−3 (9%), of which transboundary transport from China accounts for more than 70% of this increased PM10 concentration. Our results indicate that AFCID is an essential factor for winter PM10 concentrations over East Asia and its sources and physical characteristics need to be better quantified to improve PM air quality forecasts.
Keywords: aerosol; anthropogenic dust; PM10; East Asia aerosol; anthropogenic dust; PM10; East Asia

Severe environmental pollution due to rapid economic growth, industrialization, and urbanization has become a social problem in East Asia. Among the environmental problems being faced by East Asia, air quality degradation caused by severe haze is a primary concern not only in China but also in neighboring countries directly affected by transboundary transport from China [1,2]. Aerosols also affect human health by increasing the risk of cardiovascular and respiratory diseases [3,4]. Cohen et al. [5] reported that lung cancer and cardiovascular disease ranked fifth among global risk factors due to aerosol exposure.
In recent years, aerosol concentrations have decreased in East Asia due to intense regulatory policies [6,7,8,9]; however, East Asia still has high aerosol concentrations compared to other regions. In winter, severe air pollution events frequently occur due to unfavorable weather conditions and excessive use of heating energy. Recent studies report that stagnant weather conditions in winter play an important role in severe haze events and are generally characterized by weak wind speed, low boundary layer height, strong temperature inversion, and high relative humidity [10,11,12].
Air quality modeling is a powerful tool for understanding the physical and chemical processes that affect air pollution. Global and regional models estimate aerosol concentrations comprising carbonaceous, inorganic ions, mineral dust, and sea salt [13,14], with the first two components mainly contributed by human activity and the latter two assumed to be caused naturally by wind from the arid desert and ocean. In addition to these components, recent emission studies suggest that anthropogenic fugitive, combustion, and industrial dust (AFCID) are also major sources for aerosol concentrations in urban areas [15,16,17,18]. Zheng et al. [15] suggest that the total amounts of AFCID emissions in China are higher than the sum of black carbon (BC) and organic carbon (OC) emissions. Nevertheless, only a few global and regional chemical transport models include AFCID emissions in aerosol simulations [19,20,21].
The primary sources of AFCID are coal burning and industrial processes (e.g., steel and cement production), refurbishing paved and unpaved roads, mining, quarrying, and agricultural operations [22]. Previous global modeling work by Philip et al. [19] suggests that AFCID increases annual mean PM2.5 concentrations by 2–16 μg m−3 and reduces bias by 10% in East and South Asia. Since global models tend to underestimate aerosol loadings, including missing AFCID sources in the models will not only reduce the bias but also more accurately estimate the effects of aerosols on air quality and human health. To better understand this relationship, we use a nested version of the GEOS-Chem along with the latest AFCID emission inventory to quantify the impact of AFCID on winter aerosol concentrations in East Asia.

We performed aerosol simulations in East Asia from October 2015 to March 2016 using a GEOS-Chem (version 12.1.0) 3-D global chemical transport model driven by Goddard Earth Observing System–Forward Processing (GEOS-FP) assimilated meteorological fields. GEOS-FP provides meteorological data such as temperature, wind, humidity, boundary layer height, and other variables in a horizontal grid of 0.25° × 0.3125°.
The model includes a fully coupled tropospheric chemistry with five anthropogenic aerosols: BC, OC, ammonium, sulfate, and nitrate [23,24]. The model also includes two wind-generated natural aerosols: soil dust, and sea salt [25,26]. The standard GEOS-Chem model classifies natural mineral dust in four size bins of diameters 0.2–2.0, 2.0–3.6, 3.6–6.0, and 6.0–12.0 μm. AFCID is estimated to be within a diameter of 2.0 μm and therefore, belongs in the smallest bin, and the characteristics of aerosol produced by AFCID are considered the same as the dust species.
The BC and OC simulations are based on the methods detailed by Park et al. [23] with the hydrophobic component becoming hydrophilic with an e-folding time of 1.15 days. We use a simple secondary organic aerosol (SOA) scheme that assumes irreversible uptake as the mechanism of SOA formation. This scheme includes two SOA-related tracers of SOA precursor (SOAP) and particle-phase (SOAS). The SOAP is directly emitted proportionally to anthropogenic and biomass burning of CO with ratios of 0.069 and 0.013 (g CO emitted)−1, respectively [27,28]. Biogenic SOA forms from monoterpene and isoprene in yields of 5% and 1.5%, respectively. Secondary inorganic aerosols of ammonium, sulfate, and nitrate are calculated using ISORROPIA II, which takes into account H2SO4-HNO3-NH3-H2O thermodynamic equilibrium [29]. The GEOS-Chem uses the dust entrainment and deposition (DEAD) scheme developed by Zender et al. [30], which employs the source function used in the Goddard Chemistry Aerosol Radiation and Transport (GOCART) model [31,32]. Sea salt is produced as a function of local 10 m wind speeds, dry particle sizes, and sea surface temperatures [25,33]. In GEOS-Chem, the removal of all aerosol species in the atmosphere occur through dry deposition processes such as gravity sedimentation and turbulent dry transfer to the surface [34]. The model also includes wet deposition processes of washout/rainout in large-scale precipitation and convective updraft scavenging [35].
The anthropogenic emissions of BC, OC, SO2, NOX, NH3, VOCs, and AFCID in East Asia are sourced from the Comprehensive Regional Emissions inventory for Atmospheric Transport Experiment (KU-CREATE v4.7) [36,37], which was developed for air quality modeling and analysis in Asia. KU-CREATE inventory is created by using the highly compatible Greenhouse Gas and Air Pollution Interactions and Synergies (GAINS)-Asia framework. Based on up-to-date statistics, the KU-CREATE inventory considers emission activity, emission factors, and abatement efficiencies from a bottom-up emission inventory. Recently, it was provided as an emission inventory for Korea–United States Air Quality (KORUS-AQ; https://www-air.larc.nasa.gov/missions/korus-aq/) field campaign.
The annual AFCID emissions in East Asia (20–50° N, 100–140° E) for 2015 and 2016 are 5.8 Tg year−1 and 5.2 Tg year−1, respectively. Figure 1a,b shows the annual AFCID emissions for 2015 and 2016 from the KU-CREATE inventory indicating high AFCID emissions occurring in eastern China. Values are up to 50% higher in winter than summer due to heating related sources (Figure 1c). It is also noteworthy that AFCID emissions are reduced by 10% in 2016 compared to 2015 due to regulations enacted in China.
Biomass burning emissions are sourced from the Global Fire Emission Database version 4 (GFED4) inventory [38] with 0.25° × 0.25° spatial resolution and the daily time resolution. For biogenic emissions, we use the Model of Emissions of Gases and Aerosols from Nature (MEGAN v2.1) inventory [39] as implemented in GEOS-Chem by Hu et al. [40].
We evaluate the model using observed hourly PM2.5 and PM10 concentrations in surface air collected from the China National Environmental Monitoring Center (CNEMC; http://www.pm25.in) and the Korean Ministry of Environment (MOE; http://www.airkorea.or.kr). Since we obtained the Chinese data in 2016, model evaluation was performed only from January to March 2016. Furthermore, for efficient comparison between the model and observations, we re-gridded the observations to fit the model horizontal grid.
We conducted two six months simulations: a baseline simulation with no AFCID emissions and a sensitivity simulation with AFCID emissions. The first month is used to spin up the model. We quantify AFCID contributions and aerosol concentrations in East Asia using the difference between the baseline and sensitivity simulations. We also conducted two additional sensitivity simulations by zeroing out AFCID emissions in China and AFCID emissions in both China and South Korea, respectively. The differences between the simulation with AFCID emissions and each sensitivity simulation yields the contributions from China, the rest of the world, and South Korea, respectively, to PM2.5 concentrations in South Korea.

3.1. Impacts of AFCID on PM10 Concentrations

In order to clearly estimate the effects of aerosols on air quality and human health, it is important to completely understand the major sources. In this study, we used a nested version of GEOS-Chem and the latest AFCID emissions to estimate the impacts of AFCID on winter air quality in East Asia for November 2015–March 2016. First, we evaluated the model with and without AFCID emissions by comparing against observed PM10 concentrations in surface air in China and South Korea. The results indicate that AFCID reduced the bias of model surface PM10 concentration from −40% to −28%. We found that AFCID increased the winter PM10 concentrations in eastern China by 17.9 μg m−3 (17%) and up to 45 μg m−3 (36%). AFCID also increased the PM10 concentrations in South Korea by 3.1 μg m−3 (8.9%), of which 2.3 μg m−3 (6.7%) was contributed by China while 0.6 μg m−3 (1.5%) was contributed by local sources in South Korea. These results imply that AFCID emitted from China has a significant impact not only on China but also on the downwind regions. Our findings indicate that the aerosol concentration increased by AFCID is higher than that in a previous study [19], which means that AFCID plays an essential role in winter air quality. We further suggest that global and regional chemical transport models should include AFCID emissions in aerosol simulations.
Although AFCID improves the simulated PM10 concentrations in winter in East Asia, there is still a gap between observed and modeled PM2.5 and PM10 concentrations. In this regard, we suggest that the overestimation of model PM2.5 concentrations may contribute to coarse-mode nitrate and OC aerosols. Moreover, AFCID size distribution and emissions in coarse-mode will improve the simulated PM2.5 and PM10 concentrations. Therefore, it is necessary to better quantify the source and physical properties of AFCID to improve PM air quality forecasts.

The authors are grateful to two anonymous reviewers for their valuable comments. 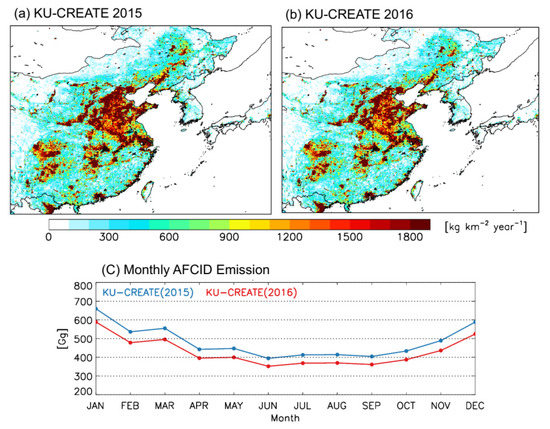 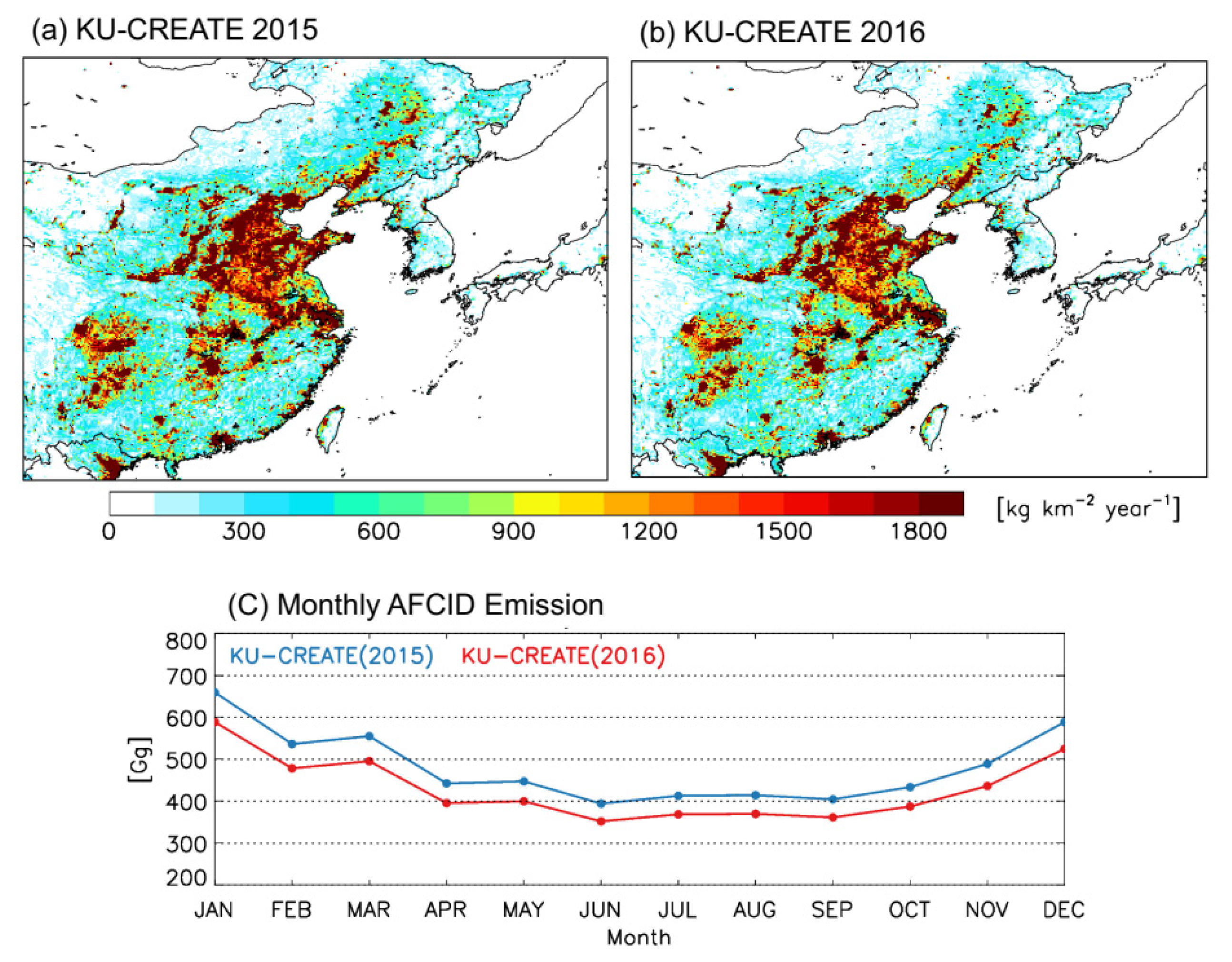 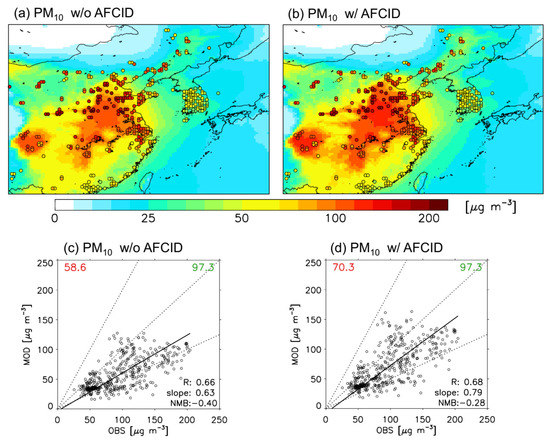 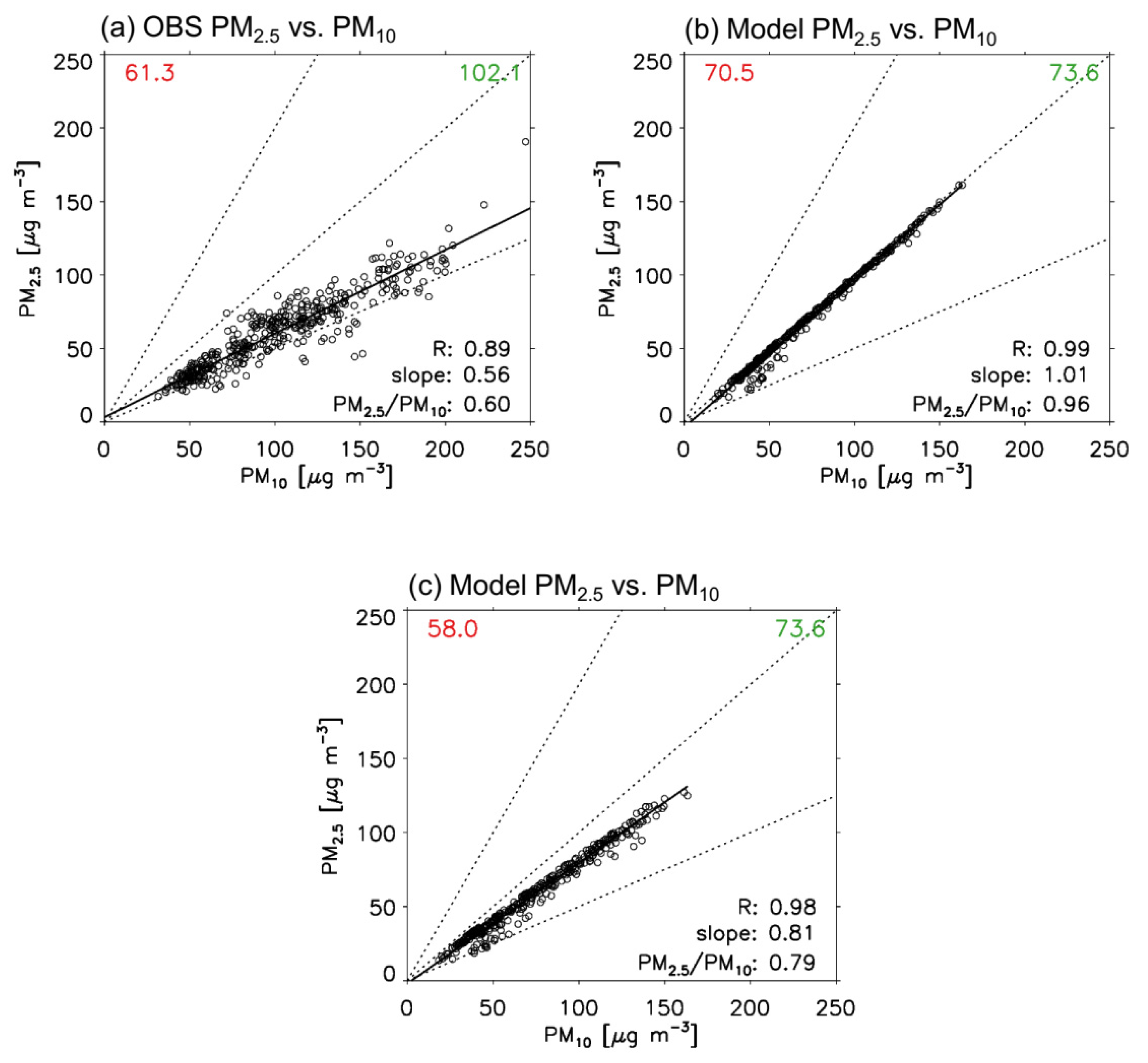