Characteristics of PM2.5 at a High-Altitude Remote Site in the Southeastern Margin of the Tibetan Plateau in Premonsoon Season
Previous Article in Journal

Weather research models have been used to investigate the sensitivity of simulations of Typhoon Tembin (1214) to changes in three horizontal grid spacings and the effect of the cold wake generated by Typhoon Bolaven (1215). We used modified sea surface temperature (SST) to simulate Tembin as it approached after Bolaven had passed through the Ieodo Ocean Research Station and the Yellow Sea buoy in Korea. In the tropical cyclone (TC) tracking experiments, a higher resolution showed the faster and more eastward movement of TCs in all SST conditions. TCs tend to move more eastward at all resolutions particularly when there is a cold wake in their western regions. When there is no cold wake, the intensity of TC is very sensitive to the resolution of the experiment. If a cold wake is maintained on the western and eastern sides, TC intensity is less sensitive to differences in resolution. The precipitation from TCs in the cold wake of the eastern (western) region is lower (higher) than when there is no wake. The TC-generated cold wake significantly affects intensity and movement in cold wake cases in the western region, regardless of horizontal grid, for various reasons. View Full-Text
Keywords: cold wake; potential vorticity; tropical cyclone; typhoon; horizontal grid; potential vorticity tendency cold wake; potential vorticity; tropical cyclone; typhoon; horizontal grid; potential vorticity tendency
►▼ Show Figures 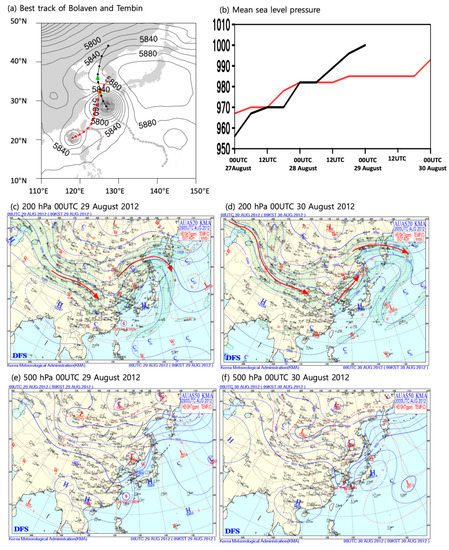 
Moon, Mincheol; Ha, Kyung-Ja. 2019. "Effect of Typhoon-Generated Cold Wake on the Subsequent Typhoon Tembin and Its Sensitivity to Horizontal Resolutions." Atmosphere 10, no. 11: 644.