CoreProbe: A Novel Algorithm for Estimating Relative Abundance Based on Metagenomic Reads
Previous Article in Journal

There are differences in number and localization of nucleolus organizer regions (NORs) in genomes. In mammalian genomes, NORs are located on autosomes, which are often situated on short arms of acrocentric chromosomes and more rarely in telomeric, pericentromeric, or interstitial regions. In this work, we report the unique case of active NORs located on gonоsomes of a eutherian mammal, the Javan mouse-deer (Tragulus javanicus). We have investigated the position of NORs by FISH experiments with ribosomal DNA (rDNA) sequences (18S, 5.8S, and 28S) and show the presence of a single NOR site on the X and Y chromosomes. The NOR is localized interstitially on the p-arm of the X chromosome in close proximity with prominent C-positive heterochromatin blocks and in the pericentromeric area of mostly heterochromatic Y. The NOR sites are active on both the X and Y chromosomes in the studied individual and surrounded by GC enriched heterochromatin. We hypothesize that the surrounding heterochromatin might have played a role in the transfer of NORs from autosomes to sex chromosomes during the karyotype evolution of the Javan mouse-deer. View Full-Text
Keywords: karyotype; chromosome evolution; genome; chevrotain; sex chromosomes; ribosomal DNA karyotype; chromosome evolution; genome; chevrotain; sex chromosomes; ribosomal DNA
►▼ Show Figures 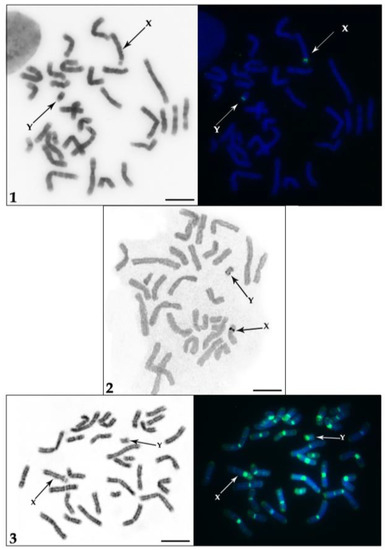