Size and Content of the Sex-Determining Region of the Y Chromosome in Dioecious Mercurialis annua, a Plant with Homomorphic Sex Chromosomes

Sex Chromosomes of the Iconic Moth Abraxas grossulariata (Lepidoptera, Geometridae) and Its Congener A. sylvata

The magpie moth, Abraxas grossulariata, is an iconic species in which female heterogamety was discovered at the beginning of the 20th century. However, the sex chromosomes of this species have not yet been cytologically identified. We describe the sex chromosomes of A. grossulariata and its congener, A. sylvata. Although these species split only around 9.5 million years ago, and both species have the expected WZ/ZZ chromosomal system of sex determination and their sex chromosomes share the major ribosomal DNA (rDNA) representing the nucleolar organizer region (NOR), we found major differences between their karyotypes, including between their sex chromosomes. The species differ in chromosome number, which is 2n = 56 in A. grossularita and 2n = 58 in A. sylvata. In addition, A. grossularita autosomes exhibit massive autosomal blocks of heterochromatin, which is a very rare phenomenon in Lepidoptera, whereas the autosomes of A. sylvata are completely devoid of distinct heterochromatin. Their W chromosomes differ greatly. Although they are largely composed of female-specific DNA sequences, as shown by comparative genomic hybridization, cross-species W-chromosome painting revealed considerable sequence differences between them. The results suggest a relatively rapid molecular divergence of Abraxas W chromosomes by the independent spreading of female-specific repetitive sequences. View Full-Text
Keywords: Abraxas; chromosome painting; comparative genomic hybridization; female heterogamety; heterochromatin; molecular divergence dating; ribosomal DNA (rDNA) Abraxas; chromosome painting; comparative genomic hybridization; female heterogamety; heterochromatin; molecular divergence dating; ribosomal DNA (rDNA)
►▼ Show Figures 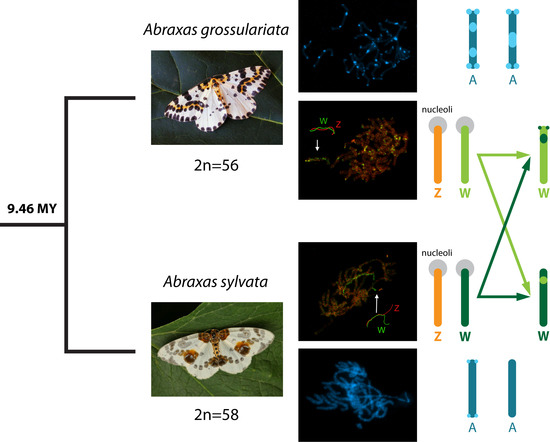