The Unforeseen Non-Coding RNAs in Head and Neck Cancer

Previously ignored non-coding RNAs (ncRNAs) have become the subject of many studies. However, there is an imbalance in the amount of consideration that ncRNAs are receiving. Some transcripts such as microRNAs (miRNAs) or small interfering RNAs (siRNAs) have gained much attention, but it is necessary to investigate other “pieces of the RNA puzzle”. These can offer a more complete view over normal and pathological cell behavior. The other ncRNA species are less studied, either due to their recent discovery, such as stable intronic sequence RNA (sisRNA), YRNA, miRNA-offset RNAs (moRNA), telomerase RNA component (TERC), natural antisense transcript (NAT), transcribed ultraconserved regions (T-UCR), and pseudogene transcript, or because they are still largely seen as non-coding transcripts with no relevance to pathogenesis. Moreover, some are still considered housekeeping RNAs, for instance small nucleolar RNAs (snoRNAs) and TERC. Our review summarizes the biogenesis, mechanism of action and potential role of less known ncRNAs in head and neck cancer, with a particular focus on the installment and progress for this particular cancer type. View Full-Text
Keywords: head and neck cancer; rare non-coding RNAs; biological mechanisms head and neck cancer; rare non-coding RNAs; biological mechanisms
►▼ Show Figures 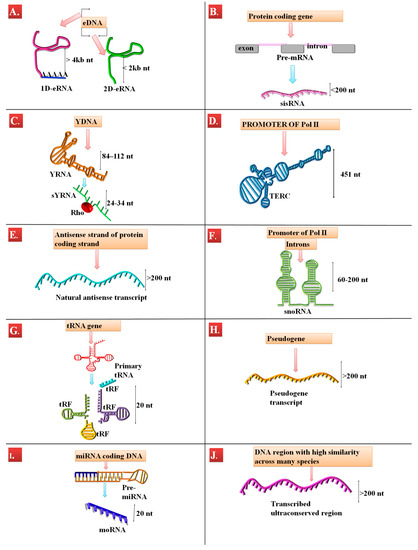