The technology to derive embryonic and induced pluripotent stem cells from early embryonic stages and adult somatic cells, respectively, emerged as a powerful resource to enable the establishment of new in vitro models, which recapitulate early developmental processes and disease. Additionally, pluripotent stem cells (PSCs) represent an invaluable source of relevant differentiated cell types with immense potential for regenerative medicine and cell replacement therapies. Pluripotent stem cells support self-renewal, potency and proliferation for extensive periods of culture in vitro. However, the core pathways that rule each of these cellular features specific to PSCs only recently began to be clarified. The Wnt signaling pathway is pivotal during early embryogenesis and is central for the induction and maintenance of the pluripotency of PSCs. Signaling by the Wnt family of ligands is conveyed intracellularly by the stabilization of β-catenin in the cytoplasm and in the nucleus, where it elicits the transcriptional activity of T-cell factor (TCF)/lymphoid enhancer factor (LEF) family of transcription factors. Interestingly, in PSCs, the Wnt/β-catenin–TCF/LEF axis has several unrelated and sometimes opposite cellular functions such as self-renewal, stemness, lineage commitment and cell cycle regulation. In addition, tight control of the Wnt signaling pathway enhances reprogramming of somatic cells to induced pluripotency. Several recent research efforts emphasize the pleiotropic functions of the Wnt signaling pathway in the pluripotent state. Nonetheless, conflicting results and unanswered questions still linger. In this review, we will focus on the diverse functions of the canonical Wnt signaling pathway on the developmental processes preceding embryo implantation, as well as on its roles in pluripotent stem cell biology such as self-renewal and cell cycle regulation and somatic cell reprogramming. View Full-Text
Keywords: Wnt/β-catenin pathway; embryonic stem cells; pre-implantation development; cell cycle; somatic cell reprogramming Wnt/β-catenin pathway; embryonic stem cells; pre-implantation development; cell cycle; somatic cell reprogramming
►▼ Show Figures 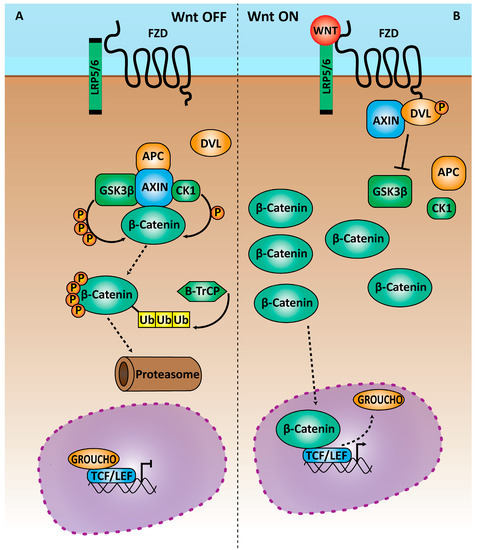