Small ribonucleic acids (RNAs) are known to regulate gene expression during early development. However, the dynamics of interaction between small RNAs and polysomes during this process is largely unknown. To investigate this phenomenon, 0–1 h and 7–8 h Drosophila melanogaster embryos were fractionated on sucrose density gradients into four fractions based on A254 reading (1) translationally inactive messenger ribonucleoprotein (mRNP), (2) 60S, (3) monosome, and (4) polysome. Comparative analysis of deep-sequencing reads from fractionated and un-fractionated 0–1 h and 7–8 h embryos revealed development-specific co-sedimentation pattern of small RNAs with the cellular translation machinery. Although most micro RNAs (miRNAs) did not have a specific preference for any state of the translational machinery, we detected fraction-specific enrichment of a few miRNAs such as dme-miR-1-3p, -184-3p, 5-5p and 263-5p. More interestingly, we observed changes in the subcellular location of a subset of miRNAs in fractionated embryos despite no measurable difference in their amount in unfractionated embryos. Transposon-derived endo small interfering RNAs (siRNAs) were over-expressed in 7–8 h embryos and associated mainly with the mRNP fraction. In contrast, transposon-derived PIWI-interacting RNAs (piRNA), which were more abundant in 0–1 h embryos, co-sedimented primarily with the polysome fractions. These results suggest that there appears to be a complex interplay among the small RNAs with respect to their polysome-cosedimentation pattern during early development in Drosophila melanogaster. View Full-Text
Keywords: maternal-to-zygotic-transition; Drosophila melanogaster; small RNAs; polysome maternal-to-zygotic-transition; Drosophila melanogaster; small RNAs; polysome
►▼ Show Figures 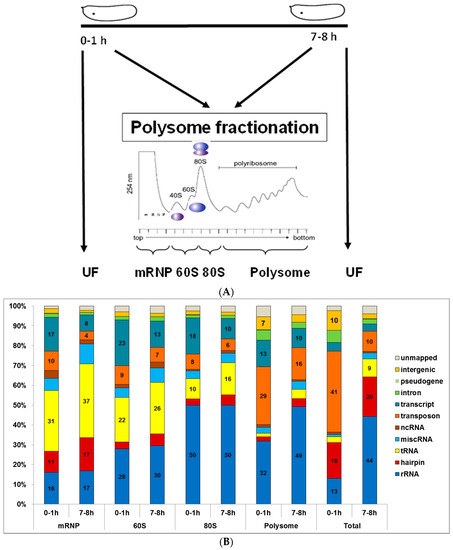