Celastrol, a natural triterpene, exhibits potential anti-inflammatory activity in a variety of inflammatory diseases. The present study aimed to investigate its biological effect on activated fibroblast-like synoviocytes (FLSs) from patients with rheumatoid arthritis (RA). The primary FLSs of the synovial tissues were obtained from synovial biopsies of patients with RA. The normal human FLS line (HFLS) was used as a control. After the RA–FLSs and HFLSs were treated with or without celastrol, various approaches, including the WST-1 assay, transwell assay, real-time PCR and ELISA analysis, were performed to estimate proliferation, invasion and expression of pro-inflammatory cytokines of the RA–FLSs. Microarray analysis was performed to screen for differentially expressed genes in RA–FLSs before and after celastrol treatment. The results showed that treatment of celastrol attenuated both the proliferation and invasion of the RA–FLSs. The expression of several chemokine genes, including CCL2, CXCL10, CXCL12, CCR2 and CXCR4, was significantly changed after celastrol treatment. The genes involved in the NF-κB signaling pathway appeared to be regulated by celastrol. View Full-Text
Keywords: celastrol; rheumatoid arthritis; fibroblast-like synoviocyte; chemokine; NF-κB signaling pathway celastrol; rheumatoid arthritis; fibroblast-like synoviocyte; chemokine; NF-κB signaling pathway
►▼ Show Figures 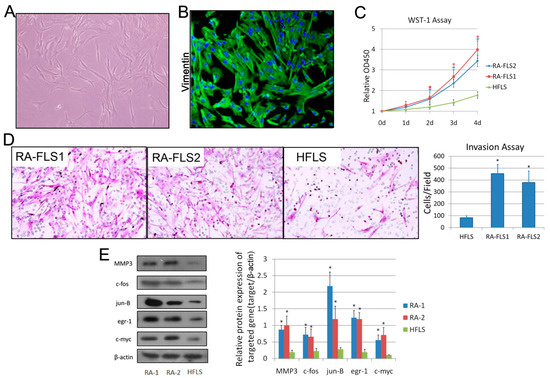